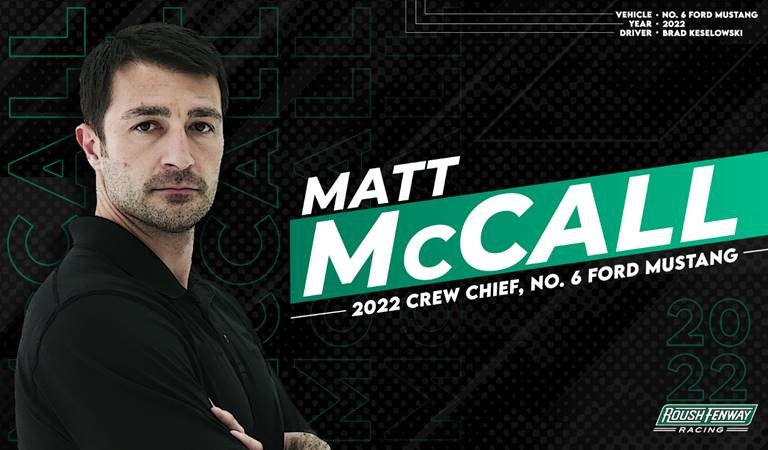 Veteran crew chief Matt McCall has joined Roush Fenway Racing and will lead Brad Keselowski and the No. 6 team in the NASCAR Cup Series beginning in 2022.

McCall is fresh off his seventh season in the NCS, a stint that most recently included working with 2004 NASCAR Cup Champion Kurt Busch. Prior to that, McCall worked with another former Roush Fenway driver, Jamie McMurray, for four seasons in NASCAR’s top series.

Under McCall’s leadership, the No. 1 team at Chip Ganassi Racing scored 97 top-10 and 30 top-five finishes including three wins, most recently Atlanta in 2021, as well as Las Vegas in 2020, and Kentucky in 2019. The Kentucky win marked the first of McCall’s Cup career. He also led the team to NASCAR Playoff appearances in six of his seven seasons.

Prior to joining CGR, McCall served as the lead race engineer on the No. 31 car at Richard Childress Racing, a team that finished the 2014 NCS season as runner-up in the final standings of the NASCAR Playoffs.

Outside of his work as a crew chief and race engineer, McCall is also a successful driver himself with over 60 victories in late-model stock cars, and has competed as a driver in both the NASCAR Truck and Xfinity Series.

A native of Denver, North Carolina, McCall is a graduate of the University of North Carolina at Charlotte. He and his wife, Meredith, and their two children reside in Denver.