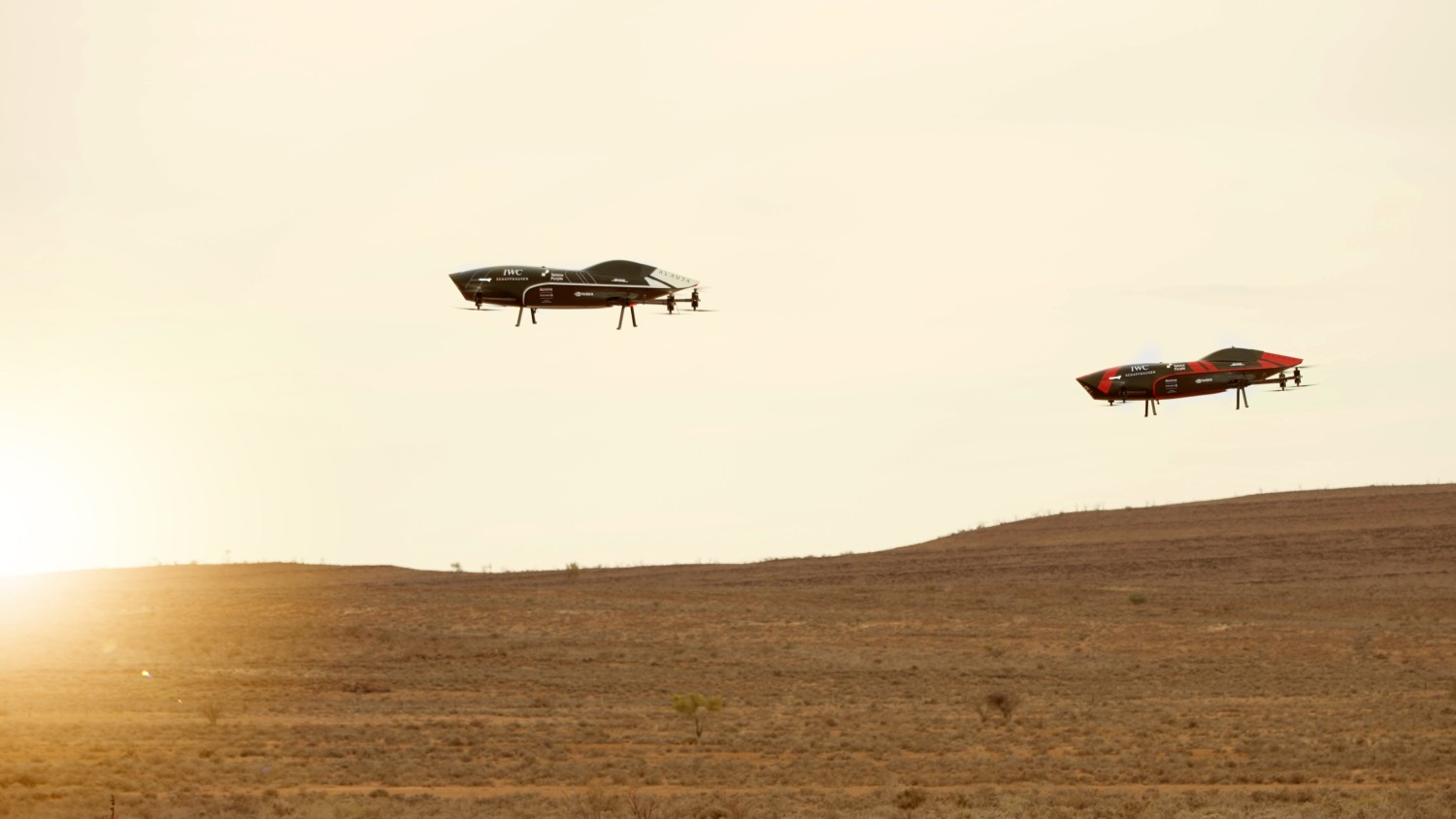 “We are on the cusp of making motorsport and mobility history with the world’s first electric flying car races. This test race provides the world a glimpse at the next generation of motorsport and mobility. This first test drag-race is a major moment in the creation of our sport and a giant leap forward for the development of electric flying cars.”
Matt Pearson, Founder & CEO, Airspeeder & Alauda Aeronautics

OVERVIEW:
A landmark moment in the future of motorsport played out in the deserts of South Australia last week as a pre-season test concluded with the first ever timed electric flying car drag-race.

The drag-race was part of a key pre-season testing session for EXA, Airspeeder’s first electric flying car racing season, created by Alauda Aeronautics. This historic moment provided a first glimpse of flying car racing as a sporting entity, ahead of international competition in 2022.

Race events will see a grid of full-scale electric flying cars known as Speeders race blade-to-blade in landscapes where motorsport has never been before. Teams from a broad range of industries will be provided with the Speeders but given technical and tactical freedom to approach gaining competitive edge in the series as they see fit. This will ensure close motorsport based on pilot skill and race management.

Fans from around the world will watch via global broadcasts with coverage enhanced by technology that communicates the virtual tracks and race telemetry data projected directly to pilots through augmented reality.

Because flying car racing does not require the same physical infrastructure as legacy motorsport, this presents a sport built from the ground-up with sensitivity to the global requirement to race with minimal ecological impact.

This first drag-race represented the culmination of intense internal competition between two-sides of the Alauda Aeronautics technical team. The result was a tense and visually enthralling encounter with the internal teams forced to adapt strategy in line with wind and dust conditions in the selected desert location. As races play out in varying conditions including over ice, over sea, deserts and even forest locations, mastery of external factors add a compelling tactical layer to the sport.

With the successful completion of this historic first drag-race, Alauda is poised to announce the world’s first electric flying car Grand Prix calendar under the banner of the EXA Series. These remotely piloted races will serve as a vital feeder series for the forthcoming crewed Airspeeder Grand Prixs. In addition to developing the technology that underpins the sport, it will be a breeding ground for the elite pilots that will pioneer the dawn of the electric flying car racing era.

These women and men are drawn from the very elite of motorsport, eSports and civil, military and acrobatic aviation. They will play the same role pioneer racing drivers did at the genesis of the automotive and aviation eras in accelerating a new mobility revolution. Indeed, the eVTOL (electric vertical take-off and landing) which is predicted to be worth $1.5trillion by 2040 has never been more vibrant.

Alauda Aeronautics has created the motor racing arm of this new form of transport and with it a place and a space for the industry to rapidly develop key safety, performance and digital technologies. This will hasten the arrival of electric flying cars that promise to liberate urban environments from congestion through a clean-air form of advanced aviation mobility.

THE DAWN OF A NEW SPORT:
“I gave (my drivers) three things: a sense of optimism, a creative environment and the ultimate motivator; competition. By competing with each other in-house we wound up beating our rivals.”
Enzo Ferrari

The Alauda Aeronautics engineering team is drawn from some of the biggest names in motorsport, performance automotive and aviation including Brabham, Boeing, Ferrari, McLaren and Jaguar. As such, natural competitive instincts kicked-in for an internal competition that saw the garage split to create this historic first timed drag-race.

For the first time, remote pilots were able to show the dynamic potential of the world’s first electric flying racing cars. The remote pilots were given free reign to plot their own flight-path to victory. The drag-race format was chosen as a pure demonstration of the performance and safety technologies that underpin the sport. In particular, the ‘Virtual Forcefield’ suite of LiDAR and RADAR powered safety systems that delivers close but ultimately safe racing. This will be heavily relied upon for full-grid circuit racing.

The Mk3 Speeders flew at over 100 km/h and heights of 10m above the ground. The garage was split into two teams with the red Speeder (team Bravo) crossing the line 3.2s quicker than its black liveried rival (team Alpha). The drag race took place over 400m distance, as per the traditional quarter mile drag racing protocol. As the race-craft move through their rapid development curves they will race at up to 300 km/h in full race specification.

These are key tests for the forthcoming EXA remotely piloted GP Season, the development series for the crewed Airspeeder Racing series that is set to take place in soon-to-be-unveiled locations in 2022 and beyond.

The EXA races will see teams drawn from across the world compete in the world’s first full-grid electric flying car races.

Airspeeder will soon make announcements on the first tranche of teams that have committed to these historic first electric flying car Grand Prix and the locations in which they will be staged.

THE STRUCTURE OF A SPORT
Airspeeder and Alauda Aeronautics are truly global operations. The sport’s technical HQ is in Adelaide, South Australia in direct proximity to the perfect testing grounds for a new form of aerial mobility.

The company’s commercial, communications and administrative HQ is in London, England and is led by CCO, Jack Withinshaw. This provides Airspeeder direct proximity to leaders in motor sport, rights management and regulation.

Alauda Aeronautics designs, engineers and builds the racing craft that participate in all Airspeeder racing events.

Airspeeder is the forthcoming crewed racing series. It will race across the globe in 2022.

AIRSPEEDER: ACCELERATING THE DEVELOPMENT OF A MOBILITY REVOLUTION:
Airspeeder is built on the philosophy that nothing accelerates technical progress like sporting competition. The next generation sport plays the same role the pioneers of Formula One did nearly a century ago in driving technical development and building public acceptance for a new mobility revolution. The eVTOL sector is primed to transform urban aerial transport, global logistics and even remote medical transport with a clean-air, zero emissions aerial transport solution.

AIRSPEEDER | ABOUT THE FOUNDER: MATTHEW PEARSON
Matt Pearson is the founder and visionary behind Alauda and Airspeeder. Together with a team of engineers, designers and commercial minds spanning Australia, New York and London, he is accelerating the development of electric flying vehicles through the white heat of sporting competition.

Beyond his role as a defining voice in the future of mobility, Matt is driving the rapidly expanding Industrial Internet of Things space through his work at Fleet. From their base in South Australia millions of devices are powered via Low Earth Orbit through a growing network of nano satellites.