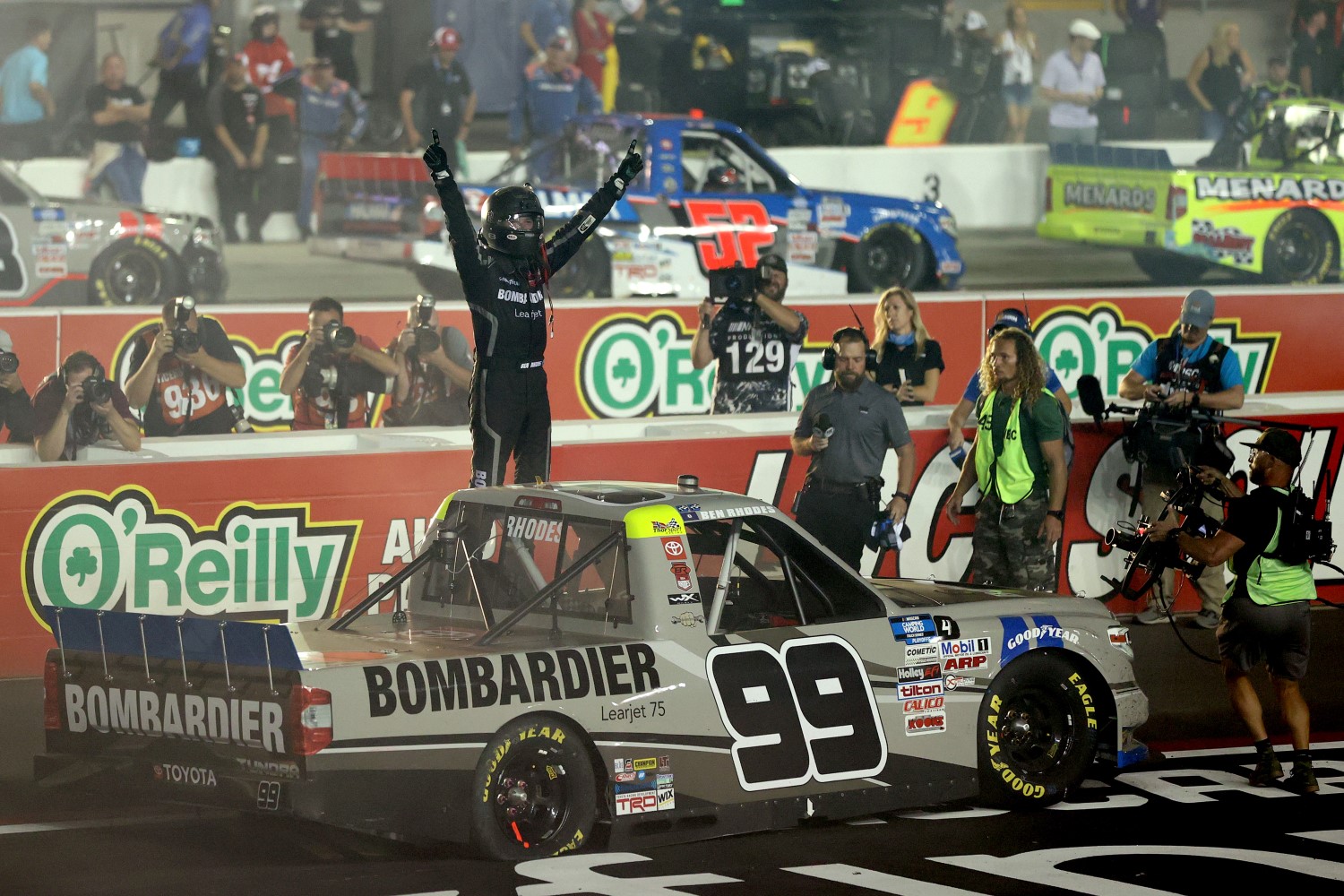 A bantamweight boxer in the training room, Ben Rhodes punched like a heavyweight on Friday at Phoenix Raceway.

On Lap 142 of 150 in the Lucas Oil 150 NASCAR Camping World Truck Series championship race, Rhodes tapped the tailgate of Zane Smith’s Chevrolet with the nose of his No. 99 ThorSport Racing Toyota, nudged Smith up the track in Turn 2 and made the pass that secured his first title.

At the time, the pass was for fourth place—as Chandler Smith was running away to victory in a No. 18 Kyle Busch Motorsports Toyota that featured superb long-run speed.

Rhodes, who uses boxing as the favorite part of his training regimen, eventually passed Sheldon Creed for third and held that spot to the finish, but he crossed the stripe ahead of the other three championship contenders—Smith in fifth, John Hunter Nemechek in seventh and Matt Crafton in 12th.

“That was the hardest last 40 laps I think I have ever driven in my life,” said Rhodes, who won the first two races of the season and none since. “I was doing things to the race car I probably shouldn’t have been doing. It was dumb, but I had everything to lose.

“And we brought it home and won it. I don’t even know what to say. This is crazy. Bookends for the season—I’m so proud of my ThorSport Racing group. This wasn’t like a vision we had, right, everyone wants to win it, but you just don’t know, it’s so hard. I just can’t thank (owners) Duke and Rhonda (Thorson) enough. They are the reason I’m here tonight.

Rhodes’ title was the fourth driver’s championship for ThorSport Racing, with Crafton having won the first three in 2013, 2014 and 2,019. It was the first owner’s title for ThorSport.

Entering the race as the favorite, Nemechek never had a chance. After a disappointing 16th-place qualifying effort, he scraped the wall in Turn 1 on the opening lap and got clipped on the left front by the No. 02 Chevrolet of Kris Wright.

Though Nemechek recovered the second of his lost laps as the highest-scored lapped truck under caution for Tate Fogleman’s stalled truck on Lap 101, he could drive up only to seventh before the finish.

“Yeah, I got run in to the first corner, got into the fence, somebody else ran in to us on the left side and this thing is killed pretty much,” Nemechek said. “Had a left front tire go flat, went down two laps, got both of our laps back, but just needed more laps, I guess. After all, felt we had the best truck tonight, Playoff-wise for sure.”

Zane Smith passed Rhodes for third place on Lap 110, five laps after the final restart. Though Chandler Smith got past both trucks during the final 45-lap run, Zane Smith held the championship position for 32 laps as Rhodes pursued and finally made the title pass.

“We were eight laps away from winning a championship,” said Zane Smith, who has not secured a ride for next season. “I tried to use all my tools from my side of the thing, but I just couldn’t turn. We fought that all night.”

Chandler Smith swept the first two stages and won for the second time in his career after taking the checkered flag at Bristol in September. In the process he clinched the Sunoco Rookie of the Year title.

The other Kyle Busch Motorsports team in Victory Lane with Chandler Smith. Second win of the year for Chandler as well as Rookie of the Year. How was your race?

“Yeah, for sure, first and foremost, All Glory to the Man Upstairs, without him, none of this would be possible. I wouldn’t have all these awesome relationships with all these guys, my racing family. This is my family. Also, he’s blessed me with a great family and being around great people and being able to come out to Phoenix Raceway in front of these fans tonight and be able to compete in high tier equipment. I’m just really blessed right now. Can’t thank Safelite, Toyota Racing, Danny (Stockman), KBM, Kyle (Busch), everybody that goes down the line to make this happen.”

You see the emotion out of Ben Rhodes. Ben, you started the season with a win at Daytona and you finish the season winning the Championship at Phoenix. You sir are the Camping World Truck Series Champion.

“That was the hardest last 40 laps I think I have ever driven in my life. I was doing things to the race car I probably shouldn’t have been doing, it was dumb, but I had everything to lose. And we brought it home and won it. I don’t even know what to say. This is crazy. Bookends for the season, I am so proud of my ThorSport Racing group. This wasn’t like a vision we had, right, everyone wants to win it, but you just don’t know, it’s so hard. I just can’t thank Duke and Rhonda (Thorson) enough. They are the reason I’m here tonight, Bombardier, Toyota, Menards, WileyX, we have so many people that help us, I can’t even talk right now I’m so excited.“