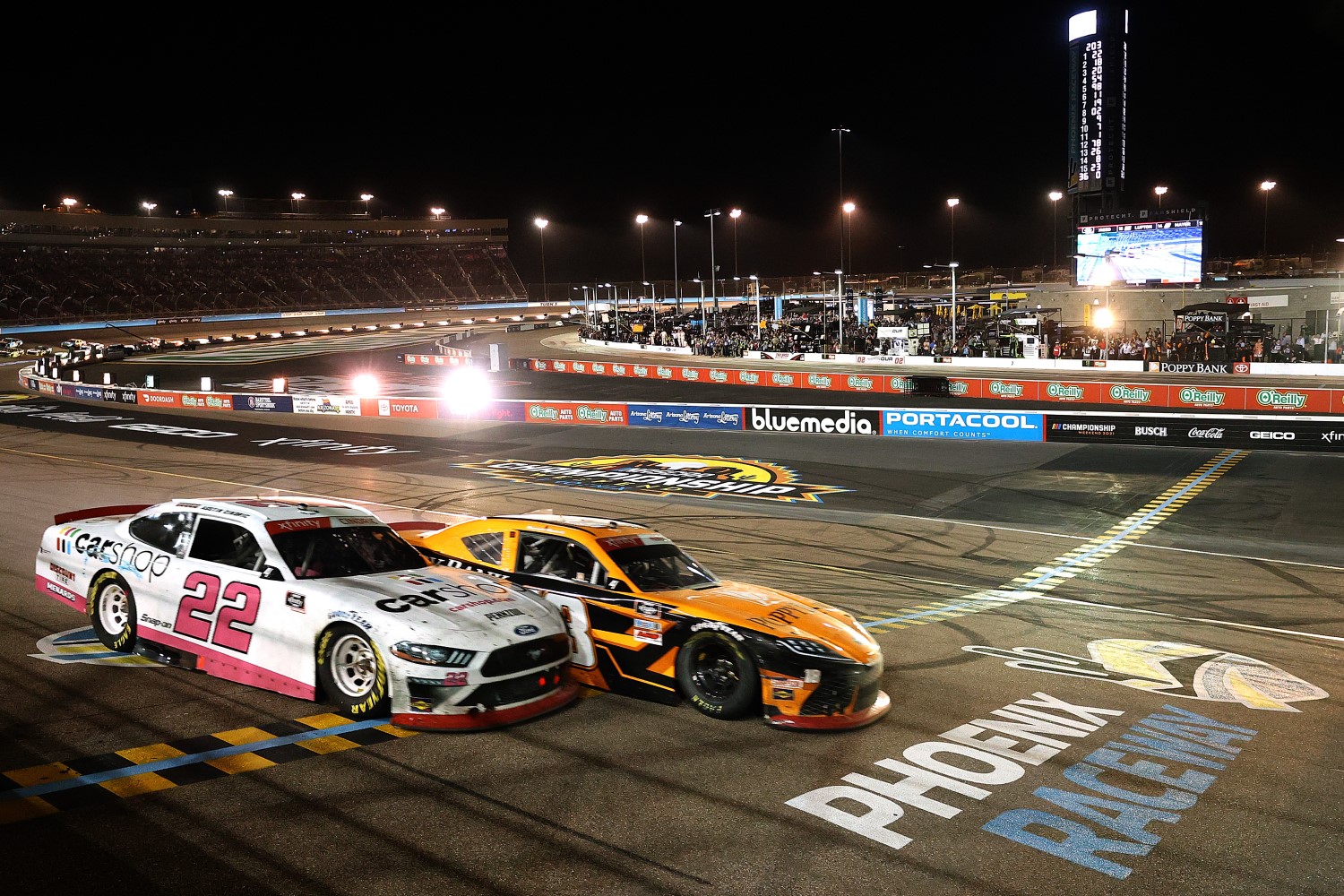 The 2021 NASCAR Xfinity Championship came down to a green-white-checker finish in Phoenix Saturday night.

The #18 Toyota of Daniel Hemric caught the #22 leading Ford of Austin Cindric on the last lap, put a door to Cindric’s Ford and took the lead in turn 4 to pass Cindric for the lead and win the race and the Championship.

Harrison Burton was third ahead of the #98 Ford of Riley Herbst while John Hunter Nemechek fell from 3rd to 5th on the last lap.

Hemric finished ahead of fellow Championship 4 drivers AJ Allmendinger, Austin Cindric and Noah Gragson in his No. 18 JGR Toyota to nab the 2021 crown. The championship marks Hemric’s first in any NASCAR national series and is the fourth for JGR in the Xfinity ranks after Daniel Suarez won the organization’s third title in 2016.

“Unbelievable. These guys right here have asked me all year how bad do you want it? We gave away one here in the spring. I felt like we had to give one up last week to get here. We were not going to be denied,” said Hemric.

“Thank you Dave Rogers (crew chief). Bill and Cindy Gallaher. Everyone at Poppy Bank. Will Gallaher. They took a chance on me in 2015 in some form or fashion. They stuck with me through times they probably shouldn’t have to be honest with you. I’ve been waiting a long damn time to do that. Thank you, Joe Gibbs, everyone at TRD, Toyota, Bell Helmets, everyone here that makes this program what it is. People doubted me. I would do it all over again for a night like this.“

“Until you spin somebody out, it’s not dirty racing,” said Cindric, who entered the championship event with five wins to his credit this season. “If everyone in the stands enjoyed it, it’s good racing.

“I’m appreciative of the opportunity to race on such a big stage, race for Roger Penske, represent Ford Performance, all of our sponsors that helped us this season. It would have been awesome to finish this out. I felt like we had a dominant race car, felt like we did everything right. Come up a little short.”

As a consolation prize, Cindric secured the Xfinity Series Owners Championship for Roger Penske with his runner-up result.

The other two Championship 4 drivers—Noah Gragson and AJ Allmendinger—were in contention at the end. Gragson slammed the wall shortly after a restart on Lap 193 and fell to 12th at the finish.

Allmendinger suffered a loose wheel late in the race and spun in Turn 2 on Lap 181, causing the eighth of 10 cautions. Cindric, who led a race-high 113 laps, had a commanding lead at the time, but the yellow bunched the field and set up the late-race shootout.

The 30-year-old Hemric had a steady regular season with several close calls as he hunted for a first victory. Among his season highlights were a pit road run-in with Gragson in March and then ending up on the wrong side of a battle for the lead with Kyle Busch in July. Coincidentally, both of those developments took place at Atlanta Motor Speedway.

In the playoffs, Hemric elevated his consistency with five top fives in the six races entering Phoenix and an average finish of 5.3 — second-best among the Championship 4 drivers. He had particularly strong runs in the Round of 8 at Texas Motor Speedway (second to teammate John Hunter Nemechek) and Martinsville Speedway (third to Gragson and Cindric).

In each of Hemric’s three full-time Xfinity Series seasons (2017-18, 2021), he reached the Championship 4. The first two came with Richard Childress Racing; he ran a partial schedule for JR Motorsports in 2020.

In addition to his Xfinity experience, Hemric spent the 2019 season in the Cup Series driving the No. 8 Chevrolet for Richard Childress Racing. The Kannapolis, North Carolina, native won the Sunoco Rookie of the Year award in the Cup ranks that season. He also drove two full seasons for Brad Keselowski Racing in the NASCAR Camping World Truck Series from 2015-16.

In 2022, Hemric will drive the No. 11 Kaulig Racing Chevrolet in the Xfinity Series. He will be the first reigning champion to drive for another organization since Tyler Reddick won the title for JR Motorsports in 2018 before moving to RCR the following year.

He climbs out not only as a winner in the Xfinity Series, but Daniel Hemric, you are the champion. Congratulations.

DANIEL HEMRIC: Lost my breath. Unbelievable. These guys right here, they asked me all year, How bad you want it? I gave one away here in the spring. Felt like I had to give one up here last week. We were not going to be denied.

Thank you, Dave Rogers, Bill and Cindy Gallaher, everyone at Poppy Bank, Lou Gallaher, JR, I’m talking to you. Man, they took a chance on me. 2015, some form or fashion. Oh, they stuck with me through times they probably shouldn’t have, to be honest with you.

How about those race fans? That backflip good enough for you? I’ve been waiting a long damn time to do that. Thank you Joe Gibbs, everyone at TRD, Toyota, Bell helmets. Everyone here that makes this program what it is.

I know I’ve given up a lot. People have doubted me. I’ll do it all over again for a night like this.

Take us through the last lap. You knew it was possible.

DANIEL HEMRIC: I’m blacked out. Blacked out. Just knew I had to be the first one to the line. I thought I let him get too much of a run off of four. Drove into one, knew I was close not to completely use them up, but we work our asses off for an opportunity like this. Excuse my language. This is what it’s all about, winning at the second highest level in all of motorsports. What an honor.

Unbelievable. I’d do it all over again. I’ll take all the heartbreaks again to live this right here.

You said in the car you’ll never have to answer that again because you are a winner.

DANIEL HEMRIC: Absolutely. That’s the greatest feeling in the world.

Austin, was that good racing?

AUSTIN CINDRIC: If everyone in the stands enjoyed it, it’s good racing. I’m appreciative of the opportunity to race on such a big stage, race for Roger Penske, represent Ford Performance, all of our sponsors that helped us this season.

It would have been awesome to finish this out. I felt like we had a dominant race car, felt like we did everything right. Come up a little short. Sometimes it’s like that way.

Unfortunately at the end of both seasonal championships this year, I’m getting obviously moved out of the way, endured. That’s hard racing. That’s why everyone enjoys watching this series, is because there’s a lot on the line.

Thankful for the opportunity. Pissed to be second for like the third week in a row.

For the overtime types of restarts, what is going through your mind?

AUSTIN CINDRIC: Yeah, I know my left rear bumper cover is vulnerable as ever. Obviously Daniel was in position to be the advocate of that. He certainly used it. He’s the champion because of it.

And you would honor his championship? You have to hand basically the baton over to him now. You can honor that?

AUSTIN CINDRIC: Yeah. He’s over there, I’m over here. He’s the champion.

It was a good year for you guys. You ran really well.

AUSTIN CINDRIC: Yeah, absolutely. This is why it’s so frustrating to come up so short. One lap is all you need. Maybe one restart. You never know.

But to make it this far, have the season we’ve had, the stats obviously show the consistency and the way our team has performed throughout the season, doesn’t matter the type of racetrack, I work with some of the best people in the sport. I’m a better driver because of it.

You did win the Owners’ Championship so you have that trophy to present to the team.

AUSTIN CINDRIC: That’s certainly poetic. Obviously this 22 car has won so many Owners’ Championships over the years with so many great drivers. My first race in the 22 car was in 2017, they won the Owners’ Championship then. I guess I get to close that one out as ironic as that might be.