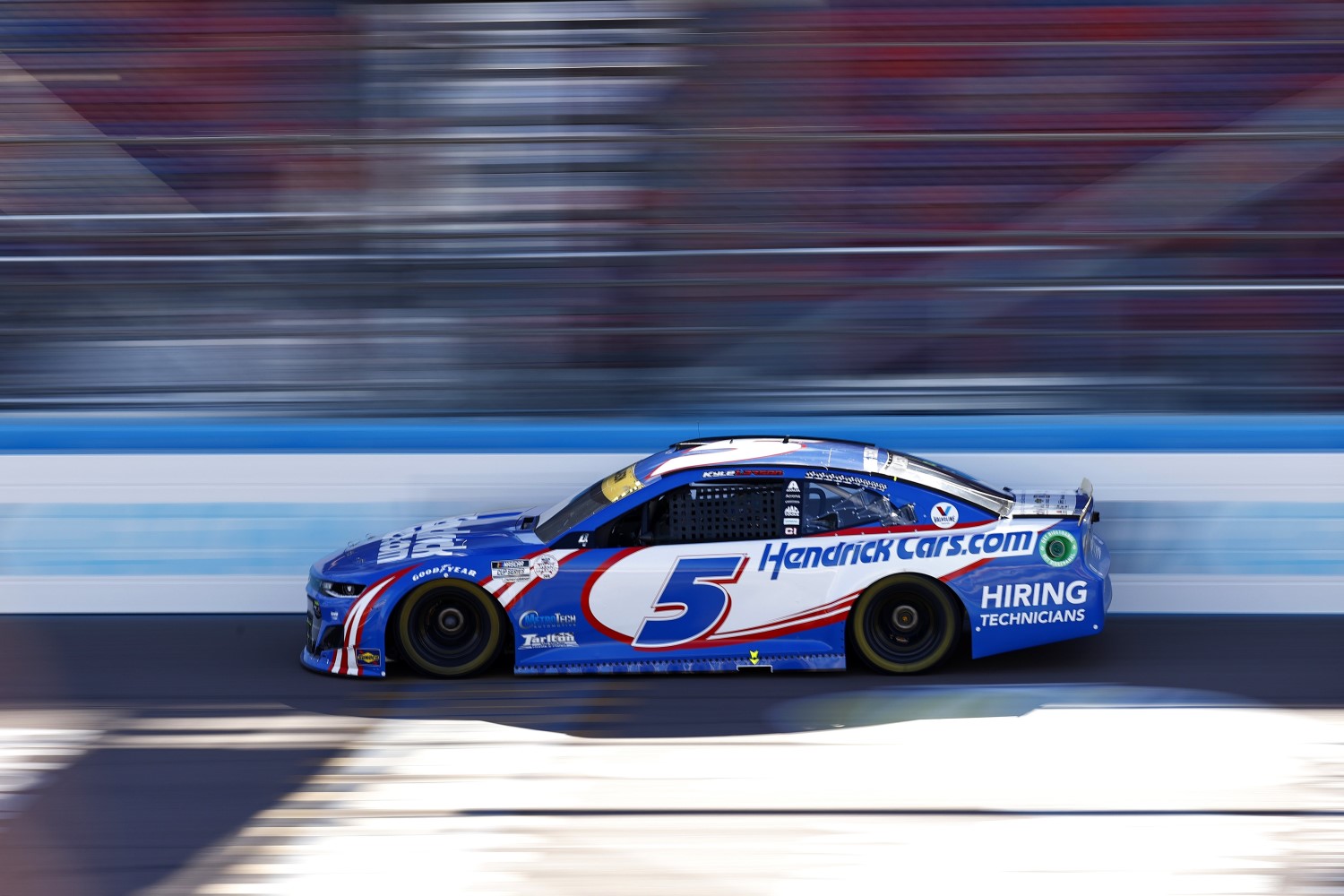 Kyle Larson, the best American driver of this era, and the man who completely dominated the 2021 NASCAR Cup season, did it again on Sunday at Phoenix, winning his 10th race of the year (11th including the All-Star race) and with it his first Cup title.

Larson’s pit crew gave him the lead on the final pitstop with 28 laps to go and Larson did the rest by getting the jump on the Toyota of Denny Hamlin and then out dueling the Toyota of Martin Truex Jr. to win by 0.398s in his #5 Hendrick Chevy.

Ryan Blaney passed the other title contender, Chase Elliott, late to take the 4th spot ahead of a defeated Elliott.

Larson finished ahead of his fellow Championship 4 contenders — defending champion Chase Elliott, Martin Truex Jr. and Denny Hamlin — at the 1-mile track to claim the crown in his first season driving the No. 5 Hendrick Motorsports Chevrolet.

It is the 3rd time Truex Jr. has finished second in the championship.

For a while late in the race, it did not look like Larson had the speed to win when running in dirty air, but his car ran better in clean air and his pit crew got him the lead and the clean air he needed to drive to the win on the last pitstop.

A caution with 65 laps remaining for Anthony Alfredo appeared to put Truex in good position. Truex and the No. 19 team elected to hit pit road early to start the cycle, but the yellow flag waved as he entered his stall. But when the field was frozen after the caution, Truex was still scored on the lead lap, which gave him the lead for the following restart.

Larson, 29, from Elk Grove, California, took his career to a new level in 2021. The veteran driver more than doubled his career wins total this season, entering ’21 with six since his first full-time season.

By essentially every measure, 2021 marked Larson’s best season — and one of the best in modern NASCAR history. He’s one of just 17 drivers to win eight or more times in a year at the top level, joining a host of NASCAR Hall of Famers to do so.

This was the Kyle Larson who watched last year’s Cup championship race from afar after drawing a suspension from NASCAR and losing his ride with Chip Ganassi Racing for using a racial slur during a non-NASCAR-related virtual race in April 2020.

But after Larson did yeoman work to earn reinstatement, team owner Rick Hendrick hired the virtuoso driver, who won 46 dirt races in multiple divisions during his absence from NASCAR.

Hendrick’s decision paid immediate dividends and culminated in the 14th series championship for the organization (series-most).

Larson started out the 2021 season with a 10th-place finish at the Daytona International Speedway before picking up his first win since 2019 just three races later at Las Vegas Motor Speedway. From there, it quickly became evident he would be a force this season.

The No. 5 driver put together the best three-race stretch of anyone this year from Charlotte Motor Speedway to Nashville Superspeedway, winning a crown jewel, his first road-course victory and the inaugural Cup race at the Music City track.

He added another over the summer, holding off Hendrick teammate Chase Elliott for another road win at Watkins Glen International before scoring another three in the playoffs (Bristol Motor Speedway, Charlotte Roval, Texas Motor Speedway) leading up to Phoenix. Larson also won at Texas earlier this year in the All-Star Race.

Larson is signed on again to drive for Hendrick next year, along with his three ’21 teammates, positioning the longtime organization to once again compete for the title as NASCAR enters its Next Gen era.

Here he is, climbing out of the car, celebrating with his team, Kyle Larson. Congratulations. You are a Cup Series champion.

KYLE LARSON: Let me get a drink here real quick. I can’t — I cannot believe it. I didn’t even think I’d be racing a Cup car a year and a half ago. To win a championship is crazy.

I’ve got to say first off thank you so much to Rick Hendrick, Hendrickcars.com, Jeff Gordon, NASCAR, every single one of my supporters in the stands, watching at home, my family. I’ve got so many of my friends and family here. My parents, my sister, my wife and kids. Owen had been giving me crap a month and a half ago about how I can’t win a Cup race when he’s there, so that added a lot of pressure.

There were so many points in this race where I did not think we were going to win. Without my pit crew on that last stop, we would not be standing right here. They are the true winners of this race. They are true champions. I’m just blessed to be a part of this group. Every single man or person, man and woman at Hendrick Motorsports, this win is for all of us, and every one of you.

This is unbelievable. I’m speechless.

When you crossed the finish line with those tears in your eyes, did you think about that day your dad brought that go-kart home without telling your mom and that moment led to this?

KYLE LARSON: I had a lot of thoughts, a lot of thoughts there those last — really since before intros, right before intros it all hit me. I had tears running down my face just doing the ride-around. The crowd was cheering loud, and it was just a different atmosphere than I’ve ever been a part of.

This event was crazy. This format is wild. I’m glad we were able to get it done. And yes, a big shout-out to my parents for getting me involved in racing, my dad for everything he did, building my go-karts when I was young to get me playing around, my mom for videotaping every lap I ever raced and giving me something I could look at and study and get better.

Gosh, so cool, I cannot believe it.

He was probably the one that gave the biggest challenge to Kyle Larson there late, got so close in those waning laps. What more did you need to go and pass that 5?

MARTIN TRUEX JR.: I don’t know, the clean air seemed to be a good bit of an advantage. Whoever got out front was good for 20, 30, 40 laps, and then the long run cars would start coming around.

I don’t know, ultimately we needed to beat him off pit road. It’s unfortunate, but we win and lose as a team. And really proud of our efforts this year. Just big thanks to everybody that makes it possible, Bass Pro Shops, Auto-Owners, Reser’s Fine Foods, Toyota TRD, Sherwin-Williams, Oakley, Textron, Noble Aerospace, all our partners.

That’s three times we’ve been second, and that sucks. Second hurts I’m not going to lie, especially with the car we had and the job the guys did.

That’s racing, as they say, and sometimes you’re just not on the right end of things. We were on the right end to things to get the lead there and weren’t able to hold on to it. If we could have had the lead, I think it would have been over, but that’s kind of how the 5 did it, too. So they had a hell of a season and congrats to them.

Gosh, second sucks. I hate it.

I saw you take a moment there in the car and just sort of collect your thoughts. What was going through your mind when you pulled up here to a stop?

Then at the end there, not quite enough speed to get to the 5 and then around him. I thought if he’d have stayed on the bottom a little bit longer, I’d have had a shot. But he moved up, and I couldn’t do anything on the bottom.

It is what it is. They did a great job, they had a great season, like I said, congrats to them, and come back and try next year.

A piece of debris changed everything. How close were you to getting this done?

DENNY HAMLIN: Yeah, certainly I really liked where we were at with about 25 to go. We were just exceptional in the long run, which wasn’t too surprising, but started running the 19 back down there and got within a couple car lengths and obviously that debris caution changed a lot.

Special congrats to Larson and his team. Those guys, any time you can win 10 races in a year, you’re absolutely a deserving champion. They did a great job on the last pit stop and got him out there, and it was just set sail after that.

Proud of my team. Really great effort adjusting on the car all day, getting it so much better, and thank our partners in Toyota, FedEx, Coca-Cola, Jordan Brand. Just a really good year. A really, really good year, and things just didn’t pan out.

We needed that thing to go green those last 25 laps, and it didn’t.

You led 94 laps today, and once you lost the lead when that caution came out, couldn’t get it back. What more did you need to do battle at the end?

CHASE ELLIOTT: Yeah, maybe just the right set of circumstances. I felt like our NAPA Chevy was really good, and I thought our team did a really good job preparing this week. I was really proud of our group. I thought we brought a really good car and did a lot of things that we were wanting it to do today, just didn’t work out, and the sequence of the way all that went certainly was unfortunate for us.

But look, proud of our team, a lot to build on, and also congrats to Kyle and Cliff. What an amazing season. Very, very deserving champions, and glad to see Kyle have success.

When you’re a good driver and a good person and you surround yourself with good people, success is warranted. It’s good to see that. But we’ll be back stronger next year and try to give them a run.