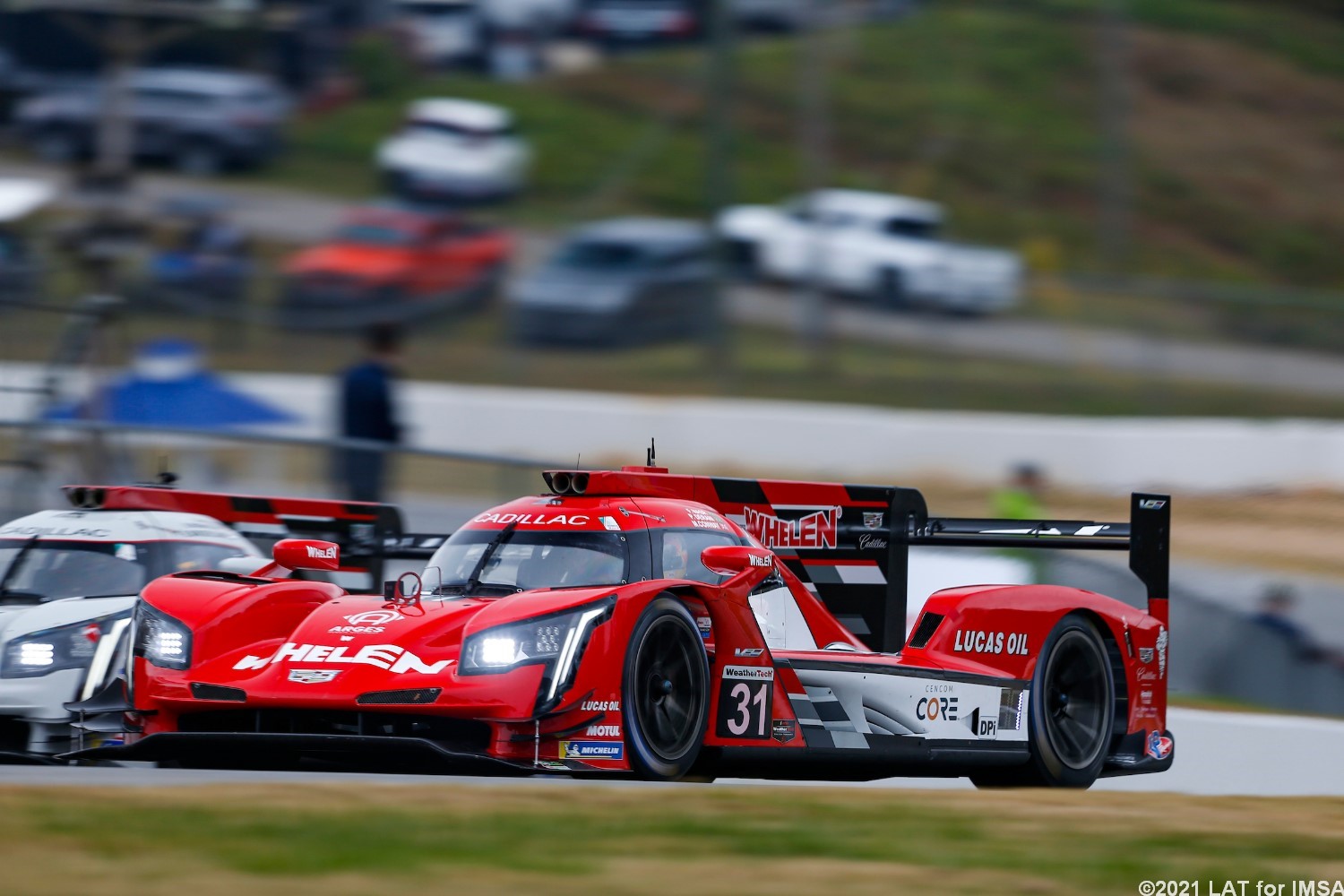 Felipe Nasr had the wheel of the No. 31 Whelen Engineering Cadillac DPi-V.R and posted a fast lap of 1:08.678 that will have him starting from pole, the team’s fifth of the season. Nasr was able to garner the maximum 35 points for the effort helping the team in their quest to win the driver’s and team championship tomorrow.

“I had a good lap,” Nasr said. “The Whelen Engineering Cadillac was fast in the cool conditions. I actually had a dream a few nights ago that I would get the pole. It was tough going up the hill into the sun, it was blinding. I managed to keep it on the track and get the pole. The Action Express Racing team is really dialed in and focused this weekend. Pipo (Derani) and Mike (Conway) are motivated and we are ready for the race tomorrow.”

Sebastien Bourdais, driving the No. 05 Mustang Sampling Cadillac DPi-V.R, made a last lap run and put in a time of 1:08.848 that will have him starting third on the DPi grid. He will handoff to Loic Duval and Tristan Vautier over the 10-hours of racing tomorrow.

“We decided to go with as little fuel as we could and shorten the session a little bit,” Bourdais said. “You needed enough laps to get up speed and temperature. I did a couple of good laps. I sent it two laps to the end and I got the curb at the exit of Turn 6 and got into 7 too hot and ruined the lap. Turn 3 was really treacherous, you would hit the inside curb and you didn’t know where you landed with the sun in your eyes. You could only see where you landed, but you didn’t know where you were. It was cold, so the engines were making a lot of power. It was nice to be out there. Wish I could have completed that lap and put the Cadillac on pole for the JDC-Miller guys. It is good that the 31 Cadillac got the pole for the Championship. There are a lot of Cadillacs between the 31 and the 10 so that is good.”

The No. 48 Ally Cadillac DPi-V.R was qualified by Kamui Kobayashi. Kobayashi was turning good lap times and getting faster until he got caught out by the glare in Turn 3 and spun into the grass. Taking a cautious approach, he pitted the car and stood on his lap time of 1:09.165 good for sixth on the grid. He is teamed with seven-time NASCAR Champion Jimmie Johnson and IndyCar’s Simon Pagenaud.

“It was a bit challenging out there,” Kobayashi said. “I was able to build up to some good laps. I came over the hill and the sunlight hit me and I just spun. I didn’t flat spot the tires. The Ally Cadillac is fast and we will see what happens tomorrow.”

Kevin Magnussen had the wheel of the No. 01 V-Performance Academy Cadillac DPi-V.R for the 15-minute qualifying session. The Dane put in a lap of 1:08.879 on his last flyer that will have he, Renger van der Zande and Scott Dixon starting fourth.

“It was cool temperatures in qualifying,” Magnussen said. “The car was good, but you had to be cautious up into Turn 3 with the sun. I was able to put in a pretty good lap to start fourth. We have a good Cadillac, tomorrow is when they give out the trophies.”

LMP2 class pole went to the No. 52 PR1/Mathiasen Motorsports Oreca 07 Gibson of Ben Keating, despite a spin during the session for the Texan.

Under cold conditions the battle for the last pole of the IMSA GTLM era was fought to the last lap of the 15-minute qualifying session. Campbell had the wheel of the No. 79 WeatherTech Racing Porsche RSR and posted a lap of 1:15.738 good for second place on the final GTLM grid.

“I did my best possible job in qualifying, but the BMW was quite fast,” Campbell said. “I think we can make a few adjustments to the car with the Proton Competition guys and girls to improve the car. P2 is not a bad position to start. The night will be a little unknown tomorrow as it will be colder. We didn’t have as much night running as we would have liked last night. I think the car will improve in the night, so that can work to our favor.”

Frédéric Makowiecki (France) had the controls of the No. 97 WeatherTech Racing Porsche RSR for the session. He had an early spin which affected the tires and his remaining time on the track, but he managed to put in a lap of 1:16.004 that will have him starting directly behind the 79 on the grid for tomorrow’s 12:10 p.m. ET start. Makowiecki is joined in the car by Kévin Estre (France) and Michael Christensen (Netherlands).

“I am not so happy about my own performance in qualifying,” Mackowiecki said. “We didn’t have the speed for the pole. We couldn’t find the solid rear that we had in free practice. I had an early spin and that didn’t help the tires. Let’s see if we can make the car easier to drive for tomorrow. We have a good starting position for the race.”

Madison Snow claimed pole in GT Daytona, while Jack Hawksworth set the quickest lap in the final outing of the two-stage qualifying format.