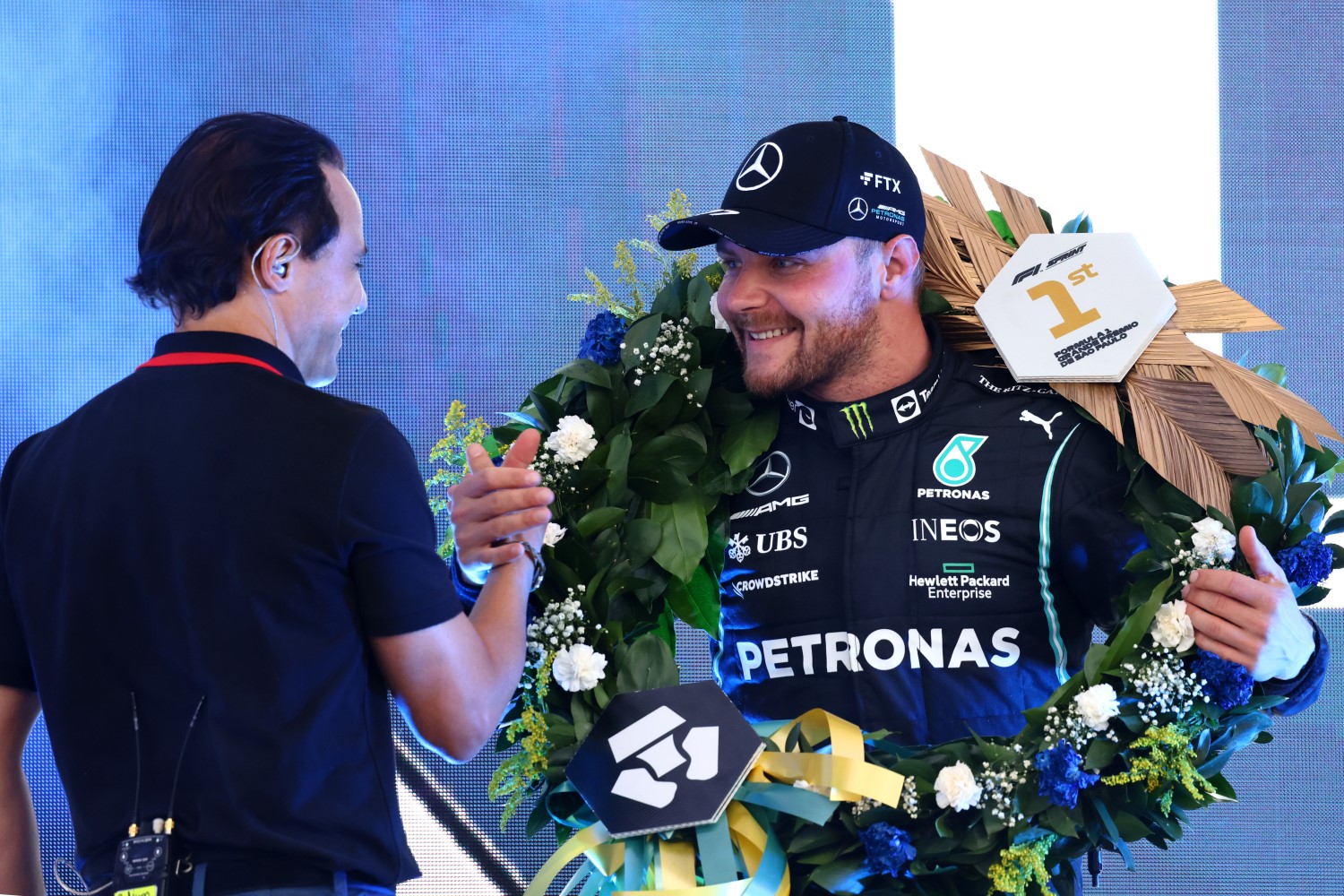 Valtteri Bottas, using his red Pirelli tires and their better traction took the lead at the start of the Brazil Sprint Qualifying race and was never challenged as he won over Max Verstappen by 1.170-second.

As a result, Bottas will start on pole Sunday, with Max Verstappen alongside.

With his 2 points for 2nd today, Verstappen extends his point lead over Hamilton to 21.

Lewis Hamilton was the star of this race, starting last he finished 5th, which means with his 5-grid penalty will start 10th on Sunday.  Hamilton’s car was so fast today that on Sunday there is a good chance he can still win going away.  His Mercedes has incredible straight-line speed as that new trick Mercedes engine is working well.

“It’s not over yet,” Hamilton radioed to his team after the finish today.

Carlos Sainz Jr. also used the soft red tires to hold off Sergio Perez for 3rd today, ahead of Perez and Hamilton.

A happy Bottas said, “The start was key for me, to have a great start. We gambled on the soft tire. It was tricky in the end, but Max struggled to follow in certain corners.”

“The start itself wasn’t the best, but we were also on the harder compound, which didn’t help. The pace felt good but around here once you close up you can’t really pass. We try again tomorrow,” said Verstappen.  Well, maybe he could not pass, but Hamilton was blowing past cars on the straight like they were standing still.  That will be telling on Sunday.

“The start was great, I needed one – starts have been an area I wanted to improve,” said Sainz. “The first three corners I just wanted to attack, it was tight with Checo and Max but we made it work. I managed to keep Checo behind, the pace was good, and we managed on the tires.”

To sum up, Bottas is on pole for the Sao Paulo Grand Prix, with free tire choice. He’ll have Verstappen alongside, as Sainz and Perez share the second row.
The third row will be Norris and Leclerc, with very little on paper to choose between McLaren and Ferrari here.
Hamilton will be P10 on the grid, and he’ll have Vettel and Ocon first on the road to overtake should they stay ahead at the start, and will then have to insert himself into the Ferrari – McLaren squabble.

Valtteri Bottas
Today the start was the key thing for me and I got a good one! We gambled a little bit with the soft tire. We knew that it would be a benefit for the start and it worked and it was all about trying to survive until the end. It was quite tricky in the final laps but Max still struggled to follow in the corners, so I’m glad it worked out perfectly. The support here from the fans has been amazing here, so thank you as well to everybody who came out today!

Lewis Hamilton
Honestly, I had no idea what was possible today – I didn’t set a limit or a maximum. When I was at the back of the grid at the start before we pulled away for the formation lap, I think I might have been able to see like, 10, and I was like ‘okay, that’s my goal, I’ve got to try and get up as far as possible’ but then all of a sudden, I was chipping away at it much faster, and I really used a lot of different things for motivation today. I just never give up, you can’t ever give up. It has been tough today: while the team was working away, talking with the stewards, I was just trying to focus on my work with my engineers and keeping the morale with my mechanics high and just focusing on the job at hand. Not thinking about it. Of course, it was devastating when I heard about the verdict, but you can’t let that hold you back. You’ve got to keep your head down and keep going. I quickly reset, got my mind focussed on doing what I could do and just giving it my everything.

Toto Wolff
Sometimes after the greatest frustrations with this sport, you can forget the politics for a moment and watch great racing. Valtteri was totally in control today – a great car, the right tires, good straight-line speed – and he was just brilliant, not letting the other guy close. As for Lewis, he made 15 overtakes to finish P5, and it was a fantastic drive. Looking at the penalty: the car was tested yesterday and then two hours before today’s race, we got the information that we had been disqualified. That was disappointing because there is a modus operandi in the sport, and we had a car that we do not consider was in breach of the technical regulations. In the past, we have seen teams given permission to repair this kind of failure, and at the last two race weekends, we have seen permission granted to make repairs to damaged wings during the qualifying session, which equally operates under parc fermé. We believe our wing was damaged on track, but instead we were reported to the Stewards. After that, the Stewards did the job they were asked to and their argument needs to be respected; therefore, we decided not to appeal, also because it would have put the entire weekend’s results at risk, and we must take it on the chin and understand that this goes both ways. Looking to the Grand Prix, I believe we have a good car, and it was encouraging to see we can overtake, although it will be a different game tomorrow in hotter conditions. Lewis will start P10 with his engine penalty and Valtteri will be on pole and gunning for the win. It’s certainly a much more encouraging picture than it looked to be before the sprint race.

Andrew Shovlin
It’s been long, busy and difficult day, but we finished on a high. A fantastic drive from Valtteri to secure pole for tomorrow. It was a calculated risk starting on the soft tire, but it worked well for us in the morning and the grip off the line helped us take the lead. Valtteri then had his work cut out to hold Max at bay with a tire that ultimately has more degradation, but he managed it brilliantly. Lewis had an equally impressive race; finding out that you have been moved from P1 to P20 shortly before the race starts is not an easy outcome to deal with, but he attacked every inch of the way and has put himself back in contention for a strong result tomorrow. It was also encouraging to see the car working so well again, the conditions were quite cool and that may have helped us to follow closely, but it certainly seems that we have good pace around this track. Winning these championships will be one of the toughest challenges we have ever faced but today reminds us why we must never give up.

Max Verstappen
“We started on the harder compound and as soon as I saw Valtteri was on the softs I knew it would be quite tricky to keep position, especially in these colder track temperatures. After the first lap we had good pace but it’s hard to overtake here and the tires overheat a lot so there’s not much you can do so I ended up sitting behind. At the end of the day I always try to do the best I can and it was good to score a few points today. Tomorrow is the important day and it will be different when we have more options with pit strategies. Let’s see what happens tomorrow, it’s going to be quite a bit warmer so hopefully that will be better for us but it’s difficult to say at the moment.”

Sergio Perez
“It was difficult to get past Carlos Sainz today, I thought I was going to get him quite easily, but I couldn’t get the exit right in the final corner and that effected my ability to pass him. We were expecting to hold them back at the start but that wasn’t the case in the end. The main issue I was having today was that Sainz was always getting a good exit out of the final corner while my tires were overheating. The straight-line speed of the Ferrari was quite strong too. Tomorrow is the race that matters, there is still a lot to play for and we can take more risks than today. I could have made up that position today but it would have involved taking too many risks, more than I would like. I would like to move forwards in the race tomorrow, we will be pushing from the start and try to make the progress we want. It’s important to have a good starting position tomorrow and then work from there, I hope I can get through the Ferrari quickly and have good pace from lap one. We will learn from what we have done today and be stronger tomorrow.”

Christian Horner
“We got two points today and they will be vital in the championship battle, so that’s a positive. Mercedes’ speed today is no great surprise, it has been coming for a few races now. In Turkey it started to appear and in Mexico their straight-line speed was about 14km quicker than us at the end of the straight. We saw it again yesterday, and in a straight-line nobody can live with them. But tomorrow is a different race. It looks like track conditions will be hotter and strategy will be key, we need to get a good start into turn one. We were on the medium tires today, and so we still have the softs to come, and as always in Brazil, anything can happen come race day. We’ve got to get our heads down and concentrate on what we do. We need to have both cars up there challenging for points. We are on the front row with Max and Checo is right behind him, so we are going to go for it and see what we can come away with.”