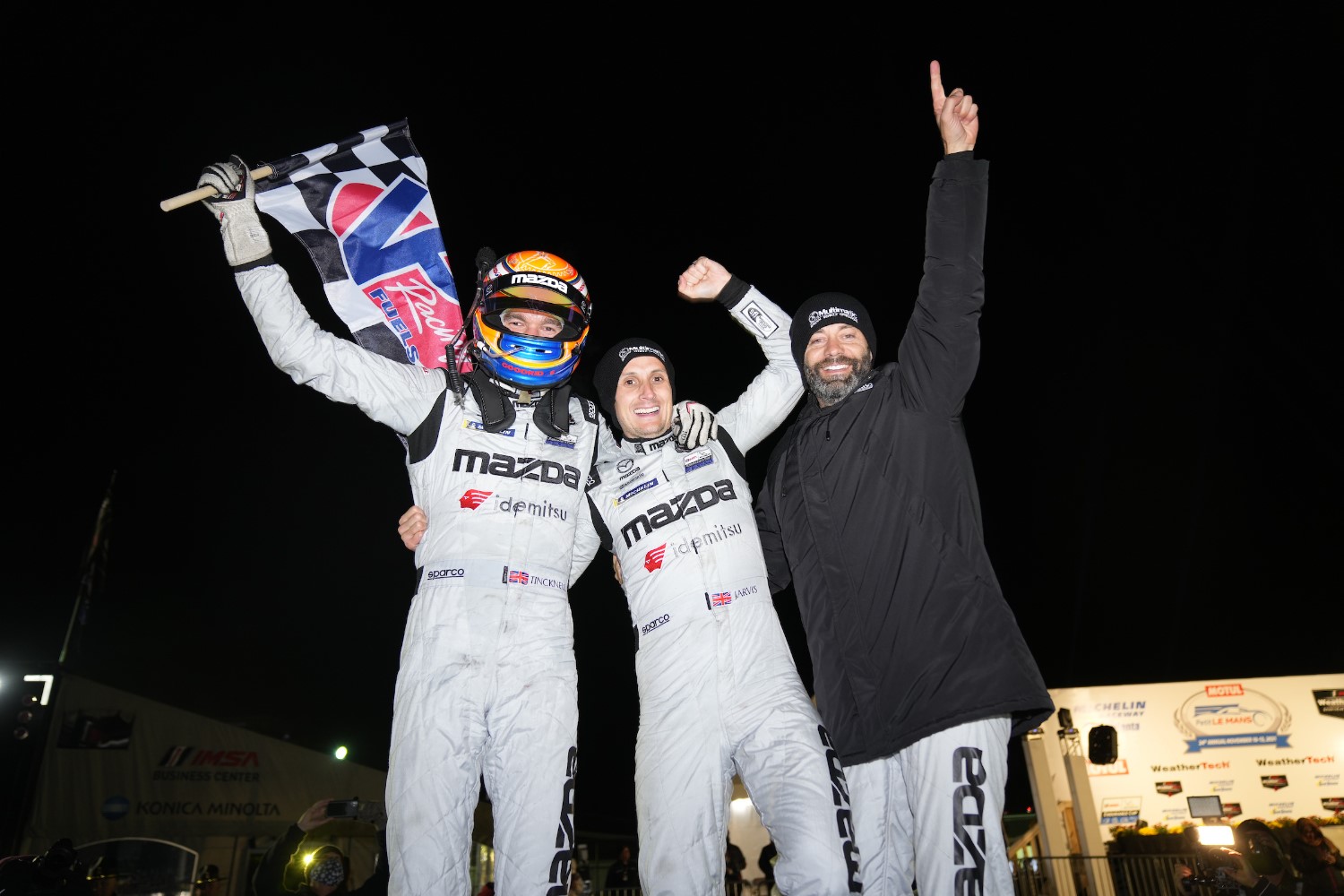 Harry Tincknell drove his #55 Mazda to victory (with teammates Oliver Jarvis and Jonathan Bomarito shown above) in Saturday’s 10-hour Motul Petit Le Mans in the manufacturer’s final DPi race while a second place finish for Felipe Nasr and Pipo Derani was enough for the Brazilian duo and Action Express Racing to claim the IMSA WeatherTech SportsCar Championship DPi title.

Tincknell made a move around Nasr for the lead with 22 minutes to go, rebounding from an engine-related issue that put the car three laps down in the early stages.

Nasr, meanwhile, held off a desperation dive by Ricky Taylor on the final lap to end up just 0.405 seconds ahead of the No. 10 Wayne Taylor Racing Acura ARX-05, which entered the race with an eight-point lead over the No. 31 Action Express Racing Cadillac DPi-V.R.

On the last lap Taylor dived into the inside of Nasr into Turn 10a — briefly taking the position — before losing it while sliding his Acura DPi through the gravel.

Taylor and co-drivers Filipe Albuquerque and Alexander Rossi were credited with a third place finish in the race.

Tower Motorsport inherited the LMP2 class win after a post-race time penalty for the No. 52 PR1/Mathiasen Motorsports Oreca 07 Gibson of Mikkel Jensen for contact with Gabriel Aubry on the final lap.

Jensen crossed the line ahead of the Frenchman in the Starworks-run Oreca but was demoted to second in the results after having 37 seconds added to the car’s finishing time due to failing to serve a drive-through penalty for incident responsibility.

The Dane and co-driver Ben Keating clinched the LMP2 class title by just starting Saturday’s race. They shared the car with Scott Huffaker.

LMP3 race and championship honors went to the No. 74 Riley Motorsports Ligier JS P320 Nissan of Gar Robinson, who shared the class win with Scott Andrews and Felipe Fraga.

Fraga finished one lap ahead of the No. 30 Jr III Racing Ligier of Spencer Pigot, who along with co-drivers Ari Balogh and Garett Grist, finished second in class.

It should be noted that a spread-too-thin Andretti Autosport team finished dead last in LMP3.

Jaminet took the checkered flag just 0.318 seconds ahead of Kevin Estre in the sister WeatherTech Porsche 911 RSR-19 after late contact between Nick Tandy and the overall winning Mazda DPi cost the No. 4 Chevrolet Corvette C8.R a potential second place.

The Heart of Racing claimed the class victory with its Aston Martin Vantage GT3 driven by Ross Gunn, Roman De Angelis and Ian James, while the GTD season title went to the Pfaff squad ( Laurens Vanthoor, L. Kern and Zach Robichon), which arrived at Michelin Raceway Road Atlanta as the points leader.

Gunn crossed the line 7.857 seconds ahead of Vanthoor after a battle between the pair during the last couple of stints.