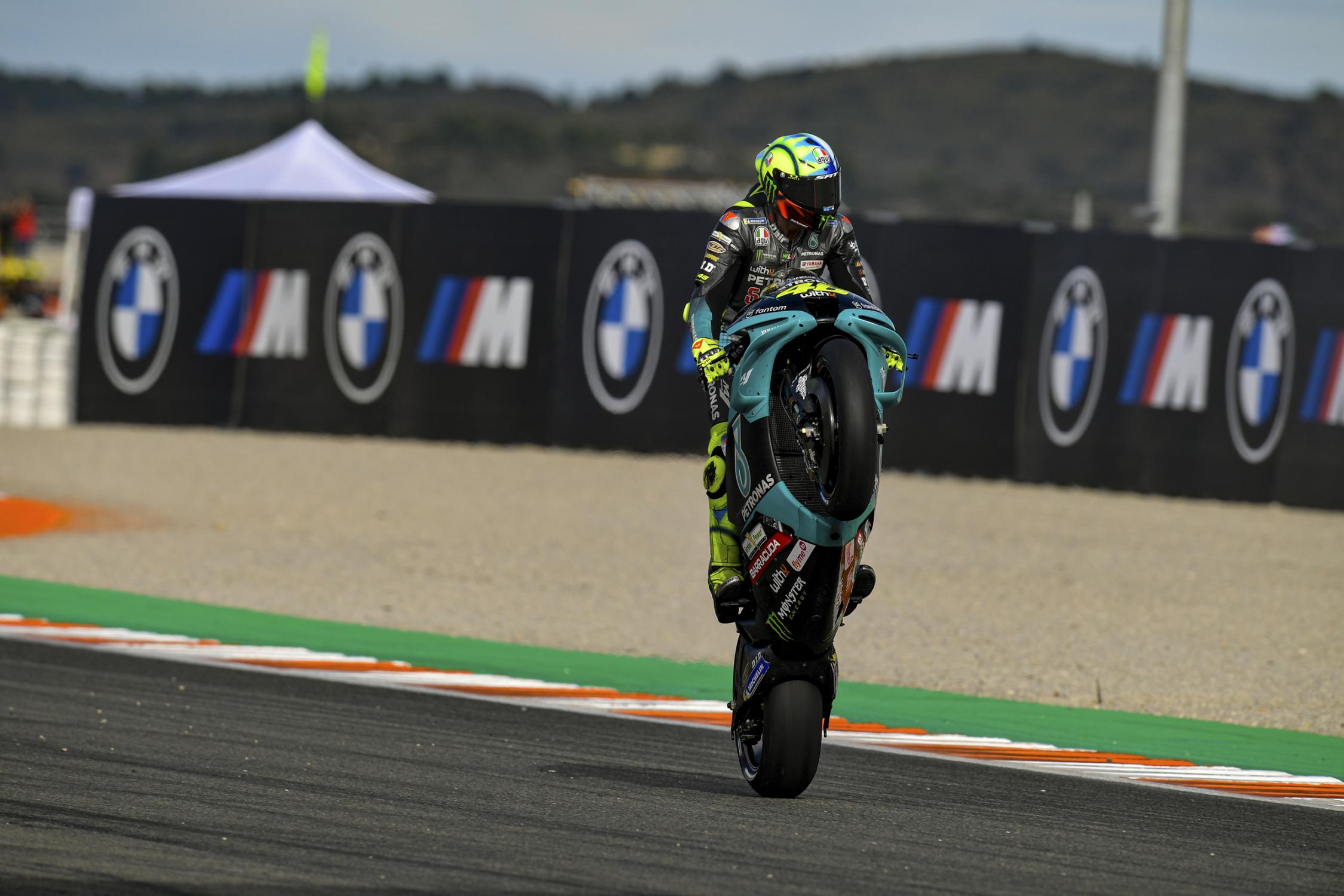 Valentino Rossi brought his MotoGP career to a close this weekend with an emotional weekend at the Circuit Ricardo Tormo for the Gran Premio de la Comunitat Valenciana. The Doctor ended his illustrious career with a strong top-ten finish.

After 26-years of Grand Prix racing, 42-year-old Valentino Rossi made his 432nd and final MotoGP start this weekend as he brought his impressive career to a close finishing where he started – 10th.

Already a legend,  Rossi has been inducted into the MotoGP Hall of Fame and is now an official MotoGP Legend!

The emotional lap of honor after the race and hero’s welcome were only the start on Sunday, and those came after a weekend already painted yellow in the number 46’s honor. Dorna CEO Carmelo Ezpeleta presented Rossi with the MotoGP Legend award on the stage, celebrating 26 seasons of history made and hearts captured around the world. Nine World Championships, 115 wins and 235 podiums across all classes are incredible numbers, but the legend is even more than those.

“I always think of this day like a nightmare because it’s the end of the a long career and I thought it would be in Valencia but in the end I enjoyed it a lot, so I have to thank everyone, everyone who has worked with me, the whole paddock, the other riders… it was an unforgettable day and I enjoyed it. It was a long career, and always a pleasure.”

Some of the best pictures from his iconic career below courtesy of MotoGP.

A podium at the Czech GP delivered the 125 cc World Championship for Rossi, as his P3 finish meant he couldn’t be caught and handed him the first of his nine world titles.

The Doctor took his first 250cc World Championship victory two years later with Aprilia in Rio de Janeiro, in the penultimate round of the 1999 season. Race winner ahead of Tohru Ukawa and Loris Capirossi, the ’46’ did his lap of honour with his guardian angel sitting behind him.

The magical Australian circuit was the scene of Rossi’s first premier class title triumph, winning a hard-fought 500cc race over compatriot and rival Max Biaggi, beating him on a breathtaking last lap by just 13 thousandths of a second. An unbeatable way to savour his first World Championship title in the premier class.

The 2005 Malaysian Grand Prix was the scene of yet another victory for Rossi, his fifth in a row in the premier class and his second with Yamaha. It was the seventh World Championship crown for the Doctor, who once again surprised everyone by staging an iconic celebration in the company of Snow White and the seven dwarfs. A very on the nose way of letting the public know it was title number seven.

Rossi’s visit to the Mugello International Circuit always had a surprise in store for his fans, whether it was on or off the track. His special edition helmets for the Italian GP are well known, such as the one he used in 2008.

Laguna Seca 2008: King of the Corkscrew

The 2008 US Grand Prix will always be remembered by motorcycling fans for providing one of the most illustrious passages of the sport’s modern era with the Doctor’s famous manoeuvre at the famous Laguna Seca Corkscrew, where the Italian overtook Casey Stoner en route to an important victory that would mark a major turning point in the title chase that season.

After a two year wait, having lost his Championship crown to the much-missed Nicky Hayden (2006) and Casey Stoner (2007), Rossi reclaimed the world title in 2008 with a win at the Japanese GP ahead of the Australian rider. His triumph was accompanied by another trademark celebration, with the ’46’ apologising for the delay and putting on another ‘show’ in the presence of a notary named Ottavio Ottaviani.

Argentina 2015: Myths are the name of the game

After winning the first round of the year in Qatar and taking the podium in Austin, Rossi returned to the podium in the third GP of 2015 at Termas de Rio Hondo, winning with authority ahead of Andrea Dovizioso and Cal Crutchlow. In full support of the Argentinean fans, Rossi returned the affection by paying tribute to Diego Maradona by wearing his jersey.

San Marino 2014: A crowd-pleaser at Misano

After returning to MotoGP™ victory at Assen 2013 following a two-year drought with Ducati, Rossi tasted victory again in 2014 at Misano, much to the delight of the Italian fans.

Assen 2017: Conquest of the Cathedral