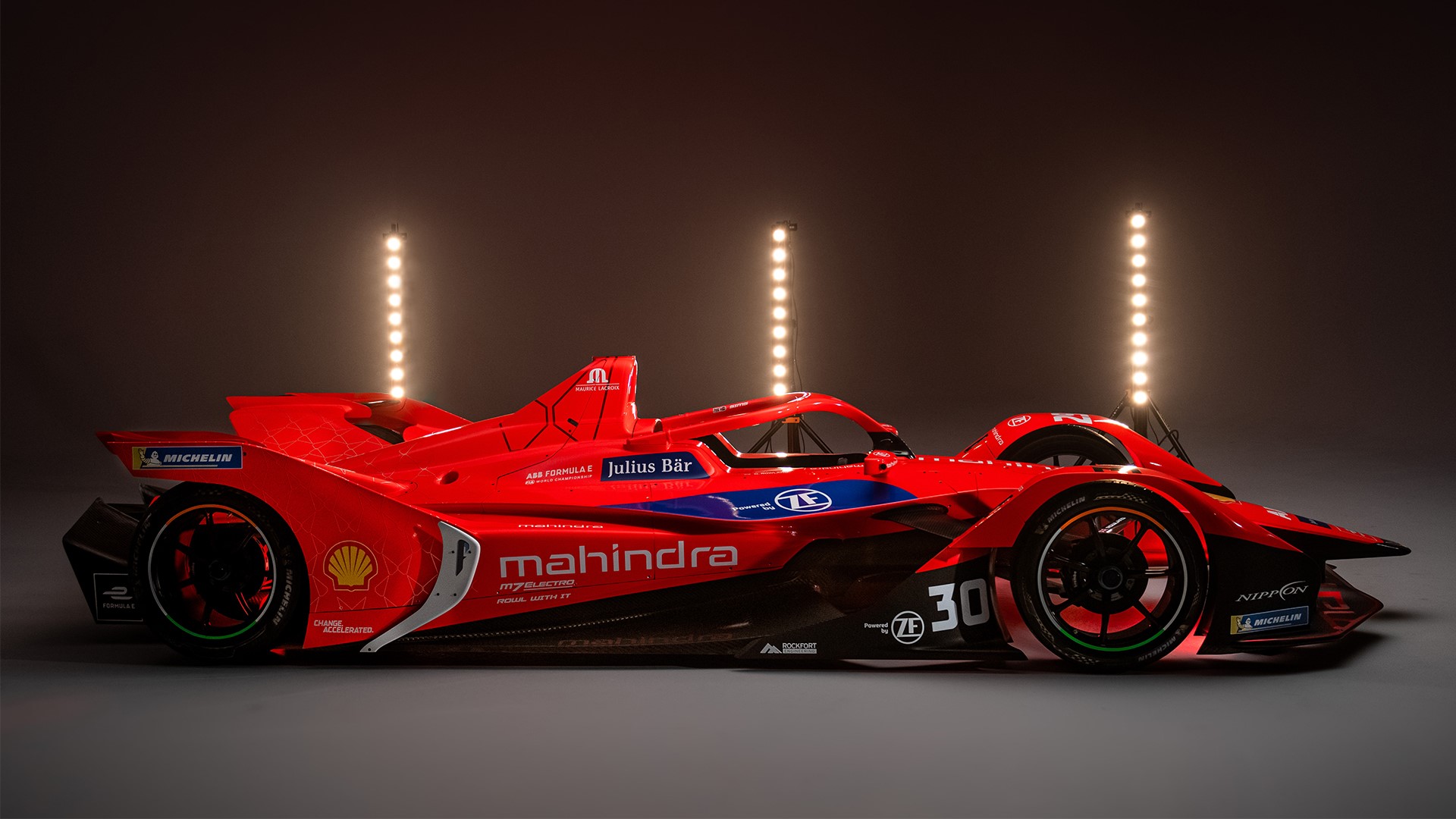 Revealing the new Mahindra wordmark and logo for the Born EV cars portfolio for the first time as it is globally unveiled, Kharga said, “The new dynamic Mahindra wordmark reflects the sleeker, more tech-focused Mahindra of today. The new Born EV logo is electric-in-motion, it feels like a force of red and silver energy passed by in high-speed. It reflects our focus and commitment to the electric revolution. By sporting the new identity, the race team has become the first of Mahindra companies to have its assets adorned with the new brand identity elements.”

Mahindra’s design division, Mahindra Advanced Design Europe (M.A.D.E.) has been instrumental in creating the ‘Born EV’ platform. Mahindra Racing, competing at the pinnacle of global electric racing, is helping accelerate Mahindra’s global EV vision by bringing knowledge and technology from the sport to road vehicles in its ‘Race to Road’ technology program.

Continuing to lead the way as Champions of Sustainability, Mahindra Racing is also proud to announce yet another accolade to its roll call of achievements. Following a successful audit process, the team has received official ISO 14001:2015 certification. ISO 14001 is an internationally agreed standard that sets out the requirements for an Environmental Management System (EMS). It helps organizations improve their environmental performance through more efficient use of resources and reduction of waste, gaining a competitive advantage and the trust of stakeholders.

The M7Electro will take on its final year of racing before the Gen3 cars replace the current Gen2 from Season 9 onwards. This season will see the continuation of competition of the car powered by the ZF powertrain and utilizing the dedicated e-Transmission fluid developed by Shell for optimized on-track performance. These key technical partnerships that debuted during Season 7 saw the team achieve 1 race victory, 4 podiums, 9 Super Pole appearances, 1 Pole Position and 2 Group Qualifying Poles.

Season 8 sees a new phase of the team’s partnership with Shell, as it extends and strengthens its relationship with Mahindra Racing on a multi-year basis. The team is also pleased to announce an extension of its partnership with luxury Swiss watchmaker Maurice Lacroix, which continues as Official Timekeeper.

Nick Heidfeld steps away from his previous position as Official Test and Reserve Driver but retains his role as Special Advisor to Mahindra Racing. Jordan King continues for a second year as Development Driver.

Alexander Sims, entering his second year as a Mahindra Racing driver, will compete in the #29 M7Electro, which fans have voted to be named as ‘Rath’ (which means Chariot in Hindi). Alongside him in the #30 will be Oliver Rowland, who joins Mahindra Racing from Nissan e.dams, having achieved 1 victory and 5 podiums in his Formula E career to date. Fans have voted his car to be called ‘Rowl With It’ in this season.

Mahindra Racing will be in action alongside the other teams at the official pre-season test from 29 November to 2 December 2021 at the Circuit Ricardo Tormo in Valencia, Spain. Season 8 of the ABB FIA Formula E World Championship will start on 28 January 2022 with a double-header in Diriyah, Saudi Arabia and is due to be the longest season in Formula E history, comprising 16 races.