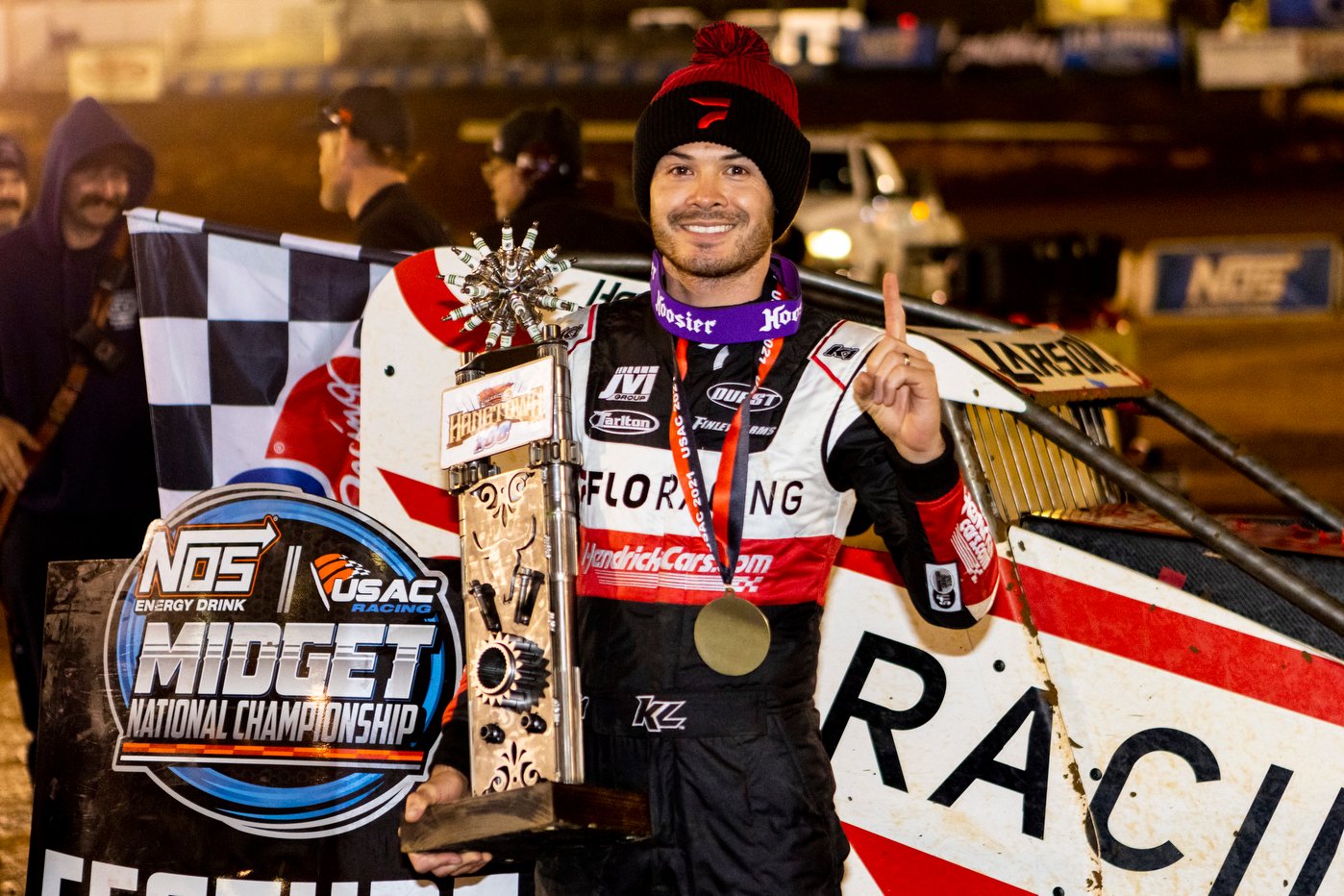 It was only a matter of time before America’s best race car driver of this era, Kyle Larson, found his way back to USAC NOS Energy Drink Midget National Championship victory lane at California’s Placerville Speedway.

Following the 2019 Hangtown 100 winner’s sixth-place finish in Thursday’s opener, the Elk Grove, Calif. native reacclimated himself to the track of his youth, where he honed his racing skills as a young phenom more than a decade earlier.

He put those attributes on full display during Friday’s second event of the three-night Elk Grove Ford Hangtown 100, starting seventh in the field for the 30-lap feature before rising his way up to the front, making the winning move nine laps from the finish with a dive under Emerson Axsom in turn four to score his second victory of the series’ season in just three starts.

The triumph elevated Larson to the top of the overall Hangtown 100 points standings as well, which the accumulation of will ultimately set the lineups for Saturday night’s $20,000-to-win, 100-lap main event.

Seemingly any car Larson steps into, it’s instantly a top-flite favorite to succeed.  The combination of the 2021 NASCAR Cup Series champion behind the wheel and his Kyle Larson Racing owned, FloRacing and HendrickCars.com sponsored Silva chassis with a Speedway engine required some ironing out on night one, but on night two, the combination had already proven itself as a winner.

“Thanks to everybody who took the time to build this car,” Larson praised.  “Nobody’s got a car like it in the field, so it’s neat to win out in our second race.”

Larson spoke of the ability to be confident enough in the car to drive it deeper into the corner than his competition, a characteristic that certainly aided in his rapid advancement throughout the second half of the race.

“I was finally able to carry speed on entry and have grip and be confident with it,” Larson explained.  “That helped me kind of stay low in the center of three and four and when I could hit it right in one and two and exit low.  My car got better and better throughout the race.  I didn’t want any cautions there at the end, but we were able to get good launches and kind of pull away a little bit.”

Larson’s outlook was in jeopardy early on, not by any of his doing, but because of Mother Nature.  A misty and rainy early afternoon delayed the program by well more than an hour, which resulted in a smothering and lingering fog which encompassed the 1/4-mile dirt oval during the preliminary events.

While a little digging was a must Larson could not avoid in his path to the front of the field from his inside row four starting position, USAC National Midget point leader Chris Windom was on a relatively easy street early in the going as he spurted out to a six-car-length lead from the outside of the front row.

However, lap three was the base of the first feature stoppage of the evening when Maria Cofer (10th) flipped in turn four.  Caden Sarale (17th) attempted to avoid the upside-down Cofer but made slight contact with her idle machine before also coming to a stop himself.  Both drivers restarted the event with Cofer 14th and Sarale 25th in what was his initial USAC feature start.

On the sixth lap, one of the most uncharacteristic events came via one of the most unlikely sources for such an incident.  Series point leader, defending champion and race leader Chris Windom got sideways all by his lonesome on entry to turn one.  As he tapped the brakes to righten the ship and avoid spinning all the way around, the car locked up, the engine shut off, and Windom was completely stopped.

Windom subsequently returned to the lineup to finish 15th while his point lead dwindled from 13 points up to 12 points down in an instant flash with just four races remaining.

The new race leader became series Rookie Bryant Wiedeman who led the field to the green on the lap six restart.  However, his lead proved to be short-lived as Axsom charged around the outside of Wiedeman two laps later in turn four to lead lap eight and take control of the top spot, where he’d remain for the bulk of the event.

By midway, Larson had moved his way into third, using a variety of attack angles, first up top above the cushion, then a slice toward the bottom, which he used to carve his way past Wiedeman for the second position on lap 17, slotting himself squarely between the now third-running Wiedeman and race leader Axsom.

Lap-after-lap-after-lap, Larson swung to the top side of turns one and two, then made a beeline from the top of turn two to the bottom of turn three where he slid side-by-side with Axsom repeatedly, rinse, lather and repeat.  However, time and time again, Axsom got enough of a drive in three and four to thwart Larson’s exhaustive pursuit, but Larson remained hungry and confident that his persistence would pay off in droves soon enough.

“It was difficult,” Larson acknowledged.  “The track was so fast there.  I got to third by a couple cars at the top of three and four.  The momentum of the yellows, and when they fell, kind of helped me out.  I found the line there in three and four right before one of the cautions and was able to really use that to my advantage with Emerson and Bryant running the top.  That worked out, and I was thankful that Emerson didn’t move down after I’d showed my nose so many times.”

On the 22nd lap, Larson’s constant hounding of Axsom paid dividends when he got the drive he so desired through turns three and four to slide up across and clear the chrome horn of Axsom at the exit of the fourth turn, all while the sizable crowd sent up a deafening roar of approval from under the covered grandstands.

The green-white-checkered finish presented a two-lap dash in which Larson went unheeded, unmatched and unbeatable as he reached the finish line first by a 0.663 second margin of victory over Axsom in second with Wiedeman third, Jason McDougal fourth and new point leader Buddy Kofoid in fifth.

Emerson Axsom’s fine California stretch has been buttery smooth thus far with the Franklin, Ind. driver earning his second runner-up finish in the past three races in the Golden State after leading a race-high 14 laps in his Petry Motorsports/FK Rod Ends – Iron Born Studio/Bullet by Spike/Speedway Toyota, a “T car” the team constructed following a major crash last weekend at Arizona Speedway.

“This is a backup car, and it took us a minute to get used to it, but I think we got it figured out after running second to Kyle.  It’s pretty cool, and I’m kind of out there fan-girling when the 1K goes by, but not really,” Axsom said, accompanied by a sizable grin.  “It’s pretty cool because it’s my dad and I working on this car.  We got our speed back and now we’ve got one more night.”

Bryant Wiedeman (Colby, Kan.) led the first two laps of his USAC National Midget career early in Friday’s feature and carried on to record the best finish of his young USAC career, a 3rd, behind Larson and Axsom in his Keith Kunz-Curb-Agajanian/Coleman Power Sports – Yerf Dog/Bullet By Spike/Speedway Toyota.

“It was definitely a good run for our team,” Wiedeman noted.  “I goofed up last night pretty bad on my part.  I had a chance at Bakersfield for a podium but made a couple mistakes there at the end.  I’m glad to be on the podium, especially with a couple of the best USAC Midget drivers there are.  I didn’t really know where to run early on and let Axsom by me, then Larson got me on the restart.  We’re just going to keep clicking off these nights and keep working towards that first win.”