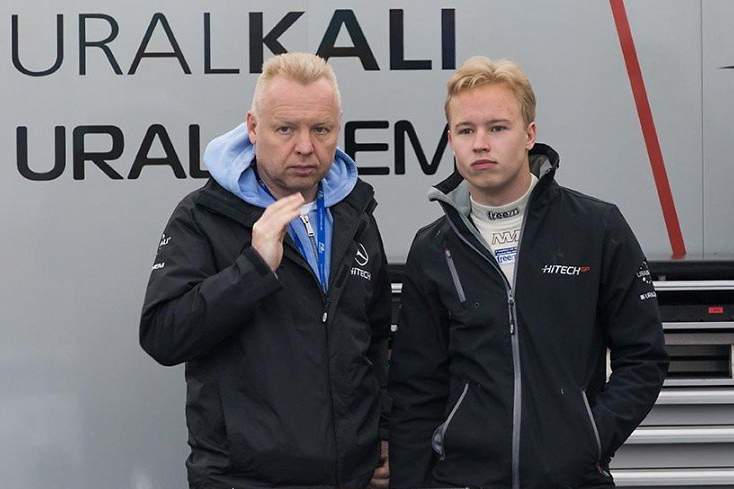 (GMM) Nikita Mazepin’s father says his company is “ready” to ramp up its backing of Haas – and he’s also not ruling out buying a Formula 1 team outright.

Dmitry Mazepin (shown above, left), who is listed in the top 100 wealthiest businessmen in Russia, is backing the small American outfit via his potash fertilizer company Uralkali.

“There is a fixed term and an extension option. I understand that many fans are interested in the cost, but it is a commercial secret, so I cannot reveal the numbers.”

That mystery number could now be set to rise, even though Haas’ 2021 season has been particularly disappointing.

“This season has turned out to be difficult,” Mazepin snr confirmed. “The car was slow.

“The team announced early this season that it would not be developed, but there were these two young drivers. And although they have almost no chance to fight for points, they both worked tirelessly,” he said, referring also to Mick Schumacher.

“I’m happy with their attitude, but I think for next season it is encouraging. First of all, there will be a new car,” said Mazepin.

Indeed, the car is even being developed at a new facility on the very grounds of Ferrari’s headquarters in Maranello – and now it appears as though there will be extra funding.

“We are ready to voluntarily offer additional conditions, with which we would like to motivate Haas employees to stay in the team and be more involved in the process,” said Mazepin.

“I understand that it is difficult to travel to 23 countries of the world in a season – the human factor plays a big role here. Therefore, we are doing our best to increase motivation internally and, as a sponsor, to be a part of the team.”

Dmitry Mazepin also reiterated that he still aims to one day soon call himself a Formula 1 team owner.

“We have great ambitions in motorsport,” he said, before alluding to his failed bid to take over the Force India team.

“Yes, there was an unsuccessful attempt to buy a team, but we will not leave this topic behind. And it isn’t about Nikita’s career,” added Mazepin.

“These are our long-term plans – we want to expand our presence in Formula 1. We are represented in Formula 4, Formula 3 and Formula 2, and ideally the crown should be a Formula 1 team and we want to be its owner.

“At the moment we are not negotiating with anyone because everyone is waiting for the cards to be revealed in 2022,” he said. “If some small teams suddenly become successful, then the cost and the attractiveness will be different.”