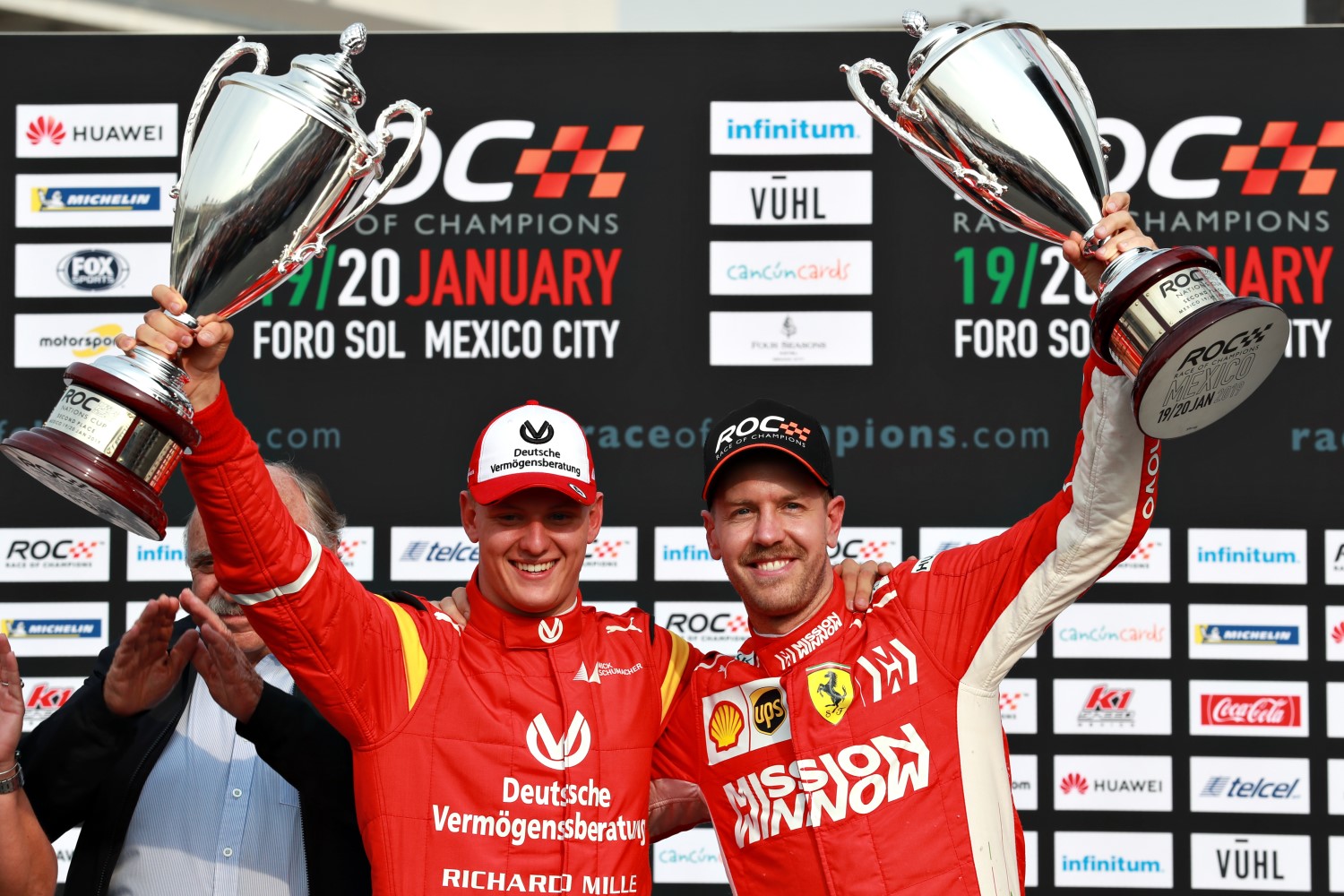 German Formula One drivers Sebastian Vettel and Mick Schumacher will join the growing roster of racing stars and legends at the upcoming ROC “Snow + Ice” WORLD FINAL in Pite Havsbad, Sweden. “I’m really looking forward to being back competing in the Race Of Champions again and to represent Germany together with Mick.” said four-time Formula One World Champion, Sebastian Vettel. “At ROC Mexico, we came 2nd in the ROC Nations Cup, so our aim is to do one better in Sweden.”

After 15 years in big stadiums, ROC Sweden promises to be a unique challenge for drivers from a range of racing disciplines. Not only will the course in Sweden be the fastest, widest course in ROC’s thirty-year history, but it will be held on the unpredictable surface of the frozen ocean and in a variety of race cars. “The competition will be very strong especially from the Nordic drivers who have a lot more experience than us driving on snow and ice,” Vettel continued.

ROC’s “Champion of Champions” individual racing was launched in 1988 and the ROC Nations Cup was introduced in 1999 as a team competition, becoming a fixture in every ROC WORLD FINAL since. Held on the first day of competition, the ROC Nations Cup has created some intense rivalries and enduring dynasties, including Team Germany’s record six-year dominance from 2007 through 2012.

“Representing Germany together with Sebastian will for sure be big fun, and obviously we aim to win a trophy again, said F2 and F3 Champion and current Haas Formula One driver, Mick Schumacher. “We have to continue the success of Team Germany, and fight for victory, and I am sure we both will take that very seriously! The other teams, especially the Nordic ones, may have more ice-driving experience, but we will try to make up for that with our motivation and resilience over the days of the event. Either way, I so very much look forward to meeting all the other drivers and spending time with them during the Race Of Champions weekend. The snow and ice promises to make this ROC event extremely special, and I am more than sure the drivers will have a crazy good time together in Sweden.”

The upcoming ROC event is the latest innovation from the race promoters who have for decades brought together novel experiences for the stars of motorsport and their fans. “ROC must provide something special in the equipment and in the racing environment, for these premier drivers to venture all the way to the Arctic,” said ROC President, Fredrik Johnsson. “I think this event in Sweden has everyone’s curiosity, including Mick and Sebastian, who both asked a lot of questions when we met at the Mexican F1 Grand Prix. Sebastian is one of the most successful drivers in ROC history and Mick made a big impression on everyone in his debut at ROC Mexico. It will be very interesting to see how they adapt to the new ROC Snow + Ice track!”

A unique winner-takes-all format that gives competitors the opportunity to test their talents against competitors they would never typically encounter, ROC draws many of the most successful racers from every discipline of global motorsports. The event is renowned for attracting superstars from all of the premier leagues in global motorsports including Formula One, Le Mans, NASCAR, IndyCar, World Rally and Rallycross.

s part of the ROC’s most recent innovations, the equipment featured at the 2022 event in Sweden will be powered by many electric and 100% fossil-free biofuel engines. Cars announced to date include the over 1000 horsepower strong FC1-X, that accelerates from 0-100 km/h in less than 1,5 seconds, the FIA RX2e—another electric rallycross car generating 250kW (335bhp) of power and up to 510 Nm torque—and the new Porsche 718 Cayman GT4 Clubsport.

The RX2e accelerates from 0-100km/h in less than 3.3 seconds, while the GT4 makes 425 bhp from fossil-free biofuel. The SuperCar Lites will return to ROC, but this time powered by biofuel. “It’s very nice to see the many new sustainability initiatives that the Race Of Champions are implementing, as they aim to become a Climate positive event over the coming years,” Vettel continued.

Current drivers announced for the 2022 event:

Additional drivers will be announced in the coming weeks and leading up to the event. A limited release of general admission tickets for the 2022 ROC “Snow + Ice” WORLD FINAL is available at Tickster. Event organizers will comply with any COVID restrictions in effect. Organizers and local officials will be providing updates with regard to any additional ticket sales and any restrictions affecting travel and local services due to COVID.