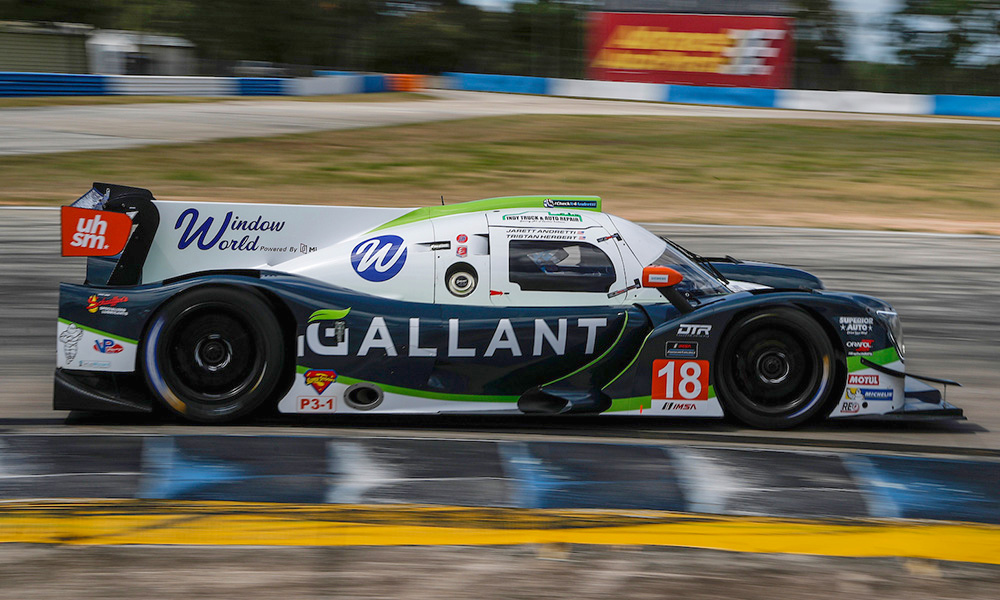 Even as the team announced plans to continue competing in the Le Mans Prototype 3 (LMP3) class in 2022, Andretti Autosport is still pursuing a manufacturer to participate in the IMSA WeatherTech SportsCar Championship’s planned LMDh category, team CEO and chairman Michael Andretti said Monday.

“We definitely want to do it,” Andretti said during an interview for Online Racing Industry Week presented by epartrade.com and racer.com. “Obviously, it wouldn’t be a (2023) program. It would be a ’24 program. We’re very interested in it, and hopefully, we can put something together soon.”

In the meantime, Andretti Autosport announced Tuesday that Jarett Andretti and Josh Burdon will be the 2022 full-season drivers of the No. 36 Gallant-sponsored Ligier JS P320 in the LMP3 class. Gabby Chaves and Rasmus Lindh will join them for the season opener, the Rolex 24 At Daytona.

LMDh will replace Daytona Prototype international (DPi) as the series’ top division in 2023. Five manufacturers and four teams have committed so far to the hybrid-based class. The series’ specifications are in line with Federation Internationale de l’Automobile (FIA) specs, allowing competitors to race LMDh cars in other series and events in addition to the WeatherTech Championship, including the 24 Hours of Le Mans.

“They did a great job working together with the FIA in Europe to come up with a package that you’ll be able to go and run Le Mans,” Michael Andretti said. “I think that was very important that we have equal rules for that.”

The structure of the LMDh program is attractive to his team’s future, Andretti said.

“I think they did a great job,” he said. “It’s very cost-effective for a manufacturer to come in now, where before it was a ‘he who has the most money is going to win’ type of thing. Now it’s going to be limited as to what they can spend and do. I think it’s going to make for a better series. There’s going to be a lot of interest.”

Andretti Autosport debuted the LMP3 program earlier this year in the IMSA Prototype Challenge, then moved to the WeatherTech Championship at mid-season. Jarett Andretti finished eighth in the final LMP3 standings.

The LMP3 program was a promise Michael Andretti made to his cousin John Andretti, who died of cancer in January 2020. Jarett Andretti, John’s son, is in charge of the operation.

“I’m there to support him,” Michael Andretti said. “I promised John I would support Jarett in whatever he was going to do. Also, it’s been good for us to learn for when we do get into the series in a bigger way. It’s been a good learning experience from that standpoint.

“Basically, it is Jarett’s program. He gets 100 percent credit for what’s being done there. We’re trying to support it as much as we can, but it’s his baby.”

Jarett Andretti’s best finish in 2021 was fourth place in the IMSA WeatherTech 240 at Watkins Glen International in July. Burdon joined the team for the season finale, the Motul Petit Le Mans, where they retired early and finished 10th in class.

“I’m looking forward to the experience,” Jarett Andretti said. “I think we have a great driver lineup and the team is ready. This is a historic competition and we are all excited to be a part of it.”

Chaves is the 2020 IMSA Michelin Pilot Challenge co-champion in the Touring Car (TCR) class. He has 10 career WeatherTech Championship starts, all in prototypes including in an LMP3 in this year’s Rolex 24. Lindh finished fifth in the LMP3 standings this season with a pair of second-place finishes driving for Performance Tech Motorsports.

A familiar face returns for next season and two familiar names join the Andretti Autosport LMP3 team at the Rolex 24 at Daytona on January 28-29, 2022.

Additionally, Andretti Autosport also announced that returning co-driver of the No. 36, Australian Josh Burdon, is on board for the full 2022 IMSA WeatherTech Sportscar Championship season alongside Andretti.  Said Burdon, “I am excited to continue racing with Andretti Autosport alongside Jarett for the 2022 IMSA season. I am motivated by the strength of our program and our sole focus is to fight for the championship win.”

Swedish born Lindh, the 2021 12 Hours of Sebring LMP3 polesitter,  joins the team for the Rolex 24 Hours at Daytona with fresh optimism, stating “I am really looking forward to run with Andretti for the 24 Hours of Daytona and I cannot wait for the race to start.”

2014 Indy Lights Champion Chaves echoes his teammates excitement, adding “I cannot say how excited I am to be joining Andretti Autosport for the Rolex 24 Hours at Daytona! I have been following their LMP3 progress in IMSA closely this year and truly believe they have what it takes to win at Daytona. When I began speaking with Jarett and the team, I immediately jumped at the opportunity to be part of it. They have put together an amazing driver, engineering, and mechanic lineup to come out swinging in 2022.”

With his first season of IMSA Sportscar Championship racing under his belt, third-generation driver and co-founder of Andretti Motorsports, Jarett Andretti, is looking forward to the intense level of endurance competition that the Rolex 24 at Daytona brings “I’m looking forward to the experience.  I think we have a great driver line up and the team is ready.  This is a historic competition and we are all excited to be a part of it,” said Andretti.

The Andretti Autosport LMP3 team will begin the 2022 season of competition with qualification for the Rolex 24 Hours of Daytona  at the IMSA Roar Before Daytona 24 January 22-23. Qualifying at the Roar will be broadcast live on NBC Sports Gold Trackpass.