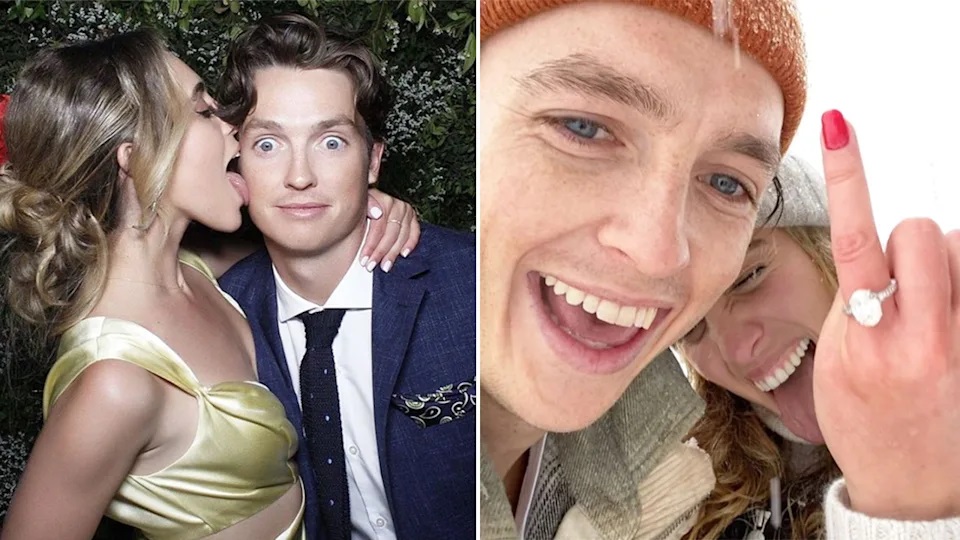 James – who was Australia’s flag bearer at the 2018 Winter Olympics – posted the exciting news on social media this week.

The 27-year-old got down on one knee in the snow in Switzerland, where he popped the question to Stroll.

The couple – who celebrated their two-year anniversary in April – both took to social media to share their incredible development with the world.

“Hey, we’re getting married … everyone this is my fiancée,” James said in a video posted to his Instagram.

“This is my fiancé,” Stroll screamed in delight in the video.

Stroll – the sister of F1 driver Lance – captioned her own Instagram post: “Forever” accompanied by a ring emoji, along with a photo of the moment James proposed in the snow.

The Canadian heiress’ father Lawrence is the executive chairman of Aston Martin’s F1 team, and is estimated to be worth around A$4.2 billion.

Chloe revealed that it was her F1 driver brother Lance that originally set her up with James, before their relationship kicked off at a party in New York.

“Lance actually called me and said, ‘I think I just found the guy you’re going to marry’,” she told the Herald Sun.

“It was kind of strange. I had a conference in Park City (Utah), which was where his next competition was the same weekend and a lot of random things happened.

“Scotty was very cute. We dated for about four months, or as he likes to say, we got to know each other, before he officially asked me to be his girlfriend.”

James recalled of their first meeting: “I just connected with her in New York and went out to dinner with her at a place called Motel Morris in Chelsea and the rest is history.”

The Aussie says Chloe’s passion for music is one of the things he admires about her.

“She’s quite a talented musician.

“It’s been really cool watching her do her thing. She’s always had a huge passion for music and it’s the industry she wants to be a part of. She’s really enjoying it.” Yahoo Sports