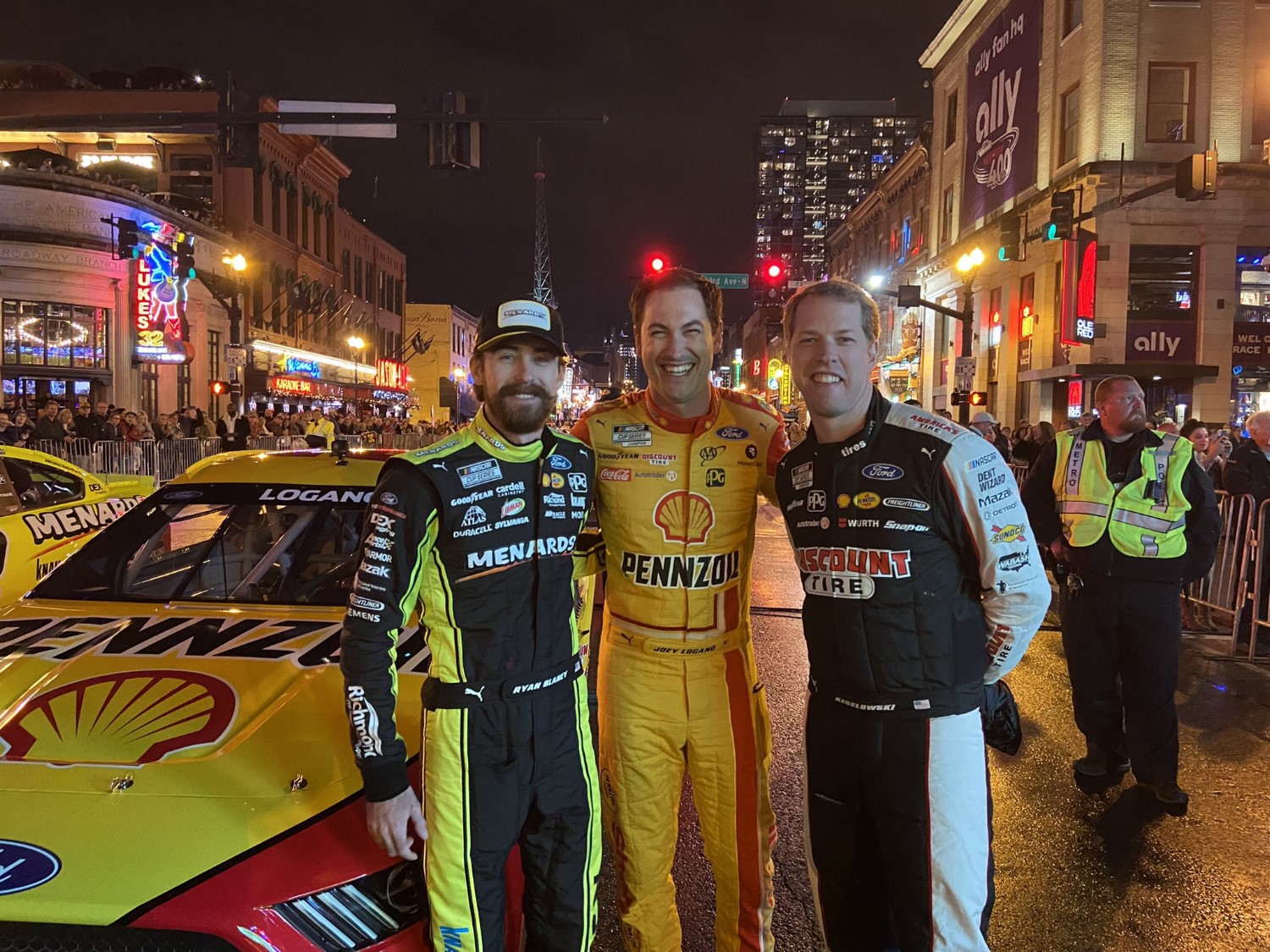 NASCAR saw IndyCar’s success in Nashville this past summer and said we can’t let that continue.

NASCAR is so keen on taking the Nashville market from IndyCar they added a Cup race at both the Nashville Speedway and now the Nashville Fairgrounds, Two Cup races will suck the majority of the IndyCar ticket money out of the market.

If Nashville didn’t know NASCAR was in town this week for the Champions Award banquet, the city found out emphatically on Wednesday night, when the world’s best stock car drivers lit up Broadway in the heart of the Music City’s nightclub district.

Some of them lit up Broadway, that is.

How about that @Team_Penske trio burnout tonight on Broadway! What a cool way to team up one final time together and put on a show for all the @NASCAR fans in Nashville! @keselowski | @Blaney | #ChampionsWeek | #NASCARAwards pic.twitter.com/95ieKUumzm

On a night when veteran 40-somethings ruled the Burnouts on Broadway, Kevin Harvick took down the rest of the competition, destroying the rear tires in his No. 4 Stewart-Haas Racing Ford and winning in a walk off—leaving his disabled Mustang in the center of the street.

“Everybody tries to overcomplicate everything,” Harvick said afterward. “I drove right to the dry area (after an earlier rain had dampened the asphalt). My hope was that we could blow the tires off down to the wheels, shoot sparks and walk off.

“We did everything but the sparks… My whole purpose was to make up for a year without winning.”

Harvick took over the top spot from fellow veteran Kurt Busch, who, like Harvick, had a secret weapon under his hood—one that produced copious smoke as Busch put the No. 1 Chevrolet through its paces.

“Given that Ganassi’s (Chip Ganassi Racing) shutting down, that was our backup car from Phoenix with a bona fide race engine in it.”

Most other drivers had tamer power plants, but that didn’t prevent them from breaking transmissions.

“Hendrick Motorsports really let me down,” Bowman said, clearly tongue-in-cheek. “I broke it way too early, as soon as I dumped the clutch.”

The crowd that packed the restraining barriers five-deep along Broadway got a back flip from Hemric and a salute from Gibbs as he stood on his driver’s-side window ledge. Denny Hamlin bounced off a jersey barrier and kept going, turning in a creditable performance.

NASCAR Cup champion Kyle Larson closed the show with an extended run as his father—in the passenger seat—held the steering wheel aloft out the window as Larson deftly guided the car.

“That was a lot of fun,” Larson said. “I hope the fans enjoyed it. I know I did. I’m like shaking. That was more nerve-wracking trying not to embarrass ourselves right there than we do for a whole race.

Last but not least … your 2021 #NASCAR Cup Series champion, @KyleLarsonRacin. 🔥🔥🔥

“I enjoyed having my dad riding passenger with me, and we got to explode some tires, so that was cool.”

Kyle Larson describes giving his dad the steering wheel during the burnouts so he could hold it out the window. pic.twitter.com/I3YW8fAqEA

But it wasn’t enough for show hosts Kyle Petty and Rutledge Wood, who administered an arbitrary scoring system that gave the nod to Harvick.

When the three Team Penske drivers—Joey Logano, Brad Keselowski and Ryan Blaney—did their burnouts together, putting the noses of their cars together in a triangle and generating a thick cloud of smoke, they received a score of nine—three points each.

Harvick, on the other hand, got a 10 from Petty and a nine from Wood, finally picking up his first victory of 2021.

Trackhouse found and owner Justin Marks and Co-owner ‘Pitbull’ met with the media at Nashville Superspeedway Saturday and touched on a variety of topics including NASCAR charters [Trackhouse is leasing a charter from Spire Motorsports this season] and Marks’ interest in moving the team to Nashville:

Before the Burnouts on Broadway, Trackhouse Racing, co-owned by Justin Marks and rapper Pitbull, unveiled a new paint scheme for its No. 99 Next Gen race car, to be driven by Daniel Suarez.

The occasion? An announcement that Trackhouse Entertainment Group and several Nashville hospitality icons will work together during the 2022 NASCAR Cup Series season.

Specifically, Tootsie’s World-Famous Orchid Lounge will serve as Suarez’s primary sponsor for six races, including the season-opening Daytona 500 in February. The paint scheme also will appear on the car at both Bristol races, both Talladega events and the June date at Nashville Superspeedway.

Though the team’s race shop will remain in North Carolina, Trackhouse already has strong ties to Nashville, and the sponsorship—which will include the “Visit Nashville” logo, Opry Entertainment’s “Ole Red” brand and the Nashville Convention and Visitor’s Corp. on the car—only serves to strengthen them.

“It was very important to come here to Nashville,” Suarez said after the unveiling outside Tootsie’s. “The team, in a way, is based here… Our race team is based in Charlotte, but the team was born here.