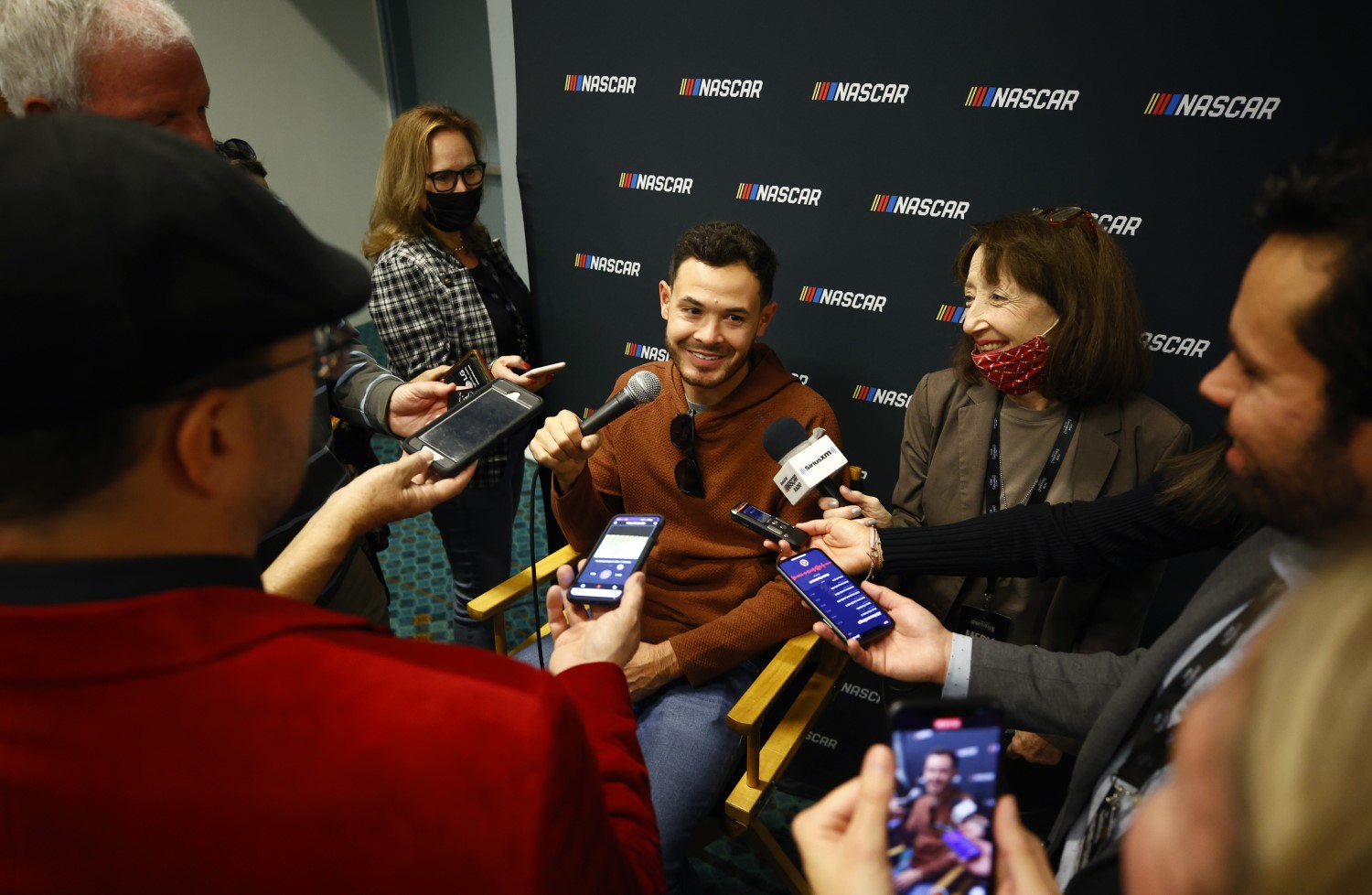 But these aren’t normal times. Securing the series championship on Nov. 7 at Phoenix Raceway caused a substantive shift in Larson’s perspective.

“It’s been cool to enjoy all the championship stuff, all the interviews, pictures, everything—all the stuff that you wouldn’t normally have fun with, I’ve been enjoying doing it this time,” Larson said on Thursday at the Music City Center during an interview session with reporters before the NASCAR Awards.

“Being a champion, I went into this, and I want to enjoy every interview, every picture, every moment that I have.”

As to recognition from the general public, Larson still maintains a relatively low profile. Out in his native California last week for the Turkey Night Grand Prix USAC midget race, Larson made a side trip to Disneyland.

“I don’t know if any more people recognize me, now that I’m a champion,” Larson said. “I went to Disneyland and only had a handful of people recognized me, which was cool. Going to race the dirt stuff out West, there were a lot more people hanging around the pit area and taking pictures than normal.

“And all that stuff can get overwhelming at times, but again, it’s really cool. I want to just enjoy all of that.”

Before the race in Ventura, Larson’s hometown of Elk Grove gave its favorite son a parade worthy of a champion on Nov. 22.

“That was awesome, getting to go home, getting to go to Elk Grove and having that parade for me,” Larson said. “I wasn’t sure how many people were going to turn out. I was hoping it was going to be a lot, but you just don’t know, and I didn’t want it to be embarrassingly small either.

“The turnout surprised the heck out of me. It was way bigger than I thought it would be. So that was really awesome. I got to see a lot of familiar sprint car fans and some aunts and cousins and stuff I haven’t seen for a little while. It was awesome to get there.”

It was a packed year for Joe Gibbs Racing driver Denny Hamlin, who fielded his own team 23XI Racing team, and nearly claimed his first NASCAR Cup Series championship.

Hamlin won a pair of races and posted career-best marks in top-five (19) and top-10 (25) finishes and took eventual NASCAR Cup Series champion Kyle Larson to the wire in challenging for the regular season championship. He won two Playoff races – at Darlington, S.C. and Las Vegas – and came a pit stop away from nearly pulling off his first NASCAR Cup Series title.

And in the immediate weeks following the season finale, his 23XI Racing team officially expanded by a car and will add veteran, former NASCAR Cup Series champion Kurt Busch to the fold for 2022.

“My passion for work is still really, really high and I knew that I wanted to run a business,” said Hamlin. “I didn’t know what that business would be, it turns out its team ownership. And hopefully I make the right decisions in the long-term to make that all work out.

“I had to compartmentalize my time. I had to make sure that I designated certain days for certain aspects of my life.”

“I’m planned, I’m programmed, that’s the way I work,” Hamlin added, insisting about his time behind the wheel, “I feel as good as I’ve ever felt about the driving aspect of my career.

“If you had asked me three years ago, I’d have been like, ‘uggh, how much longer do I want to do this?’ And now I have no horizon, I don’t know. As long as I stay competitive like I’ve been doing, I don’t know. I’ll race until I’m Mark Martin, I guess.”

Asked about the year, Harvick reminded reporters Thursday he finished in the exact same championship position in 2021 – fifth place – when he went winless that he did in 2020 when he won nine races.

Upon reflection, Harvick said, “I think our guys did a good job. Obviously we’d love to have won but we did a great job in managing the season. I don’t know what it says with how we currently exist with our current system.

He added with a smile, “We won nine times last year and finishing fifth and we won nothing this year and finished fifth. I don’t really know how to take that, personally.”

Harvick extended his run of 20 or more top-10 finishes to nine years. He’s had at least 10 top-five finishes for the past eight years. And while the driver of the No. 4 Stewart-Haas Racing Ford was eliminated following the second round of the Playoffs, he did score a pair of top-10 finishes, including in the Playoff race at Bristol, Tenn. He closed out the year with top 10s in three of the final four races.

“I thought there were two or three [races] that we were in position to win and for one reason or another, running out of laps or following a road block, whatever the scenario was [didn’t get them]. I thought Phoenix, the last race of the year we didn’t do a good job on pit road and to give ourselves a chance but I thought we had one of, or even the best car just needed to finish off track position.

“I think as you look at the season and look at the result, most people would say, ‘How did that happen?’ and that’s just a huge credit to the guys for giving us something manageable at the end of the year.”

The overwhelming consensus among NASCAR Cup Series drivers is that the new Next Gen race car, which will debut in 2022, is one of the most radical changes in the history of NASCAR’s premier division.

McDowell comes from a sportscar background, and there are aspects of the Next Gen car that give him both a sense of comfort and a reason for optimism. The driver’s seat, for example, is shifted more toward the center of the car—and more akin to its location in a sportscar.

“You try not to be arrogant, cocky, boastful, but I’m just like, ‘That’s a proper race car with a proper foot box and a proper seat positioning. It took me forever to get comfortable in our (Gen 6) cars, but when I jumped into that (the Next Gen car), I felt right at home.

“A lot of guys have talked about the steering being too fast and twitchy and all that, but when you turn the wheel, the car’s supposed to turn, and it’s doing that. You don’t have huge sidewall deflection and laziness and all that we had in our old car. It feels like a proper race car to me.”

Alex Bowman likes the trophies, but he’s searching for consistency, too

Despite career-best four victories and a trip to the NASCAR Cup Series Playoff, Alex Bowman characterized his 2021 season as a mixed bag.

“Last year (2020), we ended the season really consistent, finished sixth in points, had a really great Playoff run, and nobody really cared,” Bowman said. “It was cool to finish sixth in points, but we only won one race.

“This year, we won four races, we won a race in the middle of the Playoffs, but we finished bad in points—14th—but we still won four races. So, looking back at it, I’d rather have the four trophies, but it would be nice to be able to figure out the consistency side of it.”

That’s something Bowman and crew chief Greg Ives have struggled to accomplish.

“I think, as a team, Greg and myself and everybody on our team has been asking ourselves that for four years now,” said Bowman, who plans to follow teammate Kyle Larson’s lead and run approximately 30 sprint car races in 2022.

“We’ve got to figure it out, and we’ve got some work to do to make it happen. There’s a lot changing next year, and hopefully that benefits us.”

Speaking of the trophies, Bowman’s grandfather clock from Martinsville just arrived this week.

“But the clock’s also real cool. I stuck it in my office, kind of in the corner. It’s neat to have. It’s a process to set it up. I didn’t expect that, but I got that done and it’s pretty cool.”

The idea to coordinate the championship week celebration was actually Logano’s wife and the three drivers said Thursday morning, with smiles, that they decided to alter the regular plan on the fly, in tribute to Keselowski who won the 2012 NASCAR Cup Series championship for Penske – the first NASCAR Cup Series title for the esteemed team.

Logano smiled and joked about the discussion among the teammates during the driver’s safety meeting for the famed “Burnout” sessions, implying it would be easier to ask for forgiveness than permission.

“Joey wanted to do something unique and cool with all three cars and we were trying to find something fun and he brainstormed and we executed, so it was fine.” Keselowski said with a grin.

“That’s a screenshot in my mind. It was cool and I’m glad we got to do that,” said Keselowski, who moves from the Penske operation to an ownership position with the newly-named Roush Fenway Keselowski Racing (RFK Racing) team for the 2022 season.

The streaming partnership means that more than 280 NASCAR Roots races will streamed live and on-demand under the popular TrackPass package. NASCAR Senior Vice President for Media and Productions, Brian Herbst, said the series had been contemplating and working on this partnership for years.

“We are trying to provide a service for our fans to see more racing,” Herbst said during Thursday’s announcement.

“Our partnership with FloSports is a win for motorsports fans at all levels and doubles down on NASCAR’s commitment to grassroots racing – the foundation of our sport,” he said in the official news’ release of the announcement.