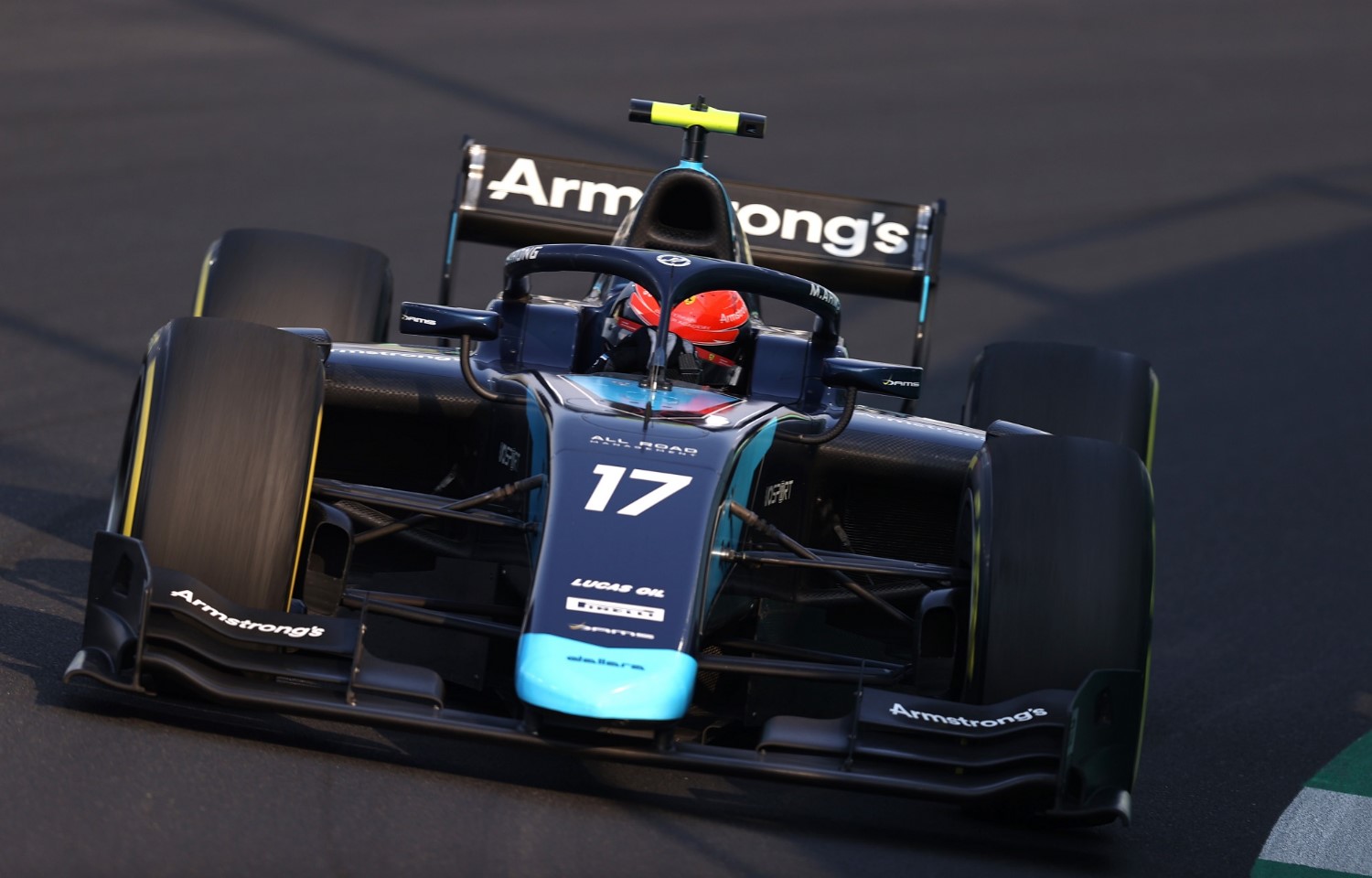 Since starting his F2 career off with two podiums in the opening two rounds of 2020, the 2019 Formula 3 vice-champion has only taken one more top-three finish, with a switch to DAMS failing to re-ignite his fortunes, but the Kiwi looked rejuvenated in Saudi Arabia as a lightning getaway saw him pass reverse polesitter Lawson on Lap 1.

The Kiwi duo ended the race in first and second, with Lawson followed by his Hitech teammate Vips in third. Felipe Drugovich finished fourth ahead of Carlin’s Jehan Daruvala, who enjoyed a superb afternoon, climbing an impressive six spots for P5.

Lining up on track for the first time in two months, Lawson and Armstrong were at the front of the reverse grid and went wheel-to-wheel heading into a tight first turn.

Starting on the inside from second, Armstrong had the advantage at the corner and put his front wing ahead of Lawson, who was shoveled narrowly wide. The Hitech racer attempted to fight back but it was already advantage Armstrong, and the DAMS was able to clear his rival by the exit of Turn 3.

The Ferrari junior was handed some breathing space by the Safety Car following a Turn 4 collision that ended Guilherme Samaia and Marino Sato’s races. The Charouz Racing System driver had been tagged by Olli Caldwell, who was swiftly handed a 10s-time penalty for causing the collision.

The Safety Car headed back into the pits at the end of Lap 3, but there was further drama as Championship challenger Zhou found himself facing the wrong way and at the back of the field, which brought out a Virtual Safety Car. The UNI-Virtuosi racer had attempted a daring dive on Lundgaard at the first chicane, but the space wasn’t there, and he was sent spinning, suffering damage to his front wing as a result.

During the chaos, Ralph Boschung had pulled a move on Vips and nabbed the final podium position, with Drugovich gaining fifth from Zhou. Meanwhile, Théo Pourchaire and Shwartzman had both jumped Lundgaard for sixth and seventh.

The early stoppages weren’t putting the field off further maneuvers as Vips recovered P3 from Boschung. The riskier move, though, came from Shwartzman, who sprung an overtake on Pourchaire for sixth. The duo cut it close, and the ART Grand Prix driver wobbled, which lost him another place to Lundgaard.

Boschung lost speed and started to tumble, falling to eighth within a matter of corners. Piastri appeared in his rear-view mirror after taking ninth from Daruvala and the Championship leader didn’t hang about, nabbing the spot from the sluggish Campos racer, who continued to plummet out of the top 10.

Pourchaire was the next retirement, losing control at Turn 22 and thumping the wall, which brought out a second full Safety Car. The frustrated Frenchman clambered out of his ART as the field cooled off from a frenetic few laps.

Three laps remained when the Safety Car headed back in and Armstrong managed to hold his nerve at the restart, with the top 10 all retaining their places. Daruvala stole the show in the final few laps, finding the smallest of gaps between Piastri and Lundgaard to sneak into sixth with a stunning maneuver.

Armstrong, Lawson and Vips hung onto the podium positions at the checkered flag, ahead of Drugovich. Daruvala made up another position at the death, passing Shwartzman for fifth to complete an incredible sixth overtake of the day and cap off a stunning performance. Lundgaard took seventh ahead of Ticktum, who squeezed ahead of Piastri shortly before the finish line.

“Finally, back in the press conference room. It is good to be back and to have a first-place trophy. It was a bit of a tough last lap, Liam (Lawson) didn’t give up, so that was cool. I am not sure if that was televised, but my engineer was certainly nervous.

“I am very happy to finally get that trophy and to reward the boys in blue. Saying that, I have to get ready for my next race because it’s in around four hours, so let’s enjoy that.”

Despite finishing out of the points, Piastri and Zhou retain first and second in the Drivers’ Championship, with 182 and 142 points, but Shwartzman is now just one behind the UNI-Virtuosi driver in third. Ticktum is fourth with 130 points and Pourchaire fifth with 130.

PREMA are top of the Teams’ title battle with 323 points, ahead of Carlin on 232 and UNI-Virtuosi on 209. Hitech Grand Prix are fourth with 204 points and ART Grand Prix are fifth with 165.

Bent Viscaal’s reward for making up four places will be a spot at the front of the reverse grid for Sprint Race 2, with the Trident driver set to start in first ahead of Piastri. Action will get underway at 9.40pm local time.