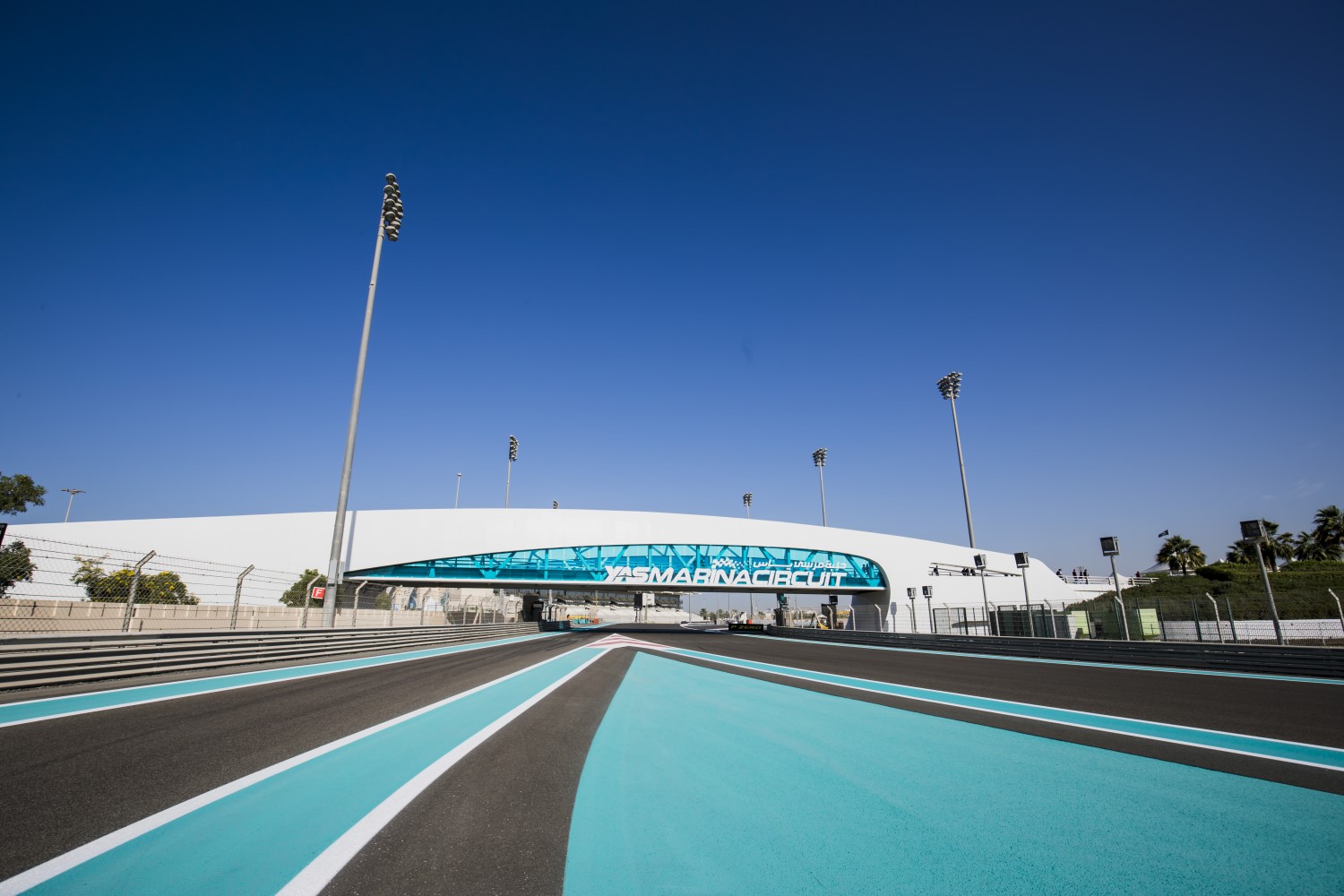 The F1 teams are ready to go racing a final time in 2021 with the Abu Dhabi Grand Prix set to bring down the curtain on the 22-round Formula 1 season.

Abu Dhabi joined Formula 1’s calendar in 2009 at the purpose-built Yas Marina Circuit, becoming the championship’s first day-night event, courtesy of the facility being equipped with 5,000 lights. Yas Marina will play host to Formula 1’s season finale for the eighth successive season, and 10th time overall, with only Australia’s Adelaide having held the championship’s curtain-closer on more occasions.

It will be the final race for the current specification cars, ahead of an overhaul of the regulations, while Formula 1 also waves goodbye to 13-inch tires, with 18-inch versions set to come in for 2022.

But for 2021’s swansong, there are still some new factors to explore. For the first time since its debut in 2009 Yas Marina’s layout has been amended in a bid to facilitate better racing while providing more of a challenge for teams and drivers.

The track, designed by Hermann Tilke, is dominated by a 0.62mile-long straight between turns five and six, forming one of the longest acceleration stretches on the Formula One calendar, which means this is where Lewis Hamilton’s ‘rocket’ Mercedes will win the race.

Some other corners, most notably in the final sector of the lap around the iconic honeycombed W Hotel, have been reprofiled and resurfaced in order to create a faster and more flowing track. That is set to lower lap times by around 10 seconds, with the circuit now consisting of 16 turns, while a new race distance has been set at 58 laps.

F1 will start its final Grand Prix in the late afternoon Abu Dhabi sunshine, before the race heads into twilight conditions and the flag falls on the 2021 season beneath the circuit’s floodlights.

It’s a short run into Turn One before the circuit changes kick in and create a more flowing first sector. 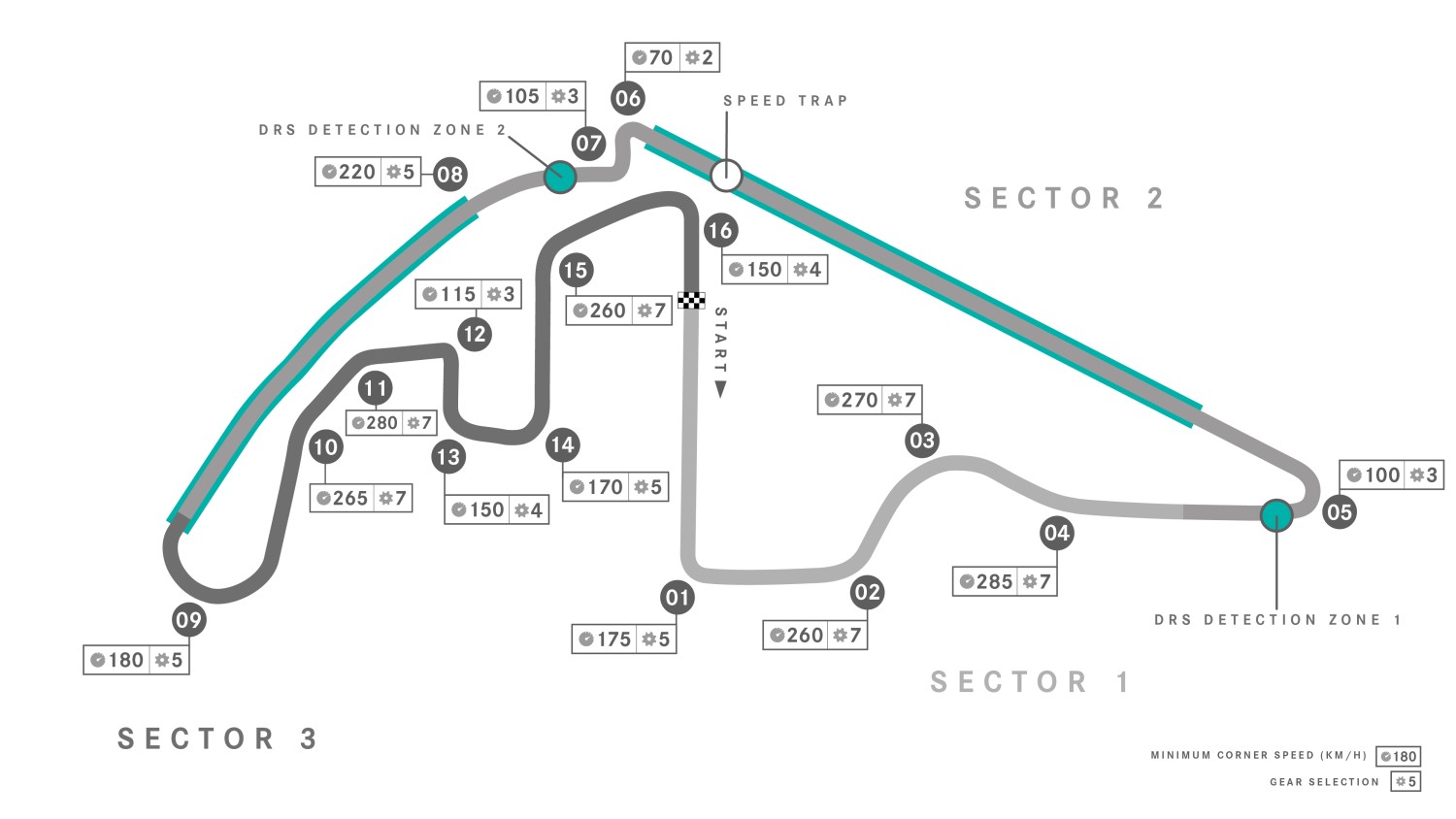 Drivers hit their first ‘new’ section at what was once Turn Seven, with the dog-leg chicane now eliminated and the ensuing hairpin widened to boost overtaking.

Instead of the slow, technical chicane, drivers will arrive at the new Turn Five at speeds approaching 300km/h (186mph), braking heavily for the wider-apex left-hander.

There’s the usual DRS-boosted long straight into the Turns Six and Seven chicane before drivers pick up significant speed through the kink of Turn Eight and another straight, again with DRS support.

The old Turns 11 through 14 are now gone, replaced by a long, banked left-hander (Turn Nine), evoking memories of Zandvoort earlier this year, again to boost overtaking. Simulations have suggested cars could take this at 240km/h (149mph).

The technical hotel section remains, but several corners have been reprofiled, opening the radii to create a faster and more flowing section for drivers to grapple with at the end of the lap.

Last year’s Abu Dhabi GP was a successful one for you last year, do you think we have good chances heading into the race this weekend?
First of all I’m excited to be back in Abu Dhabi! Last year is not always a good reference in terms of result, as there were multiple factors that contributed to it. We’ve been lacking a bit of pace for the past few races, but hopefully that won’t be the case this weekend.

Can you talk us through the changes to the circuit and how you think it might impact our performance?
The Yas Marina Circuit has had a few changes and the track is much faster now. It’s going to be interesting to see how it will affect the setup of the car. It’s very important to have a good qualifying in Abu Dhabi, so hopefully we can make that happen.

How do you feel heading into the last race of the season? It has been an epic battle so far.
We’ve had a lot of wins and good moments this year, and we’ve been a lot more competitive in general, compared to the years before. So as a Team, we can be very pleased and proud of what we have achieved this season. We are level on points and I know that we as a Team are going to give it all to win this Championship. This is going to be an exciting race, and we want to finish the season in the best way possible.

The final event of the 2021 season sees us return to Abu Dhabi. The Yas Marina Circuit has become the traditional season finale, and this year will host one of the most exciting climaxes to the season that we have seen in sometime. The circuit layout has been modified considerably since last year, with fewer corners and a more flowing beginning and end to the double straight section. Combined with changes to the penultimate corner, the circuit is now significantly quicker, and the ease of overtaking may also be improved. The modified areas inevitably have a newer and smoother surface, which will have a small effect on tire behavior.

We know much of the circuit well, and we are keen to explore the new corner complexes and to understand how they change the demands on the drivers and the car setup.

Pirelli have brought their softest compound this week, which they have done for the last few years here. The performance will be a bit tricky in the warmer conditions of FP1, but by the evening, they will be working well.

We head to Abu Dhabi for the final race of the season and what is sure to be a weekend full of mixed emotions as my journey with Williams comes to an end. It has been an incredible three years with the team, with many highs but also some lows, but I am determined to go out in the best possible fashion and help the team secure eighth place in the Constructors’ Championship. It would be a fitting reward for all the hard work and efforts from everyone at Grove over the past few years as we’ve battled back from our difficulties when I first joined the team. I am sure there will be plenty of feelings and emotions after the Grand Prix on Sunday, but until then, my full focus is on the track and putting together a strong weekend.

I always enjoy racing at Yas Marina and have happy memories from winning the FIA Formula 2 title there in 2018. I’m also looking forward to tackling the revised layout, which, I think, will help to create an improved spectacle, and hopefully be beneficial to our car’s performance across the event.

Alfa Romeo says goodbye to both its drivers

Alfa Romeo Racing ORLEN heads to the final race of the 2021 season, the Abu Dhabi Grand Prix, to mark the end of an era for the team and the sport. Ahead of the big regulation revolution of 2022, Alfa Romeo Racing ORLEN will honor and celebrate its two drivers, Antonio Giovinazzi and Kimi Räikkönen, as they compete in their final race of the season, with the Finn bringing an impressive two-decade career to a conclusion.

Every story has an end, and the final chapter of the 2021 season will take place under the lights of the Yas Marina circuit. The team says goodbye to its line-up of Räikkönen and Giovinazzi, a driver pairing that flew the team’s colors for three years and has written some important pages of our history: we say goodbye, and we say thank you for three years together, three years of hard work, happy moments, difficult challenges and learning. Three years of growing together, as a team.

The Abu Dhabi Grand Prix weekend will be one for looking back at these times, celebrating the career of a legend of the sport such as Kimi and the contribution of Antonio to the growth of our squad. There will be many moments to raise a toast, moments to savor, old friends to embrace; there will be emotions on and off the track as we create new memories to see our drivers off into the Abu Dhabi night. We will soon shift our full focus to next year, the new cars, the new tires, a new everything: but this weekend, one last time, we’ll go out with our team and fight for the result we deserve.

Frédéric Vasseur, Team Principal of Alfa Romeo Racing ORLEN: “The final race of the season is always a special moment, even more so this year when we head into some drastic changes, both within and without the team. We will obviously want to celebrate and honor Kimi and Antonio and their contribution to our team and the sport, but we also need to focus on the race weekend: there’s a job to finish, and we need to be fully committed to it until the final lap of the race, giving everything we have for a good result. Finishing with a strong performance would be a huge boost for the whole team as we head into the winter.”

Kimi Räikkönen (Car #7): “It’s the last race of the season and, this time, the last race of my career, but I don’t think too much about it. Of course, I know it will feel different once I cross the finish line and I know this chapter of my life is closed, but once I am in the cockpit, it will be a race like any other. I want to finish this experience with a good result, for myself and for the team, and I also want to enjoy this weekend with my family and my friends, who will be with me to say goodbye to Formula One.”

Antonio Giovinazzi (Car #99): “I approach Abu Dhabi full of confidence after such a good race in Jeddah. I wanted a result like that before the end of the season to show what I can do, to show that I have not given up and that I will keep on fighting until the final checkered flag; now I want another strong race to finish my three years with the team well. I owe it to all those who believe in me and keep supporting me and I owe it to myself, to finish the season with the result I know I can deliver. It will be an interesting weekend, and I’m ready for it.”