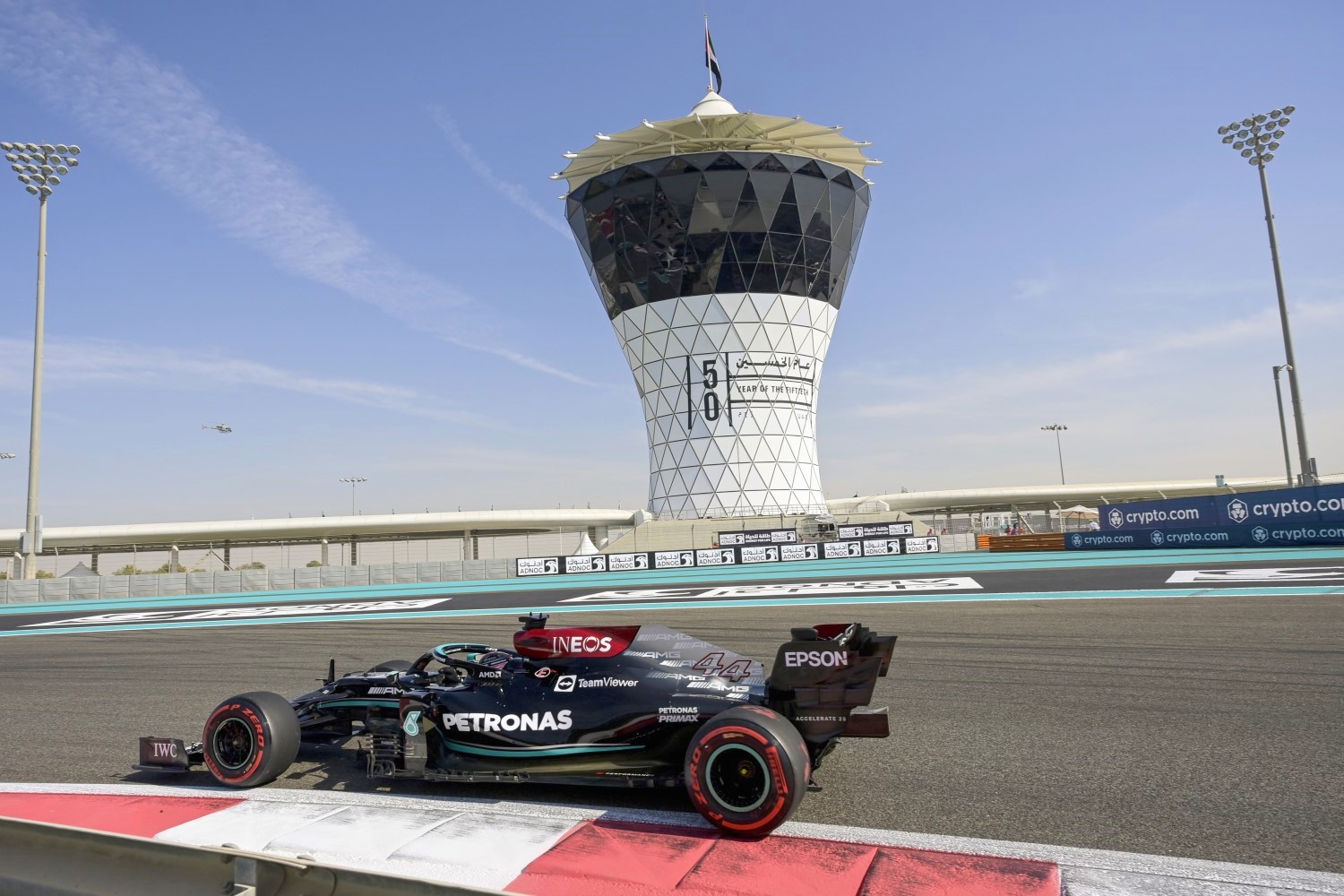 Mercedes began to turn up the power on Lewis Hamilton’s ‘trick rocket’ engine in practice 2 for the Abu Dhabi and its clear, Max Verstappen has no chance to win the F1 title.

Still sandbagging, Hamilton put up a lap of 1m23.691s on his final qualifying simulation run in his #44 Mercedes to top the Alpine of Esteban Ocon by 0.343s.

Valtteri Bottas was 3rd quick in the #77 Mercedes, 0.392s behind his superior teammate.

The session ended early when Kimi Raikkonen crashed in Turn 14 in the #7 Alfa Romeo.  He was unhurt.

So, it seems under the lights in cooler temperatures that Mercedes might just have the edge on the Bulls. That being said, in FP2 last time out in Jeddah, Hamilton and Bottas were P1 and P2 – before Verstappen was the quickest in qualifying the following evening before he choked and crashed.

It’s just too tight to call.

Lewis Hamilton
It’s been a decent day, I like the changes they’ve made to the track – it’s made it free-flowing and more enjoyable. It’s obviously close between us all and a little unknown in terms of relative pace, but I’m sure it’s going to be super close, as it has been in the previous races. The car doesn’t feel too bad, it started off in a good place and then got a bit worse in FP1. In FP2, it was little better with some of the changes we made. Now we just need to crunch through the data and try to figure out how we can improve, the target is always moving. On my long run, I was trying to follow the car ahead, and it still wasn’t easy here, but it should be better than in the past. Overall, I feel good, I feel great in my body and we made some positive steps setup-wise, so we’ll try to perfect it tonight and come back hard tomorrow.

Valtteri Bottas
It was nice to get a feel of the modified layout, the track feels better than before with more flow and some increased overtaking opportunities. When I had a little moment on track, I went off-line where it’s very dusty and I was a little too wide on the curbs before that corner and paid for it in the next one – a nice drift!

We changed the car quite a bit from FP1 to FP2 and it felt like a step forward so I’m comfortable overall with the car, but none of the laps today were amazing so there should still be more to come. We had a decent long run with the Medium tire and the car was pretty consistent, you could feel the new faster corners stressing the rear axle a little more than before. We’ll do important work overnight and be ready for tomorrow.

Andrew Shovlin
It’s been an interesting day and we’ve covered quite a lot of ground as far as the setup work goes. In the morning we weren’t particularly happy with the single lap work, but the long run was well-balanced. In the afternoon, the single lap was coming quite easily but the long run wasn’t great and neither driver was particularly happy with the car. The challenge tonight is to understand the effect of the changes we’ve been making and to find the right compromise between the low and the high fuel running. We’re warming up the simulator in Brackley for a busy night of setup work, but we’ve got a good read on the issues today, so hopefully between the work here at the track, and the work back there, we can make some good progress overnight.

Max Verstappen
“I like the new track layout, it’s more fun to drive with the faster corners, especially in the last sector. We made a few changes to the set-up across the two sessions and I do think they are positive. We are still learning and understanding a few things. The short runs didn’t go to plan, we are lacking a bit of pace, but I think the long runs were more competitive, so that’s important. I’m looking forward to qualifying tomorrow to put it all together.”

Sergio Perez
“I don’t know how much the track has improved since last year. It’s still nice to drive, but there are question marks for me on whether it has improved the racing. I think we have some work to do overnight after today’s sessions. We ran very different set-ups across the two cars, so we’ve got plenty of information that we need to go through in detail and pick out the best parts for qualifying. There will be learnings to take forward into our final practice session, so we can look to qualify strongly on Saturday.”

Pierre Gasly (AT02-05, Car 10)
“The layout is really different, it feels like a new track with a lot more high-speed corners, so it’s really cool. We tried some different things with the car today, but I still haven’t felt that great, so we’ve got some work to do for tomorrow.”

Yuki Tsunoda (AT02-04, Car 22)
“I’ve already driven here for the Young Driver Test last year and of course knowing the track beforehand always helps with my approach to the weekend, which hasn’t always been the case this season. I’m really enjoying the new layout of this circuit, we’ve still got some things to work on but I think the pace so far is quite good. We’ve got a lot of data across the two cars, so we’re in a good position to continue to improve tomorrow. My aim is to get through to Q3 in Quali again, as we’re looking quite strong here and then our race pace is looking good also, so we just need to put it altogether when it counts.”

Jonathan Eddolls (AlphaTauri Chief Race Engineer)
“There have been a number of changes made to the circuit since 2020, so we spent the majority of FP1 understanding how these affect the circuit characterization, with fewer low-speed corners and now more medium speed left-handers. We were concerned that graining could be an issue with the softest tire choice, especially in FP2 with cooler track temperatures, but they held up better than expected, so we will need to see how that impacts Qualifying and the race. We tested some alternative setup directions across the two sessions with both cars and focused more on the long run pace. This meant our short run competitiveness wasn’t quite where we typically are for a Friday, but we expect to make an improvement tomorrow, once we have analyzed all of the data and put the optimum car setup together.”

Charles Leclerc #16
I quite like the new layout and it was fun to drive. The modifications seem to make it easier to follow the cars ahead, so it appears to be a positive track update. The track evolution was quite big over the course of the day, but that’s more down to the temperature as it becomes much cooler here in the evenings. This helps us to gain grip. Tyre degradation is quite high but I think our car is reacting well to this circuit so far. In terms of pace, we did a good job with the race simulation and still have a little work to do to prepare for qualifying. We are lacking a bit there compared to some of our closest competitors and I hope we can put it all together for tomorrow.

Carlos Sainz #55
It’s been a challenging day here in Abu Dhabi with the new track layout and surface, making it very different to any other year we’ve driven here in the past. It’s been a very difficult Friday because since FP1 I wasn’t feeling at home in the car and I’ve been chasing the balance the whole day. That’s quite unusual because we’ve been starting on the right foot pretty much every weekend and today, I feel we have a lot of homework to do, going into Saturday. We will now sit down with the engineers, see where we can improve the car and hopefully find more performance for tomorrow.

Sebastian Vettel
“It is a good challenge to have the new circuit layout, and it is faster and more exciting to drive. I think some of the weaker turns have been replaced with stronger corners – the highlight being the new banked Turn Nine. We are still learning the circuit, but it is a positive first impression. The goal now is to extract more from the car and finish qualifying for the year on a high tomorrow.”

Lance Stroll
“It was good to experience the new Yas Marina Circuit layout today. It is definitely faster and has more flow to it, which makes it cool and fun to drive. We were able to complete our program today and put in some good laps. We have learned a lot across the two sessions, so now it is about reviewing the data and trying to extract some more performance ahead of qualifying tomorrow.”