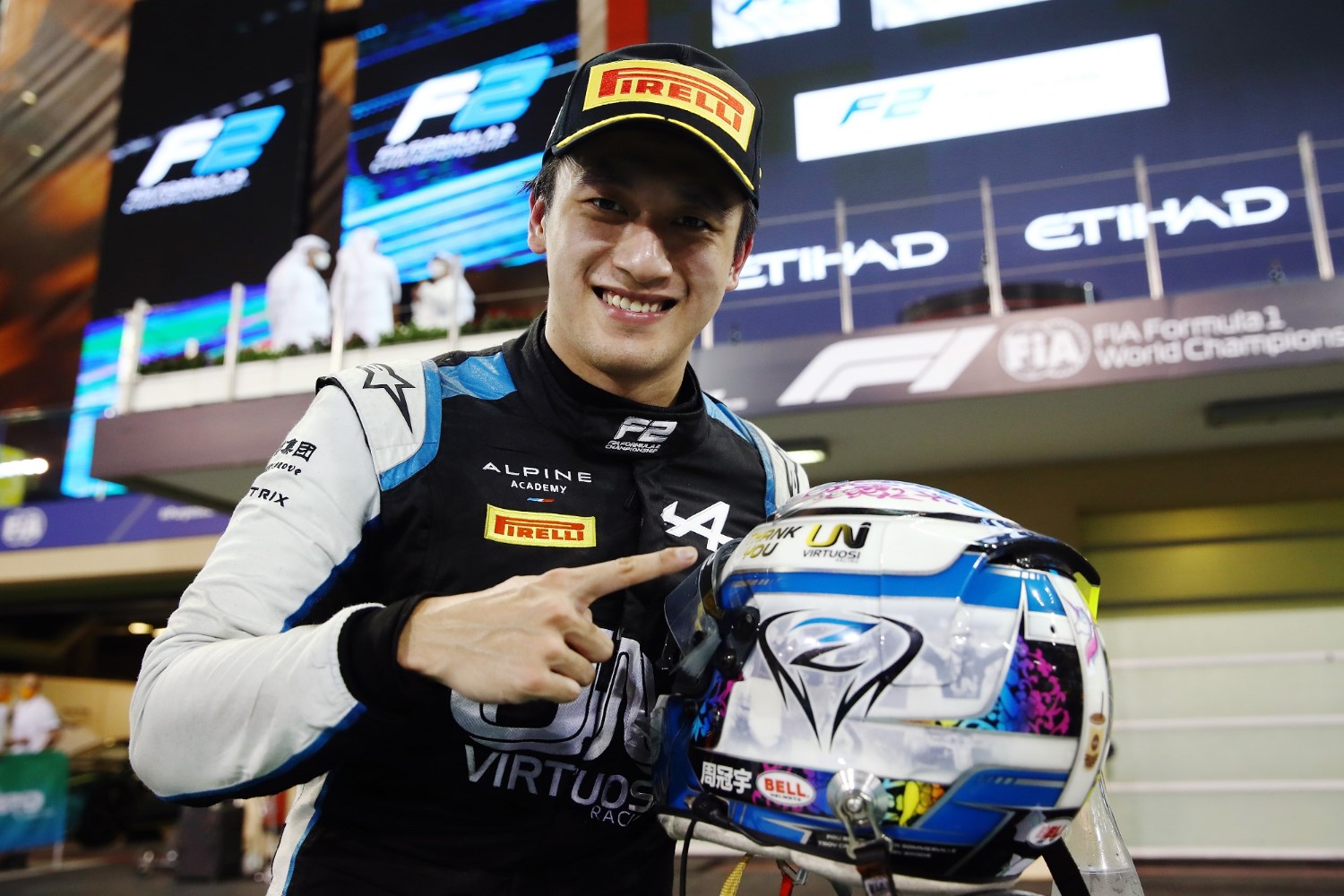 UNI-Virtuosi’s Guanyu Zhou returned to the top step of the podium for the first time since Silverstone in his penultimate Formula 2 race, beating PREMA Racing’s Robert Shwartzman and Campos Racing’s Ralph Boschung in a frenetic Sprint Race 2 at Yas Marina.

Zhou’s fourth win of the season strengthens his bid to finish in the top three of the Drivers’ Championship, with his closest rival Dan Ticktum in fourth.

On Saturday morning, Oscar Piastri had been crowned champion after finishing on the podium in the opening race at Abu Dhabi, but the Australian suffered a race to forget in the evening, getting served a five-second time penalty for an incident on the opening lap, before retiring from the race after a collision with Jüri Vips and Roy Nissany.

Felipe Drugovich took his second successive top-five finish, ahead of Liam Lawson in sixth and Jehan Daruvala in seventh. MP Motorsport rookie Jack Doohan claimed the final place in the points. Reverse polesitter Marcus Armstrong was unfortunate not to score his second win of the season after retiring from first with mechanical issues.

A frenetic race start played out under the lights in Yas Marina, but not for reverse polesitter Armstrong, who had dashed off into the distance and kept well clear of the trouble playing out behind him.

Boschung and Zhou held their positions as well, but everyone from Ticktum to Daruvala was involved in a mass brawl behind them. Piastri had launched his PREMA down the outside from P8 and was almost shoveled into the wall as those around him went four-wide.

Despite missing the wall, the Australian still came away with minor damage after banging wheels with Liam Lawson. The PREMA fell to 13th and the Hitech down to eighth as Piastri was found to be at fault and handed a five-second penalty.

The second PREMA of Shwartzman was involved as well, but he came out of it in fourth, three places up from where he’d lined up, while Ticktum retained his starting position of fifth. Daruvala had also gained places, jumping to sixth in front of Drugovich.

As the chaos subsided, the grid were given a chance to breathe by the Safety Car, which arrived following contact between Alessio Deledda and Olli Caldwell at Turn 9. Caldwell managed to soldier on, but the Italian was forced to retire his HWA RACELAB.

Racing resumed and Piastri’s charge back through the field began, the Champion gaining two spots in quick succession as he passed Roy Nissany and Jüri Vips in one fell swoop.

But Nissany and Vips both came back at him and the trio clipped wheels, which spun Piastri to a stop. Nissany managed to retain control of his DAMS, but Vips was sent wide and joined Piastri in clambering out of his car, resulting in a second Safety Car.

Zhou had skipped ahead of Boschung prior to the Safety Car and was promoted to first when the Aston Martin headed back into the pits, as Armstrong suffered a mechanical issue at the restart and pulled to a stop on the side of the road.

Only a Virtual Safety Car was required this time and Shwartzman jumped in front of Boschung when racing resumed, with Zhou holding onto first directly ahead of him.

After nearly losing his DAMS during the battle with Vips and Piastri, Nissany was hoping to steer clear of further trouble, but Doohan’s MP showed up in his rear-view mirror and forced the Israeli to get his elbows out once again.

After two successful attempts to keep Doohan behind, the Formula 3 vice-champion eventually got his way and launched ahead of the DAMS for the final points’ position.

Zhou managed to hold onto first at the flag, ahead of Shwartzman, while Boschung clinched his second podium in as many rounds. Ticktum and Drugovich completed the top five as Daruvala fell to seventh behind Lawson. Doohan completed the top eight and took the final point on offer.

“Victory in Sprint Race 2 is very important for me at the end of my F2 career. I have one more race left tomorrow and I want to thank the team, we made a huge improvement from the first race to the second.

“I am super happy with what we have achieved, it is a huge relief, and I am happy to be on the top step again.”