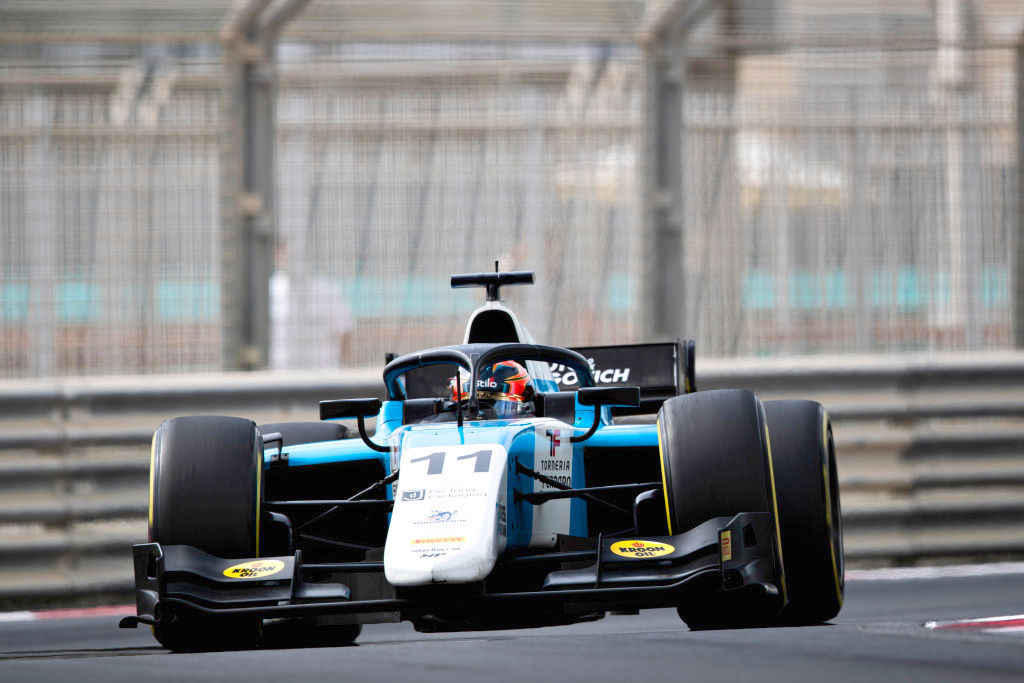 Jehan Daruvala finished as the fastest driver on Day 1 of post-season testing at the Yas Marina Circuit, beating MP Motorsport’s Felipe Drugovich and Virtuosi rookie Jack Doohan, with a time of 1:35.793.

The Red Bull junior was making his return to PREMA Racing, the team he challenged for the Formula 3 title with in 2019. Having finished second fastest to Drugovich in the morning session, Daruvala edged out the Brazilian in the afternoon by more than three tenths. F3 vice-champion Doohan finished third in both sessions to continue his impressive start to life in Formula 2.

On his return to MP Motorsport, after a season with Virtuosi, Drugovich set the benchmark during the opening 30 minutes, posting a 1:35.577. The Brazilian headed Daruvala on a cool morning in Yas Marina, with the Indian swapping Carlin for PREMA.

There were several Red Flags during the opening session, with Clément Novalak, Amaury Cordeel, Frederick Vesti and Théo Pourchaire all stopping on track at various points, as well as a coming together between Jüri Vips and Dennis Hauger.

Vips had briefly set the third fastest time, but fell to sixth following the collision, as Virtuosi’s Doohan jumped to third, ahead of Carlin’s Liam Lawson. Ralph Boschung completed the top five with Campos Racing, while also running the most laps of the morning, punching in a total of 47.

There were two stoppages in the early stages of the afternoon, with Cordeel and Vips both requiring red flags, but overall, a lot more running time for the field. Sixteen drivers broke the 40-lap barrier, six set more than 50, and Carlin duo Sargeant and Lawson posted more than a 120 between them.

Olli Caldwell was the early pacesetter for Campos with a 1:40.217, before getting replaced by the Daruvala at the top of the order. ART Grand Prix’s Frederik Vesti took the times below 1m 38s for the first time, before seeing Daruvala drop a 1:36.063 to return to P1.

Drugovich and Pourchaire briefly bumped the PREMA down to second, but Daruvala managed to find a further three tenths to return to the top of the leaderboard. Doohan muscled his way into third to finish as the quickest rookie for the second session in a row.

Pourchaire held on to fourth, ahead of Boschung. Calan Williams was the second-highest rookie, running just under a second off the pace for Trident in P6.

A late lap from Nissany put him in seventh, ahead of Juan Manuel Correa, who was making his F2 return with Charouz Racing System.

Vesti finished in eighth, despite stopping on track at the end of the session. He beat out 2021 F3 champion Dennis Hauger.

Testing will resume at 9am local time on Friday.