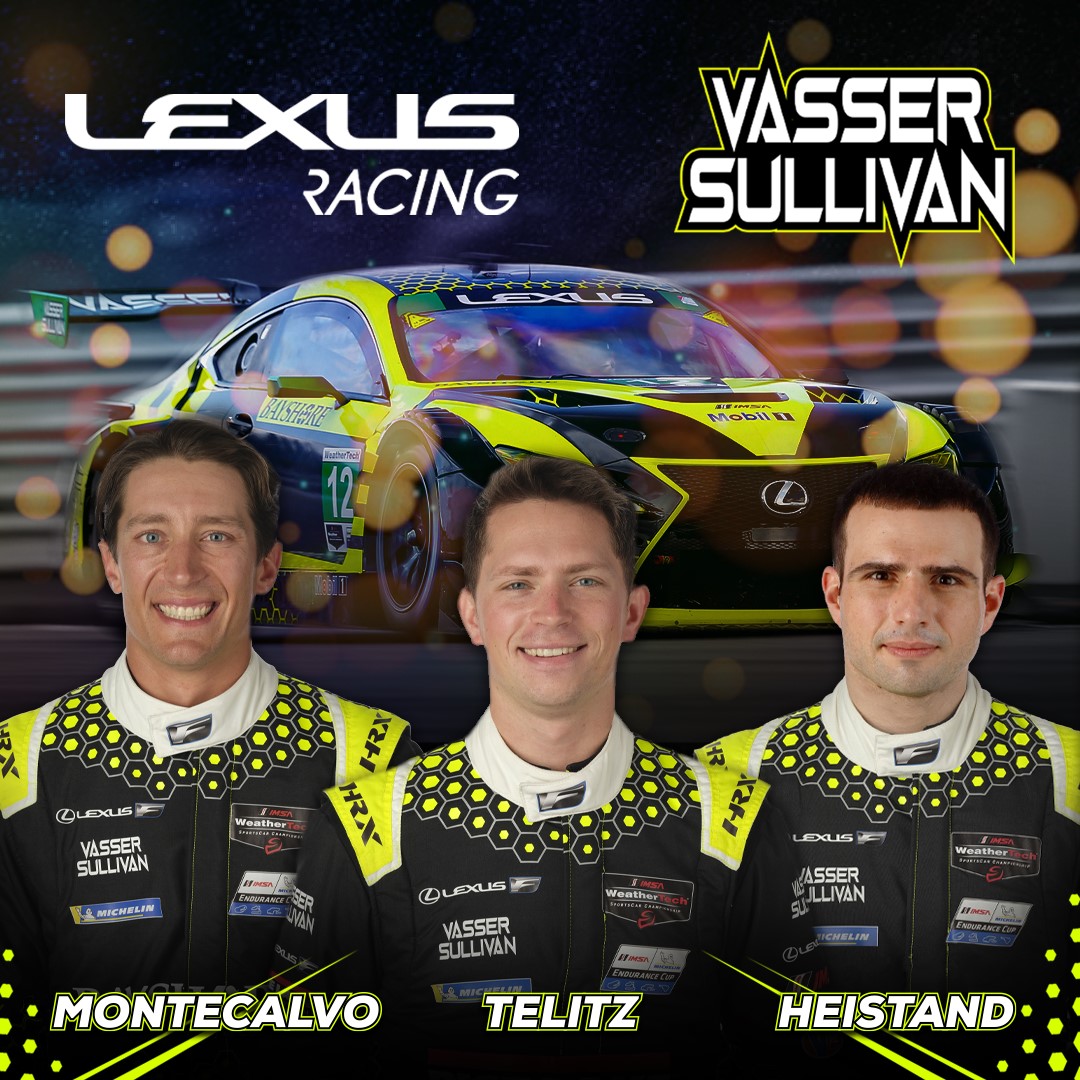 Telitz, a native of Wisconsin, will be competing in his fourth IMSA season for Vasser Sullivan. He ran the 2019 IMSA Michelin Endurance Cup, before becoming a full-time driver of the No. 14 Lexus entry in 2020 where he and Hawksworth scored three wins, five podiums and three pole positions. They won the GTD Sprint Cup driver and team championships enroute to Lexus clinching the Sprint Cup manufacturer championship. In 2021, Telitz again teamed with Hawksworth to finish seventh in the overall IMSA WeatherTech SportsCar GTD Drivers Championship on the strength of six top-five results, including one win in the sprint race at Watkins Glen International and three podiums (the win at the Glen, thirds at Lime Rock and VIR).

Montecalvo, from Highlands, New Jersey, will also be contesting his fourth season with Vasser Sullivan and Lexus in the IMSA GTD class. He had a breakout season in 2020, capturing his first IMSA win (Road America) and first IMSA poles (Grand Prix of Sebring and Grand Prix at Michelin Raceway Road Atlanta). In 2021, Montecalvo co-drove the No. 12 Vasser Sullivan Lexus RC F GT3, placing eighth in the overall GTD driver standings. The No. 12 Lexus earned four top-five finishes, including three podiums, a third-place finish at Petit Le Mans and seconds at Mid-Ohio Sports Car Course and in the Watkins Glen International sprint race.

The 2022 season will mark the fourth year Lexus and Vasser Sullivan have partnered together. During that time, the Lexus RC F GT3 has earned seven GTD class wins, 18 podiums and nine pole positions.

Quotes:
Vasser Sullivan Team Principals Jimmy Vasser and James ‘Sulli’ Sullivan:
“It’s with great excitement we unveil that Aaron, Frankie and Richard will pilot the No. 12 Vasser Sullivan Lexus RCF GT3 as we set our sights on the 2022 IMSA GTD class championship. Individually Aaron, Frankie and Richard each have wins and podiums with our organization, so it made sense to band them together as co-drivers. We’ve got a lot of faith in these guys collectively to lead us to a championship and our recent Daytona test confirmed we’ve made the right choice.  We’ll be announcing our fourth driver for the Rolex 24 Hour race in the coming weeks.”

Jeff Bal, Lexus Motorsports Manager:
“We’re thrilled with the driver lineup that Vasser Sullivan has put together for the No. 12 Lexus this season. Frankie, Aaron and Richard know the car well and all three have earned wins, podiums and poles behind the wheel of the RC F GT3. Their experience in the Lexus combined with good chemistry creates an advantage for the 12. Both Jimmy and Sulli have done a great job pulling together a winning driver lineup and building an excellent crew to make sure the Lexus will be in position to earn podiums throughout the season. The team is energized and we’re excited to watch them go out and fight for the GTD championship in 2022.”

Aaron Telitz:
“I’m thrilled to be taking the reins of the No. 12 Lexus RCF GT3 for Vasser Sullivan! I started my IMSA career in the 12 car before moving to the 14 and it’s been an amazing two years of full-time running with Jack (Hawksworth) in GTD. Now, Frankie and I are reuniting to lead the 12 side in GTD for Vasser Sullivan and Lexus. We’ve got Richard on board as the endurance driver which is big too as we have three guys who all have experience in the RC F and know what it takes to win in it! Huge thanks to Jimmy and Sulli, and everyone at Lexus for putting their faith in me once again. I can’t wait to get to work in Daytona next month!”

Frankie Montecalvo:
“So great to be able to race with the Vasser Sullivan family for the fourth year. We have had great success and momentum that I look forward to continuing. Each year we get stronger and stronger, so I feel this year we will be a major championship contender.”

Richard Heistand:
“I’m very excited to be joining Frankie and Aaron in the No, 12 Vasser Sullivan Lexus RC F GT3 for the North American Endurance Championship and it feels good to be a part of the Vasser Sullivan and Lexus family once again. It’s an honor and also a responsibility whenever you are in the seat of a Lexus because behind it is the hard work, aspirations, and goals of so many people. Let’s go out there and deliver baby!”