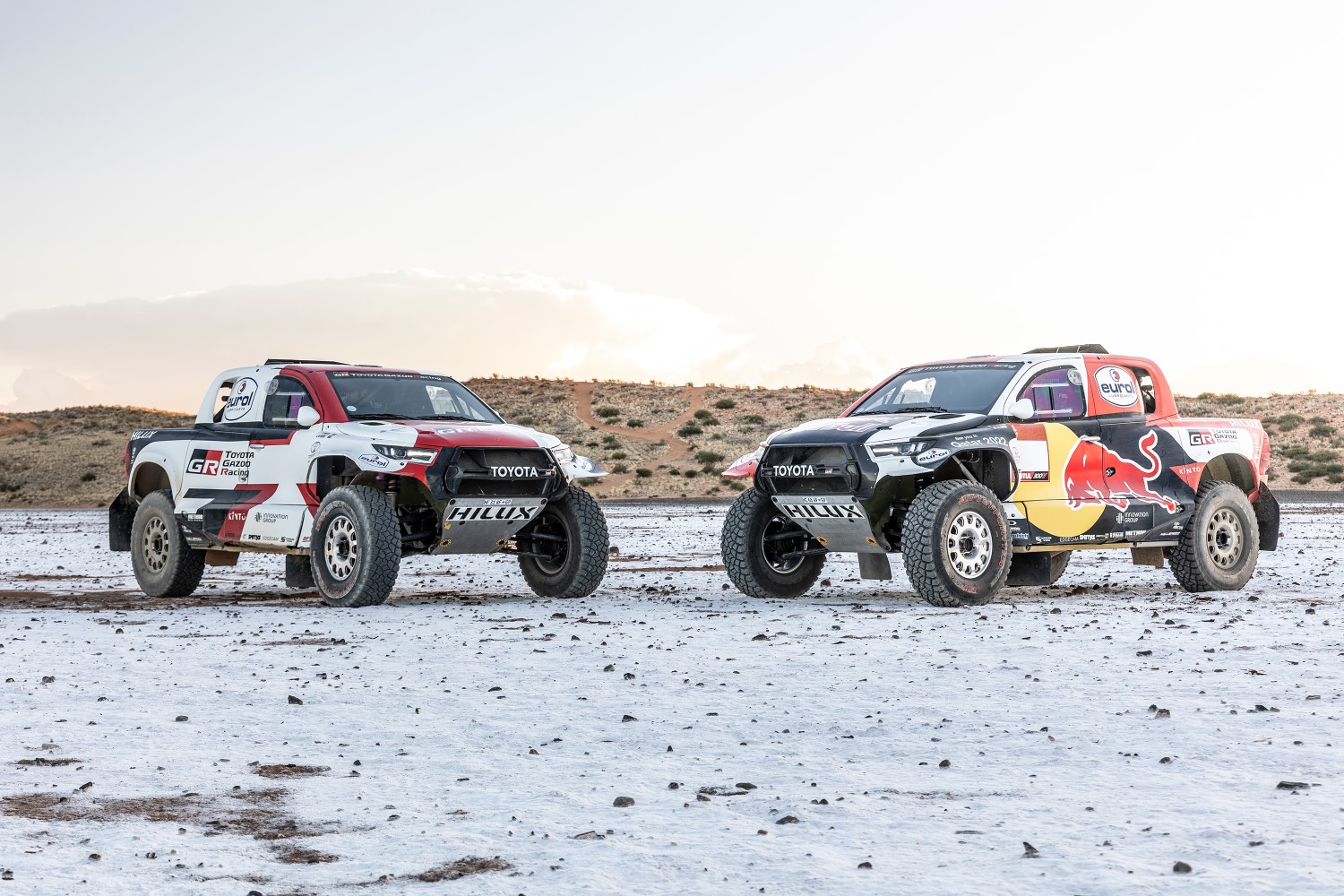 TOYOTA GAZOO Racing will be entering a four-car team for the 2022 edition of the Dakar Rally. This team will again be spear-headed by 2019 Dakar Rally winners Nasser Al-Attiyah and Mathieu Baumel, with Giniel de Villiers and co-driver Dennis Murphy assisting in the attack. 2021 saw Henk Lategan join the Dakar Rally as a rookie, but the triple South African Cross-Country champion and his co-driver, Brett Cummings, will be looking to improve on their performance during the previous race, where they crashed out on Stage 5 after a strong opening. Finally, Shameer Variawa and new co-driver Danie Stassen will complete the line-up for TOYOTA GAZOO Racing at Dakar 2022.

Nasser Al-Attiyah and co-driver Mathieu Baumel are fresh from victory at the Hail International Rally, which also secured them the 2021 FIA World Cup for Cross-Country Rallies, making them the clear favorites to win the upcoming Dakar Rally, which takes place in Saudi Arabia from January 1, 2022 until January 14, 2022.

Nasser and Mathieu sealed the World Cup victory after winning four of this year’s six events, including the Andalusia Rally, Rally of Morocco, Abu Dhabi Desert Challenge, and the Hail International Rally. The pair elected to sit out two rounds, due to prior commitments, effectively winning every round they entered.

While the World Cup was won using the previous specification Toyota Hilux, the team will be fielding the all-new Toyota GR DKR Hilux T1+ at the Dakar Rally, which will be the car’s maiden international outing with the team. The new car features the twin turbo V6 petrol engine from the new Toyota Land Cruiser, together with bigger wheels, a new, single-shock suspension system with more travel, and a bold new look.

The new car has been thoroughly tested, with the latest session in the Kalahari Desert confirming the team’s setup for the 2022 Dakar Rally. A new damper setup has been employed in the car, and comprehensive testing at the team’s private facility has shown significant progress in terms of the development of the new car. Both Nasser and Giniel de Villiers have tweaked the car over the final weeks before the race, and the team is confident that the current setup offers an excellent balance between handling and outright speed.

The 2022 Dakar Rally is not only one of the toughest automotive races in the world, but it is also the first round of the new FIA World Rally-Raid Championship (W2RC). Nasser and Mathieu will be campaigning the new GR DKR Hilux T1+ in next year’s championship, and as such the Dakar Rally plays a pivotal role in TOYOTA GAZOO Racing’s quest to secure the inaugural W2RC manufacturer, driver and co-driver titles.

Dakar 2022 is set to start on January 1st, with a liaison from the city of Jeddah to Ha’il. The road section covers 815km, and will be followed by a short, timed section of 19km, which will be used to determine the starting orders for Stage 1.

The route then moves in a clockwise direction, visiting towns such as Al Artawiyah and Al Qaisumah before reaching the capital of Saudi Arabia, Riyadh. Here, the bivouac will remain in place for several days, until the rest day on January 8th. From Riyadh, the race will continue to Al Dawadimi, Wadi Ad Dawasir and Bisha, before concluding in Jeddah on January 14th.

Glyn Hall, Team Principal: “The team is fully prepared for the upcoming Dakar, and we are excited to test our new Hilux T1+ against the competition. We’re confident that the new car has put us on an all new level, but you never know just how good you are until the flag drops for the start of the race. We can’t wait to get going in Hail.”

Nasser Al-Attiyah: “We are very proud of winning the 2021 World Cup – a third victory for TOYOTA GAZOO Racing. The car that brought us all the wins in 2021 was extremely reliable and very fast, but the new car is definitely better. We’re ready to attack from the start at the Dakar Rally, as we’ll be aiming for the top step of the podium.”

Giniel de Villiers: “We’ve been plagued by many punctures during the previous few Dakar Rallies, but we hope that the new T1+ specification will give us an opportunity to attack throughout the event. The new car and new engine is a powerful combination, and we are confident that we’ll be able to take the fight to the competition.”

Henk Lategan: “For me, Dakar 2022 is a chance to show what I am truly capable of. Brett and I had an excellent outing at Dakar 2021, but unfortunately our progress was cut short in Stage 5. We are very excited about our prospects for the upcoming event.”

Shameer Variawa: “Last year was my first Dakar finish, but I am confident that 2022 will bring an even better result. This time around, I don’t just want to finish – I want to show what I’m capable of in one of the world’s toughest automotive races. The new Hilux T1+ is an extremely good car, so now the work is up to me and Danie Stassen, who will be racing in his first Dakar Rally.”