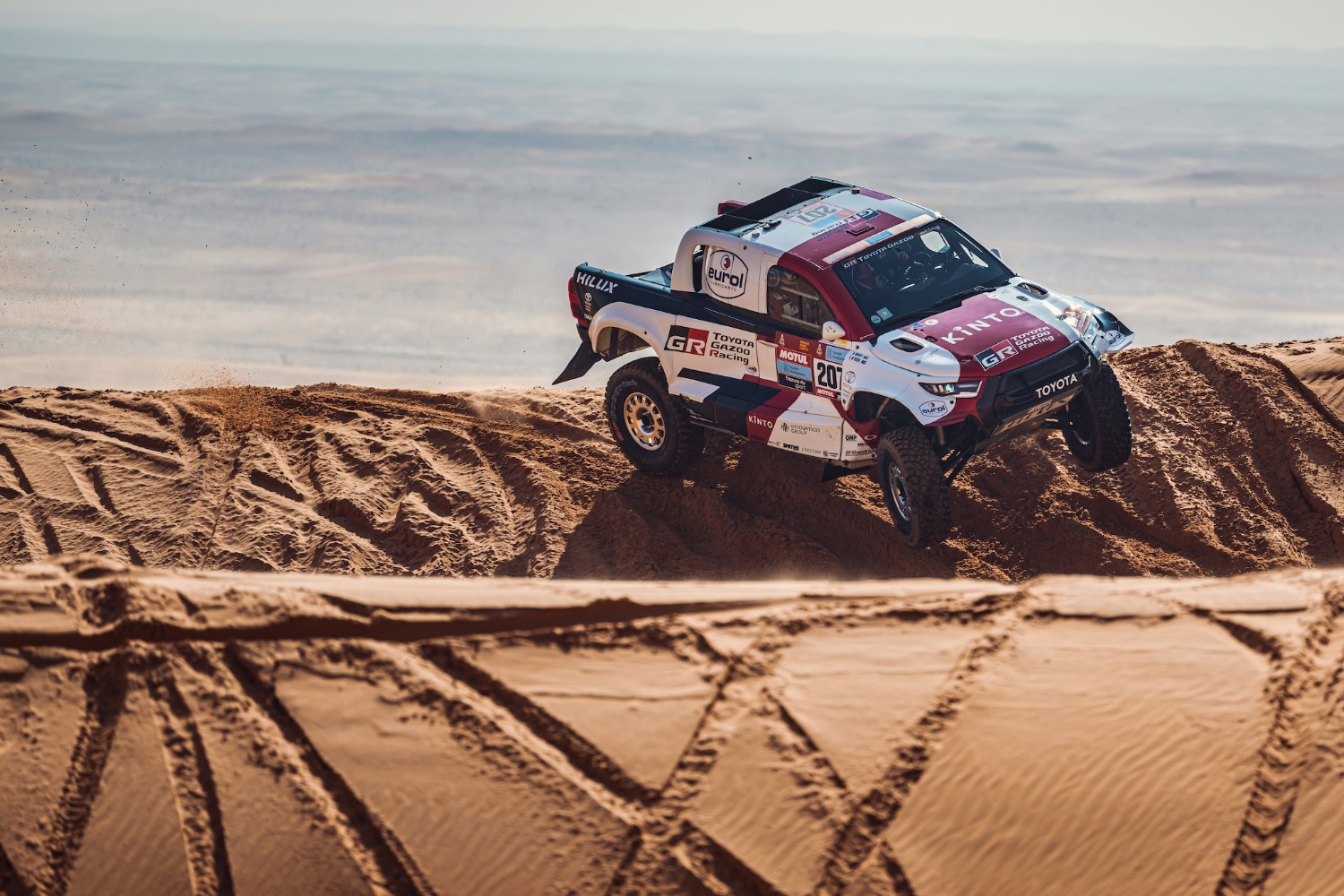 Today (Saturday) is a rest day for the Dakar Rally participants, and it could not come soon enough for the Toyota team after an eventful Friday.

The final stage leading up to the mid-point of Dakar 2022, Stage 6, saw TOYOTA GAZOO Racing’s Shameer Variawa and co-driver Danie Stassen record their best finish of the race to date, posting the 7th-fastest time on the stage. The GR DKR Hilux T1+ crew trailed the stage winners home by 4min 6sec, moving up into 17th place in the overall standings.

The South African pairing started as the 24th car on the road, and made the most of their position towards the middle of the field. They powered their Toyota Hilux through a very tricky stage of 348km that saw many of the top crews falter. Their car ran perfectly throughout the stage, and they came through without any punctures, bringing them to the mid-point of the race well within the Top 20.

Nasser Al Attiyah and co-driver Mathieu Baumel continued their steady progress at Dakar 2022, taking no chances during the final stage before the Rest Day. The Qatari driver and his Andorran co-driver recorded the 10th-fastest time on the day, trailing the stage winners by 6min 16sec at the end. Even so, they increased their lead in the overall classification to 48min 54sec, with six stages to go.

In an about turn, the FIA stewards decided to reverse their decision to penalize Giniel de Villiers and co-driver Dennis Murphy for an incident with a biker during Stage 2 of the rally, based on new evidence they received. Their initial penalty of five hours sent the pair tumbling down the order, but the TOYOTA GAZOO Racing crew continued to push despite the setback, and with the penalty removed, find themselves in 4th place in the overall standings, 51min 56sec behind teammates Nasser and Mathieu.

The South Africans suffered a single puncture on Stage 6, but lost time due to poor visibility towards the end of the stage. Despite this, they posted the 14th-fastest time on the stage, 9min 19sec behind the winners. They go to the Rest Day with a podium position in reach, as they are just 1min 31sec behind third place, and 3min 2sec behind second.

Stage 6 was a challenging one for the winners of Stage 5. Henk Lategan and Brett Cummings recorded their first Dakar stage win the day before, but this meant that they had to open the road Stage 6. With the bikes following a different route, there were no tracks for the Toyota Hilux crew to follow, and they had to pick their own way across the Saudi Arabian landscape.

Two punctures in the latter part of the stage didn’t help their cause, and they lost 24min 20sec on the day. This sees them slip to 42nd in the overall standings, after losing significant time earlier in the race.

The Rest Day follows next, and will give the race crews a chance to recuperate while the technical crews repair and prepare the cars for the final six stages of the 2022 Dakar Rally. The event started with a prologue on January 1st, and six stages were completed before the Rest Day near the Saudi Arabian capital of Riyadh. The rally is scheduled to end on January 14th, in the city of Jeddah.

QUOTES:
Glyn Hall, Team Principal: “Today saw Shameer and Danie show their true pace, in a stage that was really surprisingly tricky, especially when it came to navigation. They had a clean run with no punctures, and we’re really pleased to see them do so well. At the same time, Nasser and Mathieu managed the stage very well, maintaining their position at the head of the field, going into the Rest Day with a handy lead. Giniel and Dennis also kept their heads down and their noses clean, and they continue to post highly competitive stage times. It was a bit of a tough day for Henk and Brett, having to open the road after winning Stage 5. But they came through without any real drama. Overall, we’re pleased with our performance on Stage 6.”

Nasser Al-Attiyah: “It was a tough but good day for us. The navigation was especially difficult, but Mathieu again did a good job. Our car and the tires have been working well. The last part of the stage was very difficult, but everybody just followed us out. We are very happy to have a good lead after the first week of the rally, and now we just have to concentrate on managing the race during the second week of the Dakar.”

Giniel de Villiers: “Today’s stage was quite tricky, with difficult navigation, and towards the end the visibility in the dunes was really bad. We all ended up following Nasser through the final section, and a lot of cars finished together. In the end it was a good stage for us, with only one puncture and otherwise no problems.”

Henk Lategan: “A really tough day for us. We started okay, even though it was difficult to open the road. But we managed a good pace at the start, until we went wrong in one of the canyons. We lost a lot of time there, but so did many other crews. We eventually picked up the correct route, and quickly got back to the head of the field, only to get lost again near a river. After finding the route again, we had two punctures, and in the end, we joined the front-runners for the final dune crossing to the finish.”

Shameer Variawa: “Today we had a clean run, no punctures, no problems. There was a lot of dust though, and we were quite surprised with our time when we got to the finish. We thought we’d be quite far down, especially with all the dust, but I see we posted a good time. Overall, it was a good stage for us.”