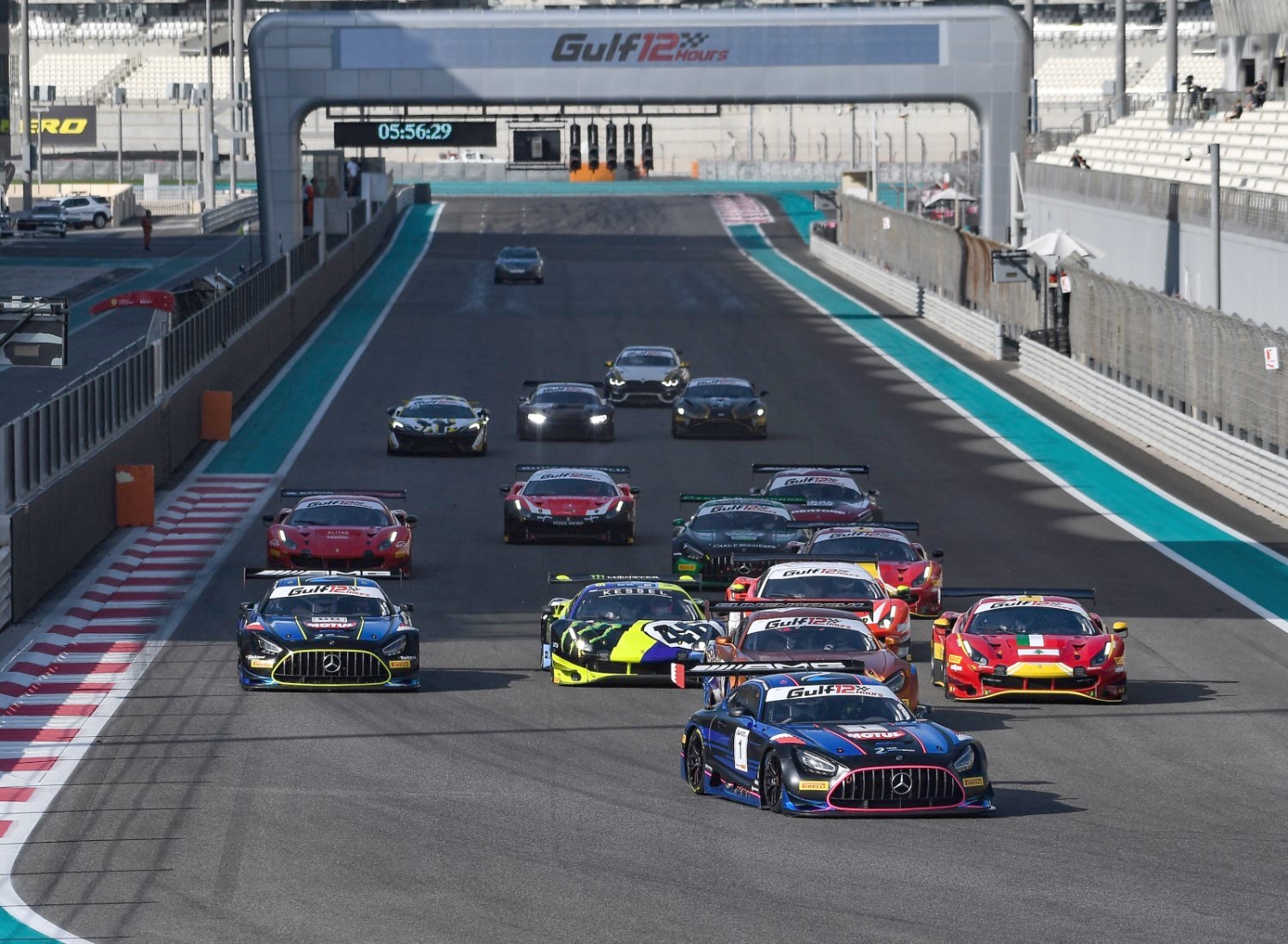 Having led a team 1-2 in the opening six hours of the race, an issue for the sister #66 Mercedes with just over two hours remaining, forced it into the garage allowing the #88 SPS Automotive Performance Mercedes-AMG GT3 to un-lap itself and take second position.

The #46 VR46 Ferrari 488 GT3 also made its way up the order, demoting the #66 Mercedes to fourth overall and from first to third in the ProAm class.

The early stages of the second part of the race were the most entertaining. As the #1 Mercedes sprinted clear in the hands of Barnicoat following a full brake calliper change during the interval, the #66 sister car lost its second place almost immediately to the #88 Mercedes of Dominik Baumann, while the #46 Ferrari of Alessio Salucci bolted up the inside of the #51 AF Corse Ferrari 488 of Alessandro Cozzi.

The #99 Attempto Racing Audi R8 LMS, which suffered gearbox failure in the opening six hours, returned with a fresh ‘box and a resurgent Dries Vanthoor.

The Belgian driver, in the knowledge that the car was stone last and more than 50 laps behind the leading Mercedes, was on a charge. He scythed through the field, quickly making his way up to and past Ben Barnicoat in the #1 2 Seas Mercedes-AMG, setting multiple fastest laps on his way.

“It was a fun start,” Vanthoor said. “I worked my way through the field, and took my time to catch Ben. He was on a similar pace but I was happy to get past him in the end.

“We’ve been quite unlucky all weekend. We had problems in qualifying, were late out of the garage for the race start, and had a broken brake disc in the first part of the race. But it was good to reward the team.

“I tried to get to the front as fast as possible. At Turn 1 I was so surprised by one driver who braked in front of me, I was laughing! It was good fun.”

But that would be the extent of Vanthoor’s fun for the race. With four hours remaining, team-mate Alex Aka collided with the #61 AF Corse Ferrari 488 of Conrad Grunewald. The left front bodywork of the Audi suffered severe damage as Aka mistook his braking into the final corner, and that brought an end to the race for the Attempto Racing Audi.

“”It’s my mistake, I saw a gap and I’m sorry for that,” Aka admitted. “I thought there was room on the inside. I’m going to have to come back next time to make up for it.”

The #46 Ferrari meanwhile, was also on a charge. David Fumanelli consistently reduced the gap to the #88 SPS Mercedes at an incredible rate. And his efforts were rewarded when the #66 2 Seas Mercedes-AMG was forced into the garage.

A small portion of the car’s skid block had dropped towards the Tarmac, creating sparks for several laps before it was beckoned into the pits. That promoted the #88 SPS and #46 VR46 up a place, demoting the #66 to fourth. That became fifth place when the charging #51 Ferrari of Eddie Cheever III went by Ian Loggie.

In the final hour, Barnicoat handed over to Martin Kodrić to bring the #1 Mercedes-AMG home and score back-to-back victories following their 2021 Gulf 12 Hours Bahrain victory. But the focus was on the battle for remaining top four positions, with Baumann back behind the #88 SPS, Fumanelli in the #46 VR46 and Cheever remaining in the #51 Ferrari.

Cheever’s challenge was the only one to faulter; a loose driver’s door prompting a pit stop that lost the car a place to Casper Stevenson’s #66 Mercedes-AMG.

It resulted in the #88 SPS Mercedes-AMG scoring the GT3 ProAm class victory in second place overall. The VR46 Ferrari took third, its second overall Gulf 12 Hours podium in three appearances and second in the ProAm class.

Stevenson took the checkered flag fourth overall in the #66 Mercedes-AMG and stepped on to the bottom step of the ProAm podium, completing an outstanding GT race debut for the 18-year-old, with the #51 Ferrari fifth overall and fourth in ProAm. The Baron Motorsport Ferrari 488 Challenge faded in the second part of the race to finish fifth in class.

That enabled Grunewald to take the lead and hold it to the chequered flag. The #33 Kessel Racing Ferrari 488, brought home by Francesco Zollo, remained in third place throughout.

They maintained a consistent lead over the #15 Century Motorsport Aston Martin Vantage that finished second. The #42 Century Motorsport BMW M4 ran consistently until two and a half hours remaining, when it suffered from a combination of rear driveshaft and differential woes.

Ben Barnicoat, #1 2 Seas Motorsport Mercedes-AMG GT3: “This is a race I greatly enjoy. It may have looked easy for us, but it was certainly a challenge. I’ve never driven a Mercedes before this week, and you always have to push as much as possible as in endurance racing, you never know what may happen. The team did a great job to change all the brake callipers during the break after we found one leaking. The interval isn’t a lot of time, and it’s also a risky thing to do. It was a big job.”

Casper Stevenson, #66 2 Seas Motorsport Mercedes-AMG GT3: “There was a lot of preparation for this week. Throughout testing my times were very similar to Ben [Barnicoat] and Martin [Kodrić]. But in qualifying, we took a step forward and the race another still.  We suffered damage early on in the second half of the race, and so the lap times were not there. But in the first half, everyone saw that we were the quickest car and fighting for the lead. It’s been an amazing weekend to learn so much, it’s been very different to what I’ve been used to, and it gives me an indication of what it will be like in GT World Challenge Europe later this year.”