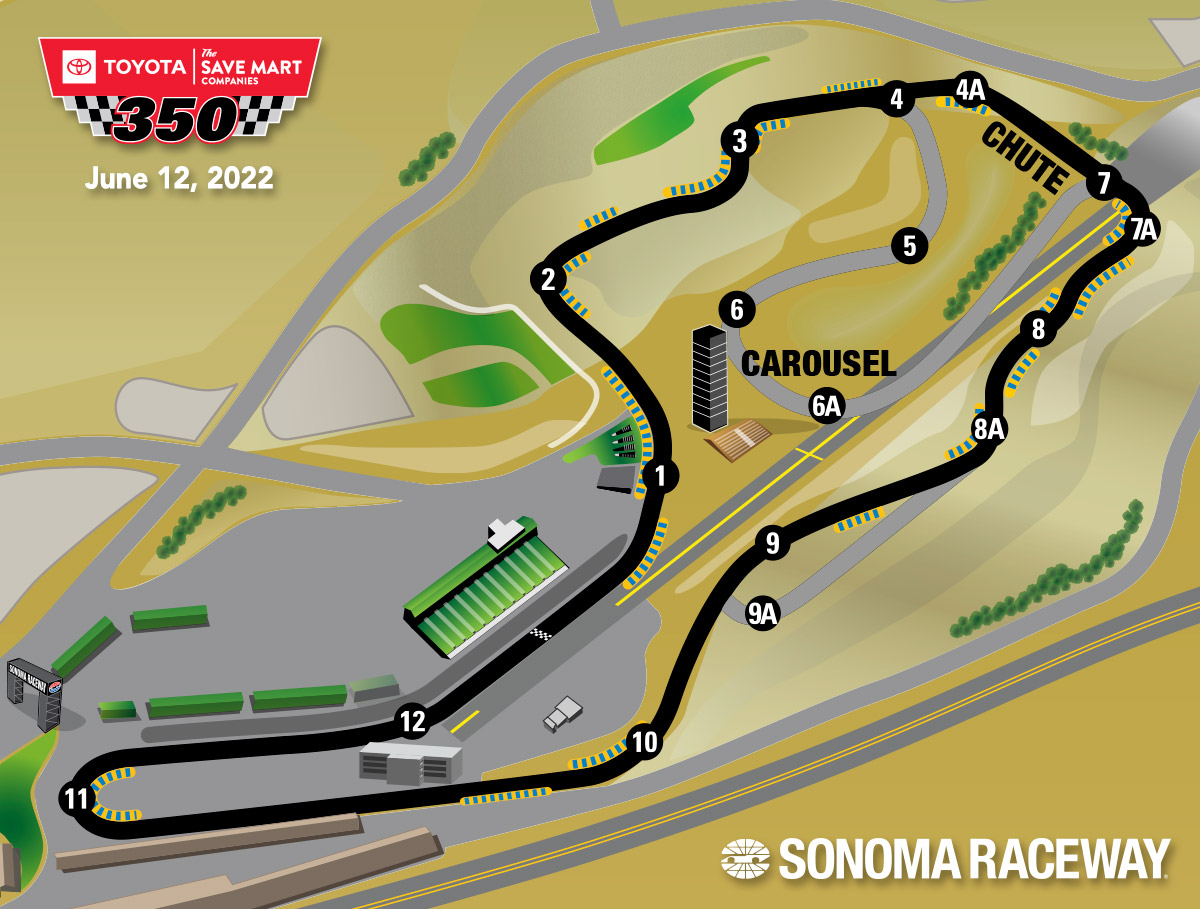 There’s nothing like high speed turns at an iconic road course, and this year, NASCAR drivers will be flying down the Chute once again as Sonoma Raceway and NASCAR announced the return of the popular stretch of racetrack during the June 10-12 race weekend.

“We heard from many fans and drivers how much they loved it when we raced the Chute,” said Sonoma Raceway EVP and General Manager Jill Gregory. “The Carousel was part of the original course and we reverted back to it for our 50th Anniversary in 2019 and used it again in 2021. But we race to bring excitement and drama to the fans, and an overwhelming majority of them asked us to bring back the Chute.”

Since the Toyota/Save Mart 350 Cup race length will remain at 350 kilometers, the race will be extended from 90 laps to 110 laps, giving fans more opportunities to see the cars battle for position. It also sets Turn 7 up as a high-speed corner where many legendary passes and confrontations have occurred.

“It will be more exciting for the fans just because those are a couple of wild corners with some new hairy passing zones,” said 2021 NASCAR Champion and Toyota/Save Mart 350 race winner Kyle Larson. “Mistakes can be made in those corners when you’re bouncing over curves so the cars will be moving around a lot. It will be exciting. It will be pretty wild because you can go all the way to exit of Turn 4 on the other side of the curve and barely miss the wall.”

The Chute was constructed prior to the 1998 race and used in every Sonoma NASCAR event through 2018. This stretch of the raceway connects Turn 4 as the cars approach the top of the hill to Turn 7 as the cars prepare for the downhill march through the “S” turns. Martin Truex Jr. was the last driver to win on the Chute layout in 2018.

“Drivers and fans have missed the passing opportunities and close racing created by the Chute so we’ll be returning to that configuration for the NASCAR Cup Series and the return of the NASCAR Camping World Truck Series,” said Scott Miller, NASCAR Senior VP of Competition. “NASCAR has seen drama and incredible action at road course races, and we’re looking forward to even more intensity as the Next Gen race car debuts and the Chute returns at Sonoma.”

Stage breaks for the 110-lap Toyota/Save Mart 350 will be at laps 25 and 55. Saturday’s NASCAR Camping World Truck Series event will be 75 laps with stage breaks at laps 20 and 45. The General Tire 200 ARCA Menards Series West race will be run prior to the Truck race on Saturday.

Tickets for the June 10-12 race weekend are available at www.sonomaraceway.com. Ticket packages including weekend and single-day, camping and fun extras such as pit passes and scanners also are on sale now through the raceway’s website or by calling the box office at 1-800-870-RACE.