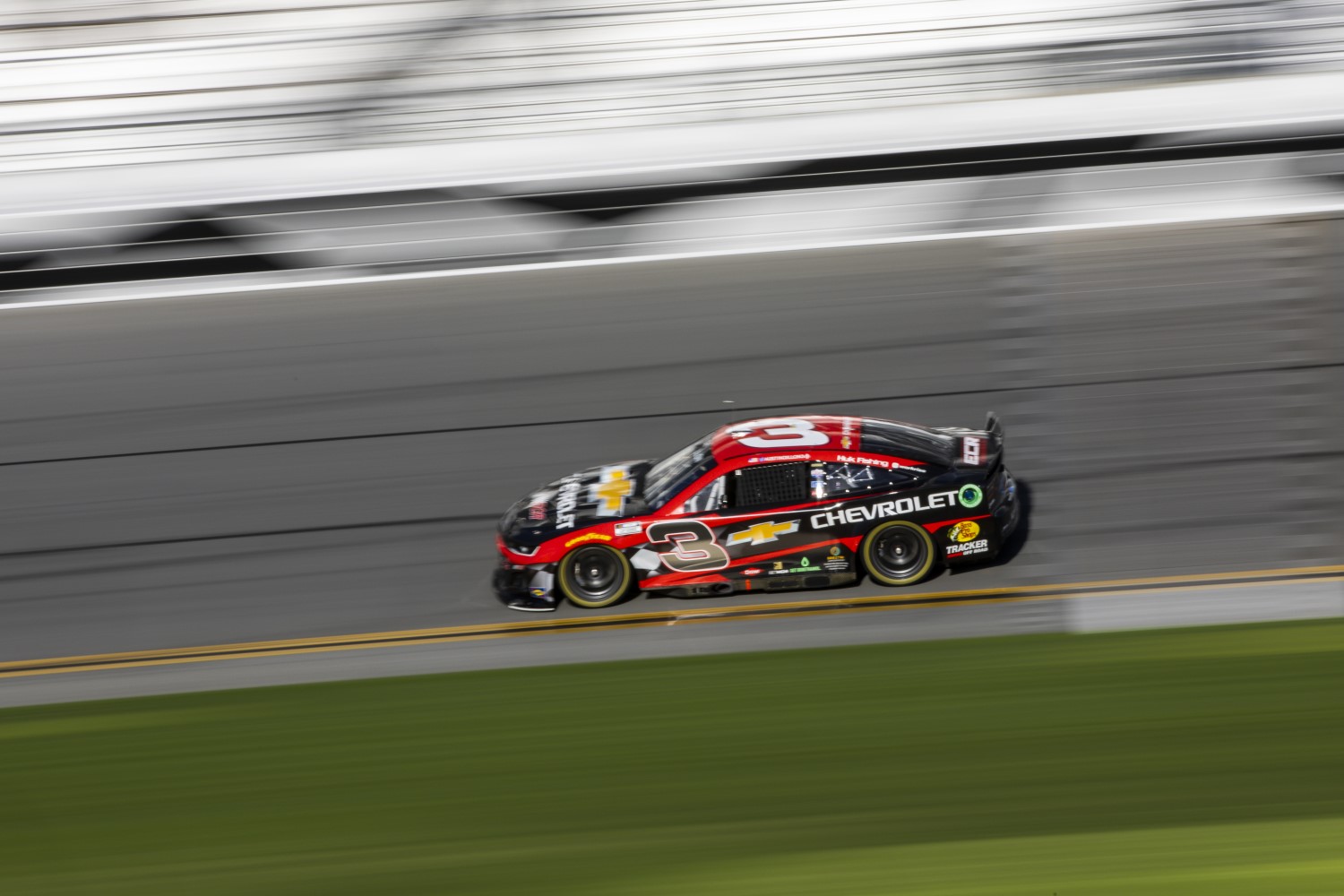 Earnhardt Jr. pleased he participated in Next Gen Test at Daytona

DAYTONA BEACH, Fla. – Only a week away from formally being enshrined in the NASCAR Hall of Fame, two-time Daytona 500 winner Dale Earnhardt Jr. spent Tuesday and Wednesday testing the Next Gen race cars at Daytona International Speedway for his former team, Hendrick Motorsports.

Earnhardt ran the full two day test – participating in a mock sprint race on Tuesday along with drafting practice and single car runs. After one full day in the car, Earnhardt was smiling and eager to share what he’d learned about the new generation of race car – good information he plans to talk about as an analyst on NBC Sports’ broadcasts of the upcoming season.

It was obvious Earnhardt had strong reactions to the new car and remains very optimistic about the potential it has in competition. He offered interesting details and comparisons about the new and previous cars – the feel and the competitive expectations.

“At Daytona, I never drove one of the cars with those big spoilers on the back,” Earnhardt said, noting the 7-inch spoiler on the 2022 cars. “So, I was pretty taken aback when we were drafting just how much drag is on the car.”

As for the steering, he said, “It’s very ‘surgical.’ Somebody used that term yesterday and I think that’s a great way to describe it, very delicate, very small movements of the steering wheel are going to give you the same reaction in the car that a big movement or a lot of movement in the wheel would have in the old car.”

“All these guys that drove with manual steering box, you get muscle memory. And when your car gets loose you got an idea, it’s instinctual how much you have to turn the wheel to correct that slide or catch the car. You know what to do, but you have to relearn all that with the rack and pinion [on new car]. You can’t rely on that muscle memory or instinct, but some guys will to a fault and make those adjustments they did all those years and that could get interesting and maybe a little messy in the race.”

Earnhardt, who finished on the podium in the GT class during the 2001 Rolex 24 at Daytona, will be back at the annual Daytona sports car season-opener later in January working for NBC Sports. But he said he has no plans to race. He recalled racing with his father in that 2001 Rolex and how the sports car regulars told the NASCAR drivers, ‘you only have push 80 percent in the race.’

“Now having worked the race with NBC the last couple years, those guys are [doing] qualifying [laps] every single lap of that race,” Earnhardt said. “These are the best road racers in the world in this race. I got no business out there. I don’t.

“It’s gotten more and more difficult I think for the non-IMSA guy to go into that world and be competitive in that world because of the talent and the ability and the speed, the pure speed of those guys is just ramped way up in the 20 years since I ran. I admire their ability and speed they maintain for 24 hours – the pace they run is pretty incredible to be honest with you.”

“This has been fun,” he said. “I was kind of wondering about my broadcasting and how to do a better job, how to do the best job, and certainly for me having had some time in the car was a big benefit for me.

“I feel so much better about going into the booth today than I did a couple days ago, having not been behind the wheel of the car.”

NASCAR IS ENCOURAGED FROM TWO-DAY NEXT GEN TEST

The second day of testing the Next Gen car on the Daytona International Speedway high banks went as smoothly as teams could expect – with many cars swapping out drivers for the day and a fresh leaderboard of fast times.

NASCAR Cup Series rookie Harrison Burton was fastest on the day with a lap of 195.304 mph, followed closely by his Ford teammate and fellow series rookie Austin Cindric (195.152 mph) – their speeds reflective of the two-car drafting they did for much of the day. Cindric’s Team Penske teammate Ryan Blaney was third (191.898 mph) in a closed session that ended about an hour early of the originally scheduled 5 p.m. checkered flag.

“It’s been a long two days and I would say that we were really happy with where we netted out here,” Probst said. “I feel like this was a pretty good extension of the test that we did in Atlanta about a week ago. We were able to dial in the package a little bit more than when we were here in late 2021.

“Pretty happy with where the speeds netted out. I think if anybody was watching online, they saw that the group run we did yesterday was pretty darn good racing, and some of the drivers got out and said we’re racing hard already. You know, there’s no money or points or trophies on the line, so I think that when we come back here in February, we’re ready to put on a really good show.”

The Next Gen cars will move to the Phoenix Raceway mile for one final test before the Feb. 6 Busch Light Clash at The Coliseum (8 p.m. ET on FS1, MRN, SiriusXM NASCAR Radio) exhibition.

Perhaps one of the most unexpected drivers to test at Daytona was 1995 Indy 500 winner and 1997 Formula 1 champion, Jacques Villeneuve. The 50-year-old Canadian drove the No. 27 Team Hezeberg Ford – turning in lap times Tuesday that were consistently mid-pack despite the fact he has not been in a NASCAR Cup Series car in years outside of a test at the Charlotte ROVAL last Fall. He was dead last Wednesday.

He missed qualifying for the 2008 Daytona 500 after finishing 23rd in his Duel race. But the 11-time F1 race winner said his hope is very much to run in the Feb. 20 Daytona 500 and he was quite encouraged by the way these new Next Gen cars drove during this Daytona test.

He has four previous NASCAR Cup Series starts – the last in 2013 on the Sonoma, Calif road course. He had four top-five finishes in nine NASCAR Xfinity Series road course starts with a best of third place three times – at Montreal in 2010 and 2012 and Road America in 2011.

“I’ve never stopped racing, it’s just a question of opportunity and I’m living in Europe so it makes it a little more difficult to focus on racing here in North America,” Villeneuve said, noting that he also does Formula 1 television commentary and has been expanding his family.

The small Hezeberg team he’s driving for, was originally going to put one of its family members in the car, but that driver is not approved yet for the series, according to Villeneuve.

“I felt great. I did a few laps on the ROVAL test, but to get back on the speedway, this is THE race. There’s a few races in the world that stand out, the Indy 500, the 24 Hours of LeMans and Daytona. So it’s part of that very small group of special races and tracks to drive at.

“It would be amazing,” Villeneuve added. “The last time I was in the NASCAR garage was a lot of years ago. It would be extremely special because it’s a very special race and hard to get in the show when you have to qualify on time or do good in the Duels, so it makes it a bit more stressful and making the show would be something special.”

Joey Logano, the 2015 Daytona 500 winner and 2018 NASCAR Cup Series champion, was upbeat about the Next Gen cars and the Daytona Test. And the Team Penske driver insists he has high expectations for 2022.

“The risk versus reward piece you have to think about a lot,” Logano said of drafting – something drivers were really practicing on Wednesday’s final day of testing.

“Nothing real crazy stood out, just finding little differences,” Logano added, “You start stacking those things up, it becomes pretty different. But it’s a bunch of little things, not one ‘wow this is so different from the past.’”

“It’ll be exciting,” he said with a smile.

Logano, who has four superspeedway victories, three at Talladega, Ala. in addition to his Daytona 500 win – is traditionally strong on the big tracks and his insight on Wednesday was well-received.

“Taking what was the 550 package and wide open all around, there’s only so much I can do or the team can do, so this definitely opens the door for the cream of the crop to rise to the top.

“It’s gonna be the best of the best that will win races and that’s what it should be,” he continued. “That’s what our sport was built on and I think it will continue to move in that direction.”

“When I think about the Daytona 500 sold out a month in advance it helps every stakeholder in the industry. … it’s very powerful,” Kelleher said.

The enthusiasm for the 2022 season was evident even this week during a two-day Next Gen Test session at the track. More than 10,000 people turned out Tuesday to watch the Next Gen cars get some practice laps before their official competitive debut in the Daytona 500.

And while much of the facility is sold out for the race, Kelleher reminded that there are still prime admission tickets to the Fanzone, which put you inside the track with access to the garage windows and close to the Luke Combs pre-race concert.