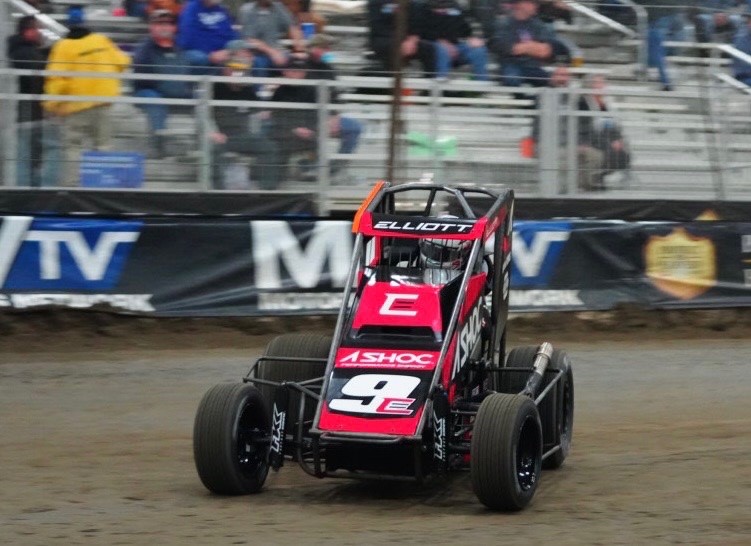 Kyle Larson, Chase Elliott and Alex Bowman made the trek to Tulsa, Oklahoma, to compete in the annual midget competition at the Tulsa Expo Center.

Elliott was the first Hendrick Motorsports driver to hit the quarter-mile clay oval Monday, kicking off his busy night with a win from the pole in an eight-lap heat race.

“It felt okay. I kind of missed the bottom there on a few occasions,” said Elliott after his first career Chili Bowl heat win. “I was expecting someone to be there. I know I still have a lot to clean up but I’m proud of the effort and excited for the rest of the night.”

Not a bad way to get the week started for @chaseelliott. 🏆@cbnationals | #ChiliBowl2022 pic.twitter.com/1pBZvR3tMF

The 2020 NASCAR Cup Series champion, who is driving for Kyle Larson Racing in the No. 9E A SHOC Performance Energy entry, then finished fifth in his qualifier before earning an eighth-place finish in the first of two B-Features.

Elliott will race again this Saturday, Jan. 15 with a spot in the F-Main, having to work his way up the Alphabet Soup for a spot in the main event.

Bowman, who is fielding his own entry with sponsorship from Ally, also competed Monday and kicked off his night of racing with a fourth-place effort in his heat race. He went on to win his 10-lap qualifying race, which secured him a spot in that evening’s A-Feature.

“My goal was to make the prelim features, so appreciative that I was able to do that,” Bowman said at the end of the night. “The race car was super good. I have to thank Ally for coming on board. It’s so cool to see banners hung up in here that say Ally, have a booth here and all the stuff they that have put into this event is amazing. We had a good night.”

Bowman’s ninth-place finish in the A-Feature places him in the C-Main on Saturday.

On Tuesday, it was dirt racer extraordinaire Larson’s turn to hit the dirt track. After finishing second in his heat race, the 2021 NASCAR Cup Series champion put on a show by advancing from sixth to first in his qualifier, taking the checkers that placed him on the pole for the A-Feature later that night.

Larson went on to lead the most laps from the pole but lost the top spot to eventual race winner Buddy Kofoid after a restart on lap 23. His strong run and second-place finish locked him into Saturday’s championship A-Main where he will battle for his third consecutive Chili Bowl Nationals title.

“It was a fun race,” Larson said after the race. “I made a bad decision on that restart. The entry was getting so slow that I felt like if (Kofoid) was getting anywhere close to us that he could throw a slider on me had I gone straight to the top. So in my mind, I thought maybe if I hit the bottom for one corner I could get back to doing what I was doing and I just missed it a little too much.

“Bummer that I didn’t win but we are locked in and giving ourselves a shot on Saturday.”

Saturday’s feature races – the Alphabet Soup – begin at 10 a.m. ET and will be streamed live on FloRacing.com/events. Opening ceremonies for the final features and main event, which kick off at 7 p.m. ET, will be broadcast live on MAVTV and online with MAVTV Plus.