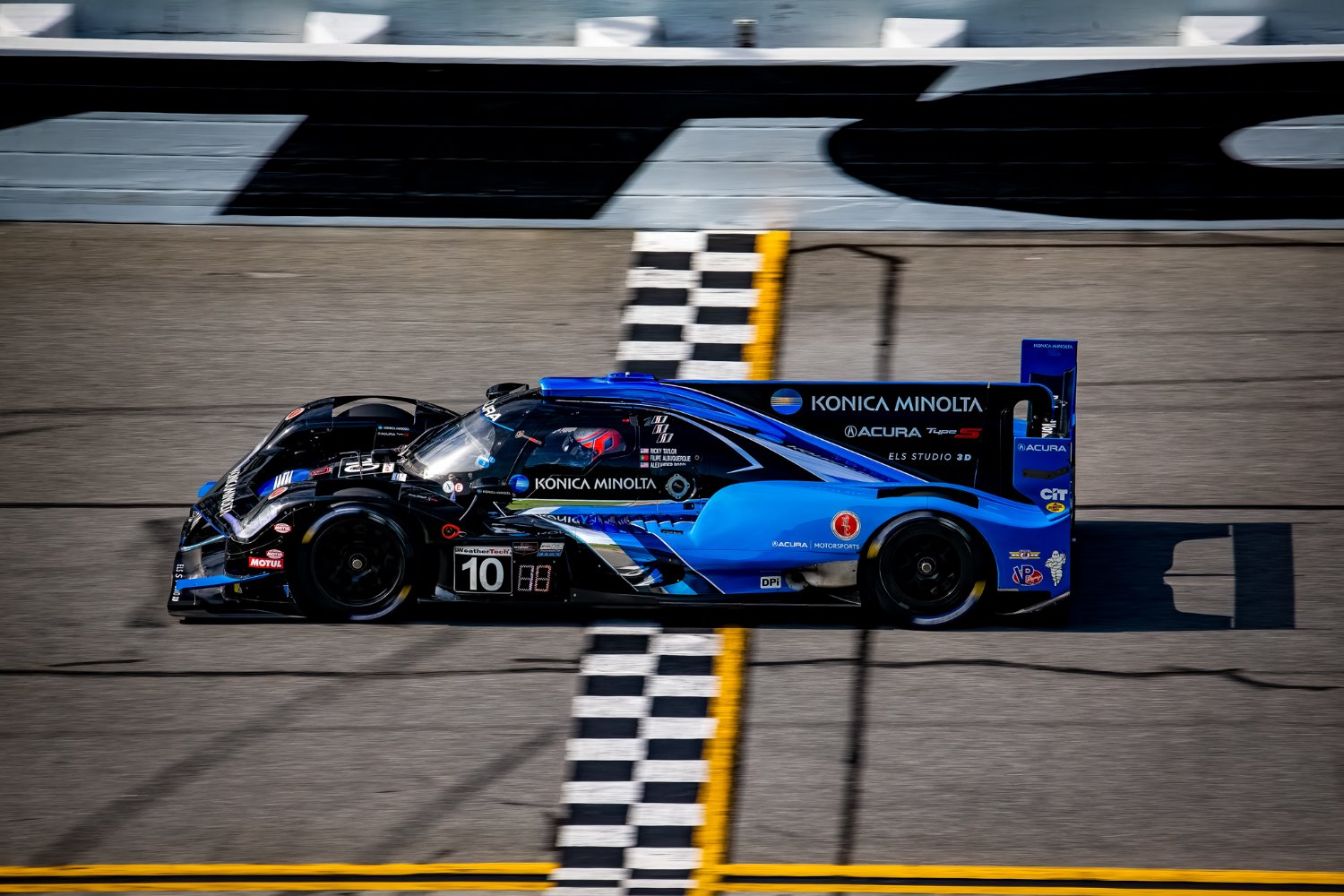 Following contact on the final lap battling for the lead, Ricky Taylor held off a Richard Westbrook to claim victory in Sunday’s qualifying race for the Rolex 24 at Daytona to put the No. 10 Wayne Taylor Racing Acura ARX-05 on pole for the IMSA WeatherTech SportsCar Championship season opener.

Taylor crossed the line 7.9 seconds ahead of the No. 5 JDC-Miller Motorsports Cadillac DPi-V.R following last-lap contact in Turn 1 battling for the lead that saw the #5 Caddy briefly spin in Turn 1.

The defending Rolex 24-winning Acura took over the lead following the second and final round of pit stops in the 100-minute caution-free contest at Daytona International Speedway, but was pressured hard by Westbrook.

“It was only 100 minutes, but that was a very stressful, hard race,” said Taylor.

“The car was great, everyone at HPD has done a fantastic job to keep evolving and improving the ARX-05. The Konica Minolta Wayne Taylor Racing team also keeps continuing to improve. We have to keep working this next week [leading up to the Rolex 24] as I think everyone is going to be coming for us. But we’re starting in the best possible spot [pole], and looking forward to going again – this time for 24 hours.”

“I can only drive to what you give me, and you gave me something good,” Westbrook said to JDC-Miller MotorSports managing partner John Church.

Light contact with the front-running No. 60 DPi driven by Ricky Taylor on the white flag lap negated Westbrook’s challenge for the victory over his former teammate.

“This was good practice because the first stint of the race is going to be similar – sunny but cold – and our car is performing well,” Westbrook said. “We’ll keep working hard and getting to where we want. There’s more to come.”

Taylor and Albuquerque will be joined their slower teammates – Alexander Rossi and Will Stevens – for next weekend’s twice around the clock classic.

A late fuel-only stop for the No. 31 Action Express Racing Cadillac handed third to the No. 48 Ally-sponsored entry driven in the race by Kamui Kobayashi and Jimmie Johnson.

The No. 60 Meyer Shank Racing Acura DPi of Tom Blomqvist and Oliver Jarvis came home fourth after taking in a short fuel load during its initial stop.

Both Chip Ganassi Racing Cadillacs were mired down in fourth and fifth, respectively, after serving drive-through penalties for speeding during their first round of pit stops.

TR3 Racing broke through to claim the GTD Pro class win and pole for the Rolex 24, courtesy of a pass by Mirko Bortolotti on Alessio Picariello with 15 minutes to go.

The Lamborghini factory driver finished 0.475 seconds ahead of the No. 79 WeatherTech Racing Porsche 911 GT3 R after coming from third on the final round of stops.

WeatherTech Racing’s three entries for the 60th running of the WeatherTech SportsCar Championship Rolex 24 At Daytona will start second, fourth, and fifth in GTD Pro for the Jan. 29-30 twice-around-the-clock race.

The No. 79 WeatherTech Racing Porsche GT3 R was the highest finishing WeatherTech liveried car in today’s running of the Roar Before the 24 100-minute qualifying race that sets the grid for next weekend’s Rolex 24 Hour At Daytona.

Julian Andlauer had the wheel of the No. 79 WeatherTech Racing Porsche 911 GT3 R for the start of the race. The Frenchman started ninth in the GTD Pro category based upon his qualifying time yesterday of 1:47.226. Running in the top five Andlauer gave the controls over to Alessio Picariello at the 45-minute mark. The Belgian managed to drive the red-white-and-blue Porsche to the front to take the overall lead in the GTD Pro category with 26-minutes remaining. He wasn’t able to keep the eventual winning Lamborghini behind him at the end settling for second place.

“After the difficult qualifying for us yesterday, I think we had a great comeback today,” Andlauer said. “This result counts more than yesterday but this is not the final race. We will have to do the maximum next week. We can confirm the baseline is really good and the lineup is grateful for this. Each day the car is feeling better and better. I am quite happy with it. We did not have any contact, so the car is in one piece and that is what is most important.”

Keating and Mikkel Jensen wheeled the No. 52 PR1 Mathiasen Motorsports ORECA LMP2 07 to the Rolex 24 pole position in the Le Mans Prototype 2 (LMP2) class over the team’s No. 11 car co-driven by Steven Thomas and Jonathan Bomarito.

Keating overcame a slow start from the No. 1 starting position in class during Sunday’s qualifying race and lost the lead to Thomas. However, Keating rallied back and pulled away to win by 20.050 seconds.

“It wasn’t until we started passing GT cars that he got held up and gave me the opportunity to pass him,” said Keating, a co-driver for both the No. 5 Cadillac DPi and the No. 52 ORECA LMP2 in the Rolex 24. “Once I got around him, I was really able to manage the traffic very well and use it to my advantage over and over again. That’s initially what allowed me to build the gap.”

The No. 52 car, which Keating and Jensen will co-drive in the race with Scott Huffaker and Nicolas Lapierre, will start eighth overall in the race. Following the No. 11 car on the grid will be the No. 68 G-Drive Racing by APR ORECA co-driven by Rene Rast, Oliver Rasmussen Ed Jones and Francois Heriau.

LMP3
Josh Burdon and Jarett Andretti combined to lap the Le Mans Prototype 3 (LMP3) field and win the class qualifying race and earn the Motul Pole Award in the No. 36 Andretti Autosport Ligier JS P320 they co-drive with Rasmus Lindh and Gabby Chaves.

“Things happened to other competitors and we just happened to run the whole race and set the pace and get through traffic right,” said Andretti, son of the late John Andretti and cousin of Andretti Autosport principal Michael Andretti. “… The (LMP3) cars are not meant to go 24 hours. If you have a problem, you have to fight through the problem and get back on track as soon as possible. … Attrition and survival is really the name of the game in this class.”

“It all went to plan,” Burdon, Andretti’s co-driver, said. “It’s quite a new group they’ve assembled here. It shows we’re on the right track. We have the infrastructure and all the tools available. We have some little things to work on to be strong in the race, but overall, it’s a really good start and good momentum.”