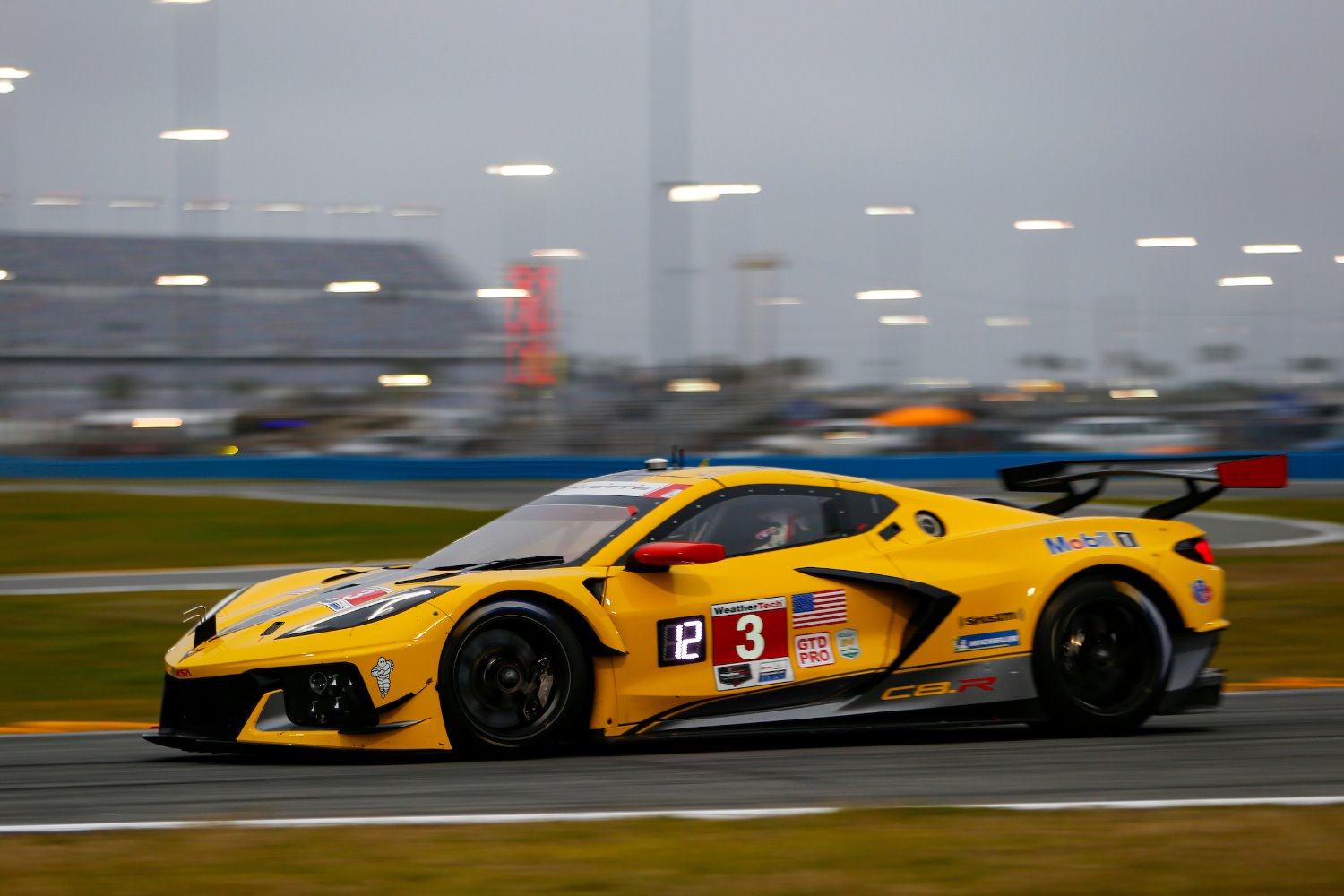 Even though they are slow already due to Draconian measures, IMSA officials have given the two Corvette C8.R entries of Corvette Racing additional ballast weight ahead of this Saturday’s running of the Rolex 24 at Daytona.

As per a pre-event Balance of Performance (BoP) table published Tuesday, the two Corvette C8.R entries have received a 15 kilogram (33 pounds) weight increase compared to the specification they ran in during last weekend’s Roar Before the 24 test.

The team was previously granted a BoP break after it languished at the bottom of the GTD timesheets for the entirety of the Roar Before the 24, receiving a 1.5mm larger air restrictor and a three-liter fuel capacity increase. IMSA seems to believe these changes may have given the two Corvettes a pace advantage over the competition, however, hence the additional ballast.

Speaking to media following the Roar Before the 24 test, Corvette Racing driver Tommy Milner said the team was “not thrilled,” with their overall pace. While IMSA’s BoP adjustments brought the team closer to their rivals, the lack of pace can also be attributed to the team’s unfamiliarity with the new GTD-spec Corvette C8.R, which is heavier than the previous GTLM spec car, rides on different spec Michelin tires and utilizes ABS, among other changes.

Corvette Racing finished up its first three days of official testing and competition in the new GTD (GT Daytona) PRO class of the IMSA WeatherTech SportsCar Championship on Sunday with work to do ahead of the upcoming Rolex 24 At Daytona.

The team finished eighth and ninth in class and 14th and 18th among GTD cars following a 100-minute qualifying race to set the grid for the Rolex 24 on Jan. 29-30. Sunday’s race was the first for the evolved Mobil 1/SiriusXM Chevrolet Corvette C8.R, which ran for all three days in GTD spec for the first time in a full-field setting. The results show the uphill battle facing last year’s GT Le Mans (GTLM) race-winning program. Antonio Garcia and Jordan Taylor – last year’s GTLM champions and Rolex 24 winners with Nicky Catsburg – in the mid-engine No. 3 Corvette C8.R led the team’s efforts but finished a lap behind the class-winning Lamborghini.

The C8.R has undergone a number of changes from its two-year GTLM campaign to bring it in line with the existing GTD cars. Corvette Racing is running with more weight, less power, a higher level of drag, customer Michelin tires and an ABS system for 2022 compared to 2021. Even with a mid-week Balance of Performance adjustment by the sanctioning body in an attempt for more evenly balanced competition, the Corvettes still faced a significant performance deficit in Saturday’s qualifying and Sunday’s race.

Antonio Garcia said, “Knowing how little testing we did before the Roar, we used this race as a big test for tires. There are a lot of different things with the tire regulations where you have to run a certain pressure, and we learned a lot about that. It’s the first experience we’ve had with this. I was driving and learning how to maximize the tire performance. Even if we didn’t have the overall pace to be farther up, I think we can a lot from here for the race. Even if it’s only learning how to run a double-stint, it’s better than nothing. Almost all the other GTD teams have been running this tire on their car for a long time so there is a lot of catching up we need to do on this little thing. Let’s see if we can come back stronger in a few days so we can be where we need to be.”

Garcia’s teammate in the #3 Corvette said, “The race was a qualifying race so you can’t really win too much in that event. It’s pretty much just about setting us up for the Rolex. For us, we know the car we have now. Throughout the Roar, we made some developments and gathered more data to hopefully set us up well for next week. That’s the one that counts. We still have some more work to do in order to understand the ABS, the new tire and everything. The guys will have a busy week ahead but I know we’ll come back strong next week. Understanding the racecraft of this category was important. We’re now mixed into a new class with GTD and Am drivers as well. Understanding how they race and how we will interact is useful. It’s a lot harder to get by them now that we have the same BoP, so it will make for a long and interesting 24 hours. It will make staying out of trouble that much more important than years past.”