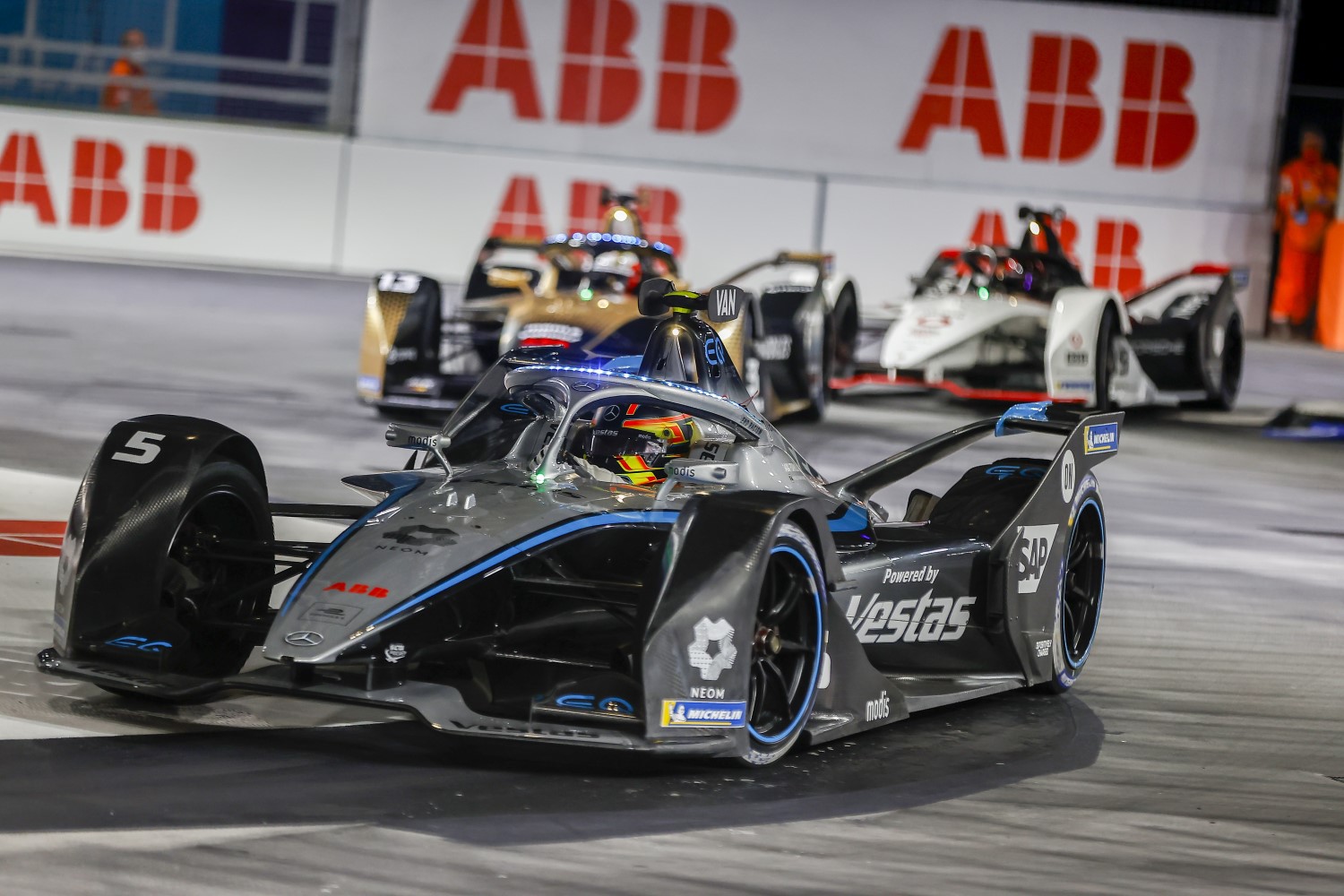 Season 8 of the ABB FIA Formula E World Championship gets underway for the Mercedes-EQ Formula E Team this coming weekend, and for the fourth year in a row, the Diriyah E-Prix will be the curtain-raiser event. Note: See AR1.com Weekend TV Schedule.

As last year, the two races on Friday and Saturday will be held under floodlights. The circuit is 2.495 km in length and features 21 corners. The track runs alongside the historic city walls of the UNESCO World Heritage Site in Diriyah.

Back at the start of Season 6, Diriyah was also the venue for the Mercedes-EQ Formula E Team’s first two races in the all-electric racing series. Stoffel Vandoorne finished third on the podium in the team’s debut race, with Nyck de Vries also scoring points in sixth. One year ago, Nyck secured a maiden Formula E victory by winning the season opener.

This year, the Diriyah E-Prix is again being staged as a double-header with a race on Friday and another on Saturday (start times on both occasions will be 17:03 GMT). New this season, however, is the qualifying format in which the drivers compete in head-to-head duels after a group stage.

Furthermore, the drivers have more power at their disposal as a result of a rule change: the available power in the race increases from 200 kW to 220 kW, and when using the attack mode, the drivers can now call up 250 kW instead of 235 kW.

Comments ahead of the Diriyah E-Prix 2022

Nyck de Vries:
“I’m really looking forward to the first race weekend of this season. Of course, it feels slightly more special coming into this weekend as the reigning Champions. On the other hand, this is a new year, new season and that means that it will be all to play for again – for everyone, not just us. Above all, I’m motivated to start racing again, and I’m ready for this season’s challenges. We will not only face some very strong competition, we will also have to ensure we’re on top of the sporting changes from the start. All in all: I cannot wait to get going.”

Stoffel Vandoorne:
“I am really looking forward to the start of the season. It’s hard to believe that the last race in Berlin is pretty much half a year ago, and it’s been two months since we tested in Valencia. It’s a good feeling to get back to business. After all, racing is something special – it gives you that adrenaline rush, which is the reason why we do it. I’m excited about the prospect of feeling the adrenaline rush and the pressure that comes from working with the team and fighting for good results. I am optimistic about the weekend and about the year as a whole. The track at Diriyah has suited us in the past, and we have been competitive there. In the last two years, Nyck and I have made it onto the podium a few times. I think everything is looking positive, but there are a few new aspects for us to factor in – the new qualifying format, the new rules in the race; let’s see how that turns out. I feel like we’ve done our homework and prepared as much as we can. Now let’s get down to business and see how it goes.”

Ian James, Team Principal:
“This weekend’s Diriyah E-Prix will mark our return to the track for Season 8 of the ABB FIA Formula E World Championship. Last year, our trip to Diriyah brought us mixed feelings; a great first race with a very impressive performance by Nyck and the team. A performance that kicked off our Championship campaign very well, ultimately crucial for last year’s double World Championship win. On the flip side, in the build up to race two we had some reliability issues that led to us having to sit out the qualifying session – although these were quickly contained, and we were able to start the race, albeit from the back of the grid.

We are hoping to add to the positive memories this year. But as I like to approach all new challenges; we shouldn’t take anything for granted. Although last year’s pace and results show how strong this team is, and it has helped us build this team into what it is today, it doesn’t mean this season is going to be an easy one. This season will bring its own challenges. We will be competing against teams who’ve shown their strengths last season – and I do not believe any of them have been sitting still over the break; we will have a proper fight on our hands.

Equally, there are several organizational changes that we have been going through ourselves over the break: we’ve moved all of our operational team over to the UK, have welcomed new team members and this will be the first time this structure has been put to the test in a competitive environment, while dealing with some new sporting regulations.

Having said that, we believe in ourselves and that we have a strong package. We’re ready to bring the fight to the track this season, making Season 8 our best and most memorable yet. Bring it on!”

Ian, what’s the feeling now in the team to be cast in the role of the ‘hunted’ and not ‘hunter’ for the first time in the championship?
Ian James: We’re approaching Season 8 full of excitement and anticipation. We’re all champing at the bit, itching to get started again, but I don’t think our approach is about to change significantly now in terms of moving from being hunters to becoming the hunted. We still face the same challenges as in previous years, and the fact that we won the World Championship last season doesn’t really mean anything as regards next season. We know how close this championship is and just how strong the opposition are. It’s going to be another tough battle to the bitter end.

Will that increase the pressure on the team and if so, how will you deal with it?
Ian James: The pressure is always there, for sure, but when I see the long hours everyone is currently working, I’m pleased to see that a real hunger to reach our full potential still exists within the team. We’ll approach the season with a measure of humility, which we must do, considering how strong our opponents are and how high the probability is that the championship will go to the wire. But pressure is always there, and that’s okay, you know. Pressure makes you stronger. We even welcome it, so we’re really looking forward to the season starting up again soon.

Taking the world championship double out of the equation for the moment, what were the main lessons learned from last season that will make the team even stronger in Season 8?
Ian James: We learned a great deal during Season 7, especially from the challenges we had to overcome. We had a good start to the season but struggled towards the middle, which made us aware that we may perhaps have pushed too hard in a few areas that didn’t get us where we wanted to be. Instead, it put us slightly on the back foot. We’ve learned from that. We can always find the right way forward again provided we can draw the appropriate conclusions from our analysis, be brave enough to question what we’re doing and take a step back in order to change direction. It would be very nice were that to happen again at the end of Season 8. But this is crucial – if we’ve gone down a path that we think won’t work, then we need to hit the reset button and ensure that we make the necessary corrections.

So, does having the ability to adapt play a key role in all of this?
Ian James: Yes indeed. Being able to adapt and have the courage to question things and adapt where necessary are paramount. HPP at Brixworth plus the Formula One and Formula E racing teams in Brackley make for a strong combination.

How does the team benefit from these synergies?
Ian James: We always knew that whatever we managed to achieve would be passed on to the Mercedes-Benz motorsport family, and we can see that as well in our collaboration with Mercedes AMG High Performance Powertrains at Brixworth. All the knowledge that we’ve been able to draw on from the work and development that have taken place as a result of Mercedes-Benz being involved in F1 and the fact that we’ve been able to use it to advance our own learning process in Formula E have been real assets as far as we’re concerned. Hopefully, we can give some of that back through our development work in Formula E so that the F1 power unit can remain as powerful as possible in the future.

I’ve spoken on many occasions about the cultural aspects, if you like, of what we can learn from the success of the entire team here at Brackley. The much-vaunted ‘no-blame’ culture that we have here is also crucial to our success. We are very proud to be part of this family and that has undoubtedly given us the opportunity to accelerate our development and has also contributed to our title win. The synergies that exist in our motorsport family will not only be relevant in the upcoming season but also for the future. The culture and know-how that we’ve built up here will continue to benefit us and form a core part of our organization over the long term.