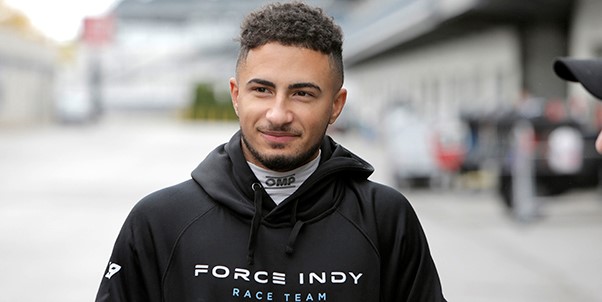 Force Indy has announced its entry for the 2022 Indy Lights Presented by Cooper Tires championship with Ernie Francis Jr. (shown above) driving the team’s No. 99 car.

Haitian American Francis heads to Force Indy after three wins in his lone season in the Formula Regional Americas Championship and a second-place finish in the inaugural season of the Superstar Racing Experience (SRX), with a win at Lucas Oil Indianapolis Raceway Park.

Florida native Francis, 24, is also a seven-time class champion in the Trans Am Series (2014-2020). His 47 career victories are the most of any driver in Trans Am history. His 24 wins in the premier TA category trail only Paul Gentilozzi (31), Mark Donohue (29) and Tommy Kendall (28).

“This is an incredible opportunity,” Francis said. “After getting a taste last year and beginning to learn what open-wheel racing is all about, I found myself wanting more. Open-wheel cars are incredible to drive. To know that I’ll continue my education with Force Indy and only one step away from the NTT INDYCAR SERIES makes this unbelievably special. I cannot wait to get started.”

In December 2020, African American business leader and former racing team manager Rod Reid announced the formation of Force Indy with the focus on hiring men and women of color, including mechanics, engineers, staffers and drivers. During its inaugural season in the Cooper Tires USF2000 Championship, the team won in thrilling fashion at New Jersey Motorsports Park with driver Myles Rowe.

“Being able to finish our first season with a win showed what this team is capable of doing,” Reid said. “We want to thank Myles, who will always be a member of the Force Indy race team, and will continue to offer assistance and mentorship as he pursues another season in USF2000.

“I could not be more thrilled to promote our group to the Indy Lights Presented by Cooper Tires championship with Ernie Francis Jr. His work ethic and history of success speak for itself.”

Team Principal Reid’s years of karting and auto racing experience have proven invaluable. His NXG Youth Motorsports Inc., has introduced more than 2,300 students from under-represented communities, ages 11 to 15, to the educational benefits of the sport.

Team Penske will continue to offer mentorship for Force Indy, as the initiative also falls under Penske Entertainment Corp.’s “Race for Equality & Change” announced in July 2020. The goals include recruiting and developing a diverse workforce throughout all levels of INDYCAR and Indianapolis Motor Speedway, ultimately creating a community that fundamentally transforms the sport.

“I was pleased to learn that Ernie would be driving for Force Indy in 2022,” Roger Penske said. “As someone who has a history in Trans Am, I know the type of skill set that comes from that series. Ernie will be a wonderful addition to Indy Lights.

“It was inspiring to see the growth of Force Indy during their first season, and we will continue to support their progress and mission as the team continues on a path to compete in the NTT INDYCAR SERIES.”

Force Indy will make its Indy Lights series debut Feb. 25-27 on the Streets of St. Petersburg, Florida. The team will continue to use No. 99 on the car in honor of the late Dewey “Rajo Jack” Gatson, who drove a roadster with that number toward the end of his career in 1951. Gatson, one of the winningest African American drivers and mechanics in racing history, never received an opportunity to race in the Indianapolis 500.

“We remain very fortunate to have Team Penske offer its guidance and mentorship,” Reid said. “I have been in and around the sport for 40 years. Force Indy remains a labor of love, and our goals are unchanged: focusing on diversity with an eye toward competing in the NTT INDYCAR SERIES and, in honor of Rajo Jack, the Indianapolis 500.”