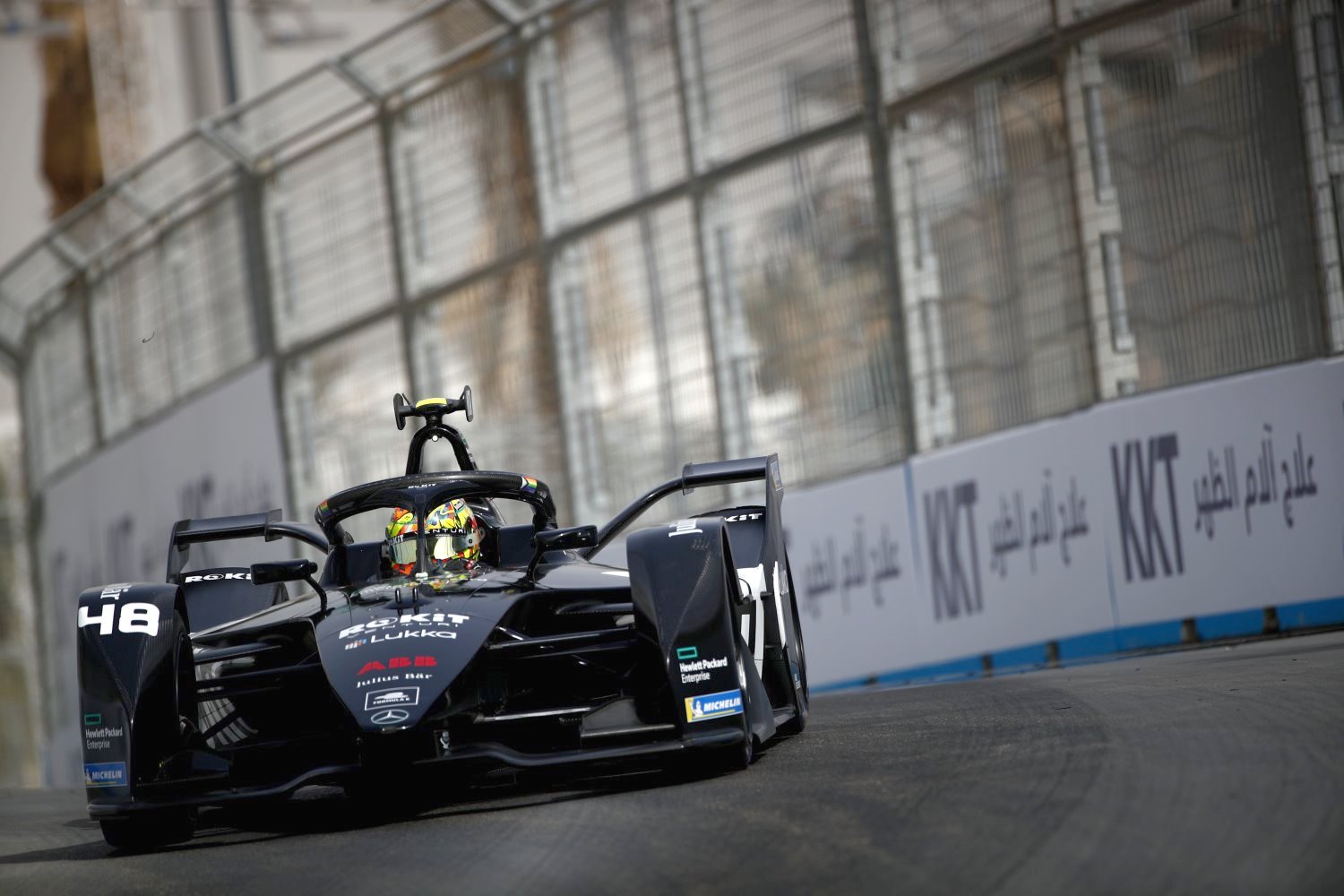 Edoardo Mortara (ROKiT Venturi Racing) led home Robin Frijns (Envision Racing) and his Venturi teammate Lucas di Grassi to seal the race win in Round 2 of the Diriyah E-Prix to cap a storming race for the Monegasque team.

Through the second round of ATTACK MODE activations, di Grassi was able to position himself for a move on polesitter and then-leader Nyck de Vries (Mercedes-EQ) on Lap 16. The Brazilian accelerated around the outside of de Vries at turn 18 and held the position, with Mortara also able make it through.

The Swiss then swept by his teammate for the lead a lap later, and there he stayed, fending off Frijns until the race came to an end behind the Safety Car after Alexander Sims (Mahindra Racing) found the wall.

André Lotterer (TAG Heuer Porsche Formula E Team) made amends after slipping down the order during Race 1 as the German battled to fourth. Lotterer jousted with Jake Dennis (Avalanche Andretti) and Jean-Éric Vergne (DS TECHEETAH) throughout and got the better of the pair, who followed the Porsche driver home.

Stoffel Vandoorne (Mercedes-EQ) stealthily maneuvered from 12th spot into seventh at the flag to claim valuable points from a challenging situation.

Oliver Rowland (Mahindra Racing) fired off the line and back from a pre-race three-position grid penalty to finish eighth, with Pascal Wehrlein (TAG Heuer Porsche Formula E Team) in ninth.

Round 1 winner and reigning champion, Nyck de Vries (Mercedes-EQ) was shuffled down the pack after the Venturis made their way through and following a pass by Vergne which resulted in some close contact. The Dutchman salvaged a point and 10th.

After Round 2 of the ABB FIA Formula E World Championship, Mortara sits four points ahead of de Vries at the top of the Drivers’ standings, while ROKiT Venturi Racing heads the Teams’ running by 11 points over Mercedes-EQ with Avalanche Andretti third.

EDOARDO MORTARA, ROKiT VENTURI RACING,  #48 said: “I would rather have been frustrated in qualy then win the race, then the opposite so that’s fully fine! What a day – especially after the mistake that I made in qualification yesterday. I am very glad to bring this win for the team. A one-three finish is amazing. It was a very strategic race, very difficult for the nerves because I didn’t have a lot of energy but neither did my colleagues around me. They were playing strategy, trying to attack me and make me consume, so I tried to keep my head cool and it worked.”

ROBIN FRIJNS, ENVISION RACING, #4 said: “After a difficult day yesterday, scoring no points, and seeing how quick Mercedes were yesterday we knew it would be a tough job today. I was trying to hang on with the guys and I felt really confident in the car, the guys did a great job, and at the end I finished P2 – I’m over the moon.”

LUCAS DI GRASSI, ROKiT VENTURI RACING, #11 said: “I managed with ATTACK MODE to go all the way to P1, passing Nyck, and then we were in a very conservative strategy. I had more energy than Robyn, he went for the move so I didn’t really understand what was going on at that moment, and then straight after there was a safety car. We were caught by surprise, but the car was mega and it shows we are here to win. We are super competitive, this one-three was not just mine and Edo’s but the whole team’s job so thank you everybody for trusting me to be part of the team – and congratulations.”