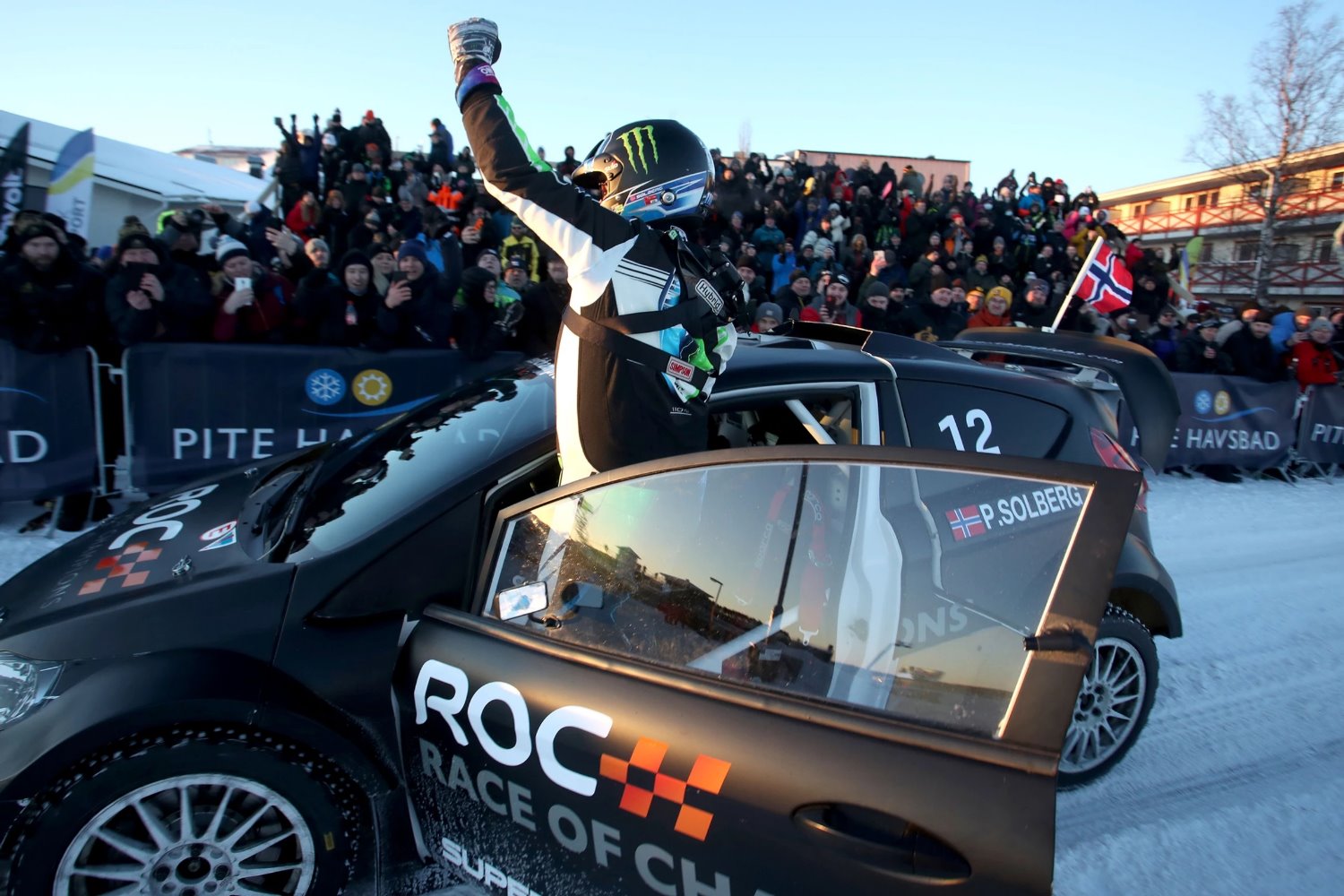 After defeating Team Germany’s Vettel and Schumacher to advance to the 1/4 finals, Team USA’s Colton Herta and Jimmie Johnson made it all the way to the finals only to go down to defeat to Norway’s Petter and Oliver Solberg.

Team Norway’s father-and-son duo of world rally aces Petter and Oliver Solberg are celebrating after they took a stunning family victory in the ROC Nations Cup on the ice of Sweden’s Pite Havsbad.

On a sunny afternoon on the frozen Baltic Sea just 60 miles from the Arctic Circle, legends from the world’s biggest motor sport series teamed up in pairs to battle for national and regional pride. They raced a mix of cars including the FIA RX2e electric rallycross car, Porsche 718 Cayman GT4 Clubsport,100% fossil-free biofuel powered SuperCar Lites and the off-road Polaris RZR PRO XP.

Overnight flooding at Pite Havsbad following an unprecedented tidal surge meant today’s action took place on just the inner half of ROC’s iconic parallel track, which has been purpose built on ice for the first time. The racing adopted a pursuit format similar to one first used at ROC 2015 at London’s Olympic Stadium.

And what a festival of icy action it was – as FIA World Rally and World Rallycross Champion Petter Solberg and his rising WRC star son Oliver Solberg prevailed in the final against the might of Team USA.

In the first heat Petter beat off the challenge of seven-time NASCAR Cup Champion Jimmie Johnson, who suffered a mechanical problem. Oliver then defeated IndyCar’s youngest race winner Colton Herta before he jumped straight into the Porsche for the next heat – with four-time F1 world champion Sebastian Vettel in the passenger seat.

That’s when Johnson hit back with a win of his own, forcing the match into a fourth heat. But Petter struck the decisive blow with victory over Herta, sealing the ROC Nations Cup final for Team Norway.

Afterwards, a delighted Petter Solberg said: “It’s unbelievable. I got my motivation when I saw Sébastien Loeb winning the Monte Carlo Rally last month and I thought: ‘it can’t be so difficult.’ So I was so ready for this race – and to do it together with Oliver is a big dream.

“The Race Of Champions has been so special for many years. It’s so much fun to be with all these guys: everyone has had so much success in their careers yet they are so friendly. Oliver has been flying around like a yoyo all week because he’s been so excited. When you are 20, that’s how it is. So I must say thank you to Fredrik, Jessie and everyone working behind the scenes. It’s a fantastic atmosphere and I’m very thankful to have a chance to come here.

“The conditions out there were hard for everybody today, but the race organizers did a brilliant job to find a solution. On the snow you get a slushy feeling, like floating. So it’s about not making mistakes. I was nervous about racing with Oliver but when you can do something like this with your son and see the happiness when he does well, it’s great. He did a very good job, and actually raced better than me. But by the final I was really pumped up. Jimmie’s run in the Porsche was very impressive and I knew I had to be at my best to beat these guys, but we did it.”

Oliver Solberg added: “This is crazy! I’m shocked because doing this together as father and son is very emotional. We had fantastic teamwork, and it shows we work well together. It’s been a dream come true to come to the Race Of Champions with all the legends who I look up to, like Jimmie. There are so many stars here and so much experience to take in. They’re all so humble and nice to me so it’s been a fun time, then when we come to the track it’s serious.

“Today I was only really happy with one run, my race against Johan Kristoffersson. I knew he was fast in the Porsche so that was my most nervous moment, but I had a perfect run and I beat him. Then I tried to drive the same against Jimmie, but he was much faster than me. I had Sebastian Vettel in the car with me, so I thought: ‘If I don’t win I’ll look stupid.’ Then I lost. So I need to find some more speed for tomorrow, but it’s been an awesome day and it’s fantastic to be standing here at the end.”

Beaten finalists Team USA also had a fine afternoon’s work, but they narrowly missed out on bringing home the trophy.

Jimmie Johnson said: “The Race Of Champions is such a special event because you switch between different cars, so no one is very comfortable. You have to forget the experience and try to tackle what’s in front of you. On the start line I tried not to think about who I was racing, I just tried to stay within my means, be smart and drive the car. If you get through the rounds you have a chance to go up against amazing guys, and to see names like Vettel and Schumacher is mind-blowing. So a huge thank you to Fredrik, Jessie and their passion to bring us all together.

Who would’ve thought two Californians would get a trophy in ice racing! Big congrats to team Norway for their first @RaceOfChampions win! #USA pic.twitter.com/nCKGj9qJxg

“Earlier we had a call from Travis Pastrana, who would have been racing for Team USA today until his accident last month. He was watching with a group of friends at 5am in the States. He told us we’d go all the way, and we nearly did it. All the other drivers here have been really friendly and helpful too, offering us advice. But until you can actually sense the feel and grip and how a four-wheel-drive car helps pull you round the turn, it doesn’t stick. So every lap has been making us better. Now after today I’m not so sure we’ll be given any more tips…”

Colton Herta added: “Our original goal was not to get knocked out in the first round, so when we won that we were jumping up and down and celebrating like we’d won the whole thing! Certainly nobody could have thought we’d make it to the final. But we had a plan, we stuck to it and here we are. It was awesome to race against these guys, and particularly the Solbergs in the final. The conditions weren’t too bad today, depending on which car you were driving – but maybe we’re not experienced enough to know when conditions are good and bad! Our approach was just ‘Send it and see what happens…’”

Because the track conditions on snow and ice can change quickly depending on the weather, ROC’s traditional group stage did not take place. Instead this year’s ROC Nations Cup used a straight knockout system. To make it as fair as possible, races were decided over four heats, with each driver racing against both drivers from the other team. For matches tied 2-2, the team with the best total time made it through.

Team Finland’s Mika Hakkinen and Emma Kimilainen did well to make it all the way to the semi-finals, before they were finally defeated 3-1 by Team USA. Double F1 world champion Hakkinen did take a solitary win but it was not enough to progress.

Team Nordic (‘Mr Le Mans’ Tom Kristensen and World Rallycross champion Johan Kristoffersson) also reached the semi-finals. They both won a heat in an exciting 2-2 draw with Team Norway before they were beaten on a count back of fastest times

There were some huge stars of global motorsport who went out in the quarter-finals, including the might of Team Germany (Sebastian Vettel and Mick Schumacher) who were defeated by Team USA on a countback of fastest lap times after a 2-2 draw.

Another casualty at this stage was Team GB’s David Coulthard and Jamie Chadwick, who fell to Team Finland. All four drivers won a race apiece for another 2-2 draw but Hakkinen had the last say by beating his old McLaren F1 team-mate Coulthard in the final heat, with enough of a margin to go through.

Team France’s pair of World Rally Championship legends Sébastien Loeb and Didier Auriol fell to a 3-1 defeat by Team Nordic, despite a win for Loeb over Kristensen.

To the dismay of the home fans packing the venue, Team Sweden’s Mattias Ekström and Timmy Hansen also went out in the quarter-finals. They were beaten 3-1 in an all Scandinavian battle with Team Norway, even though Ekström did take a consolation win against Oliver Solberg.

The afternoon’s action began with two Round 1 play-offs. Team Latin America (Helio Castroneves and Benito Guerra) were the first team to go out after a tight battle with Team USA. Reigning ROC Champion of Champions Guerra won both his races as it finished 2-2, but they went out on a countback of fastest laps.

Team eROC All Stars (Jarno Opmeer and Lucas Blakeley) were the other pairing to bid an early farewell after a 3-1 defeat by Team Germany. But that was not before Blakeley gave himself a story that should earn himself free drinks for life in the pubs of Scotland by defeating Vettel in his first ever race.