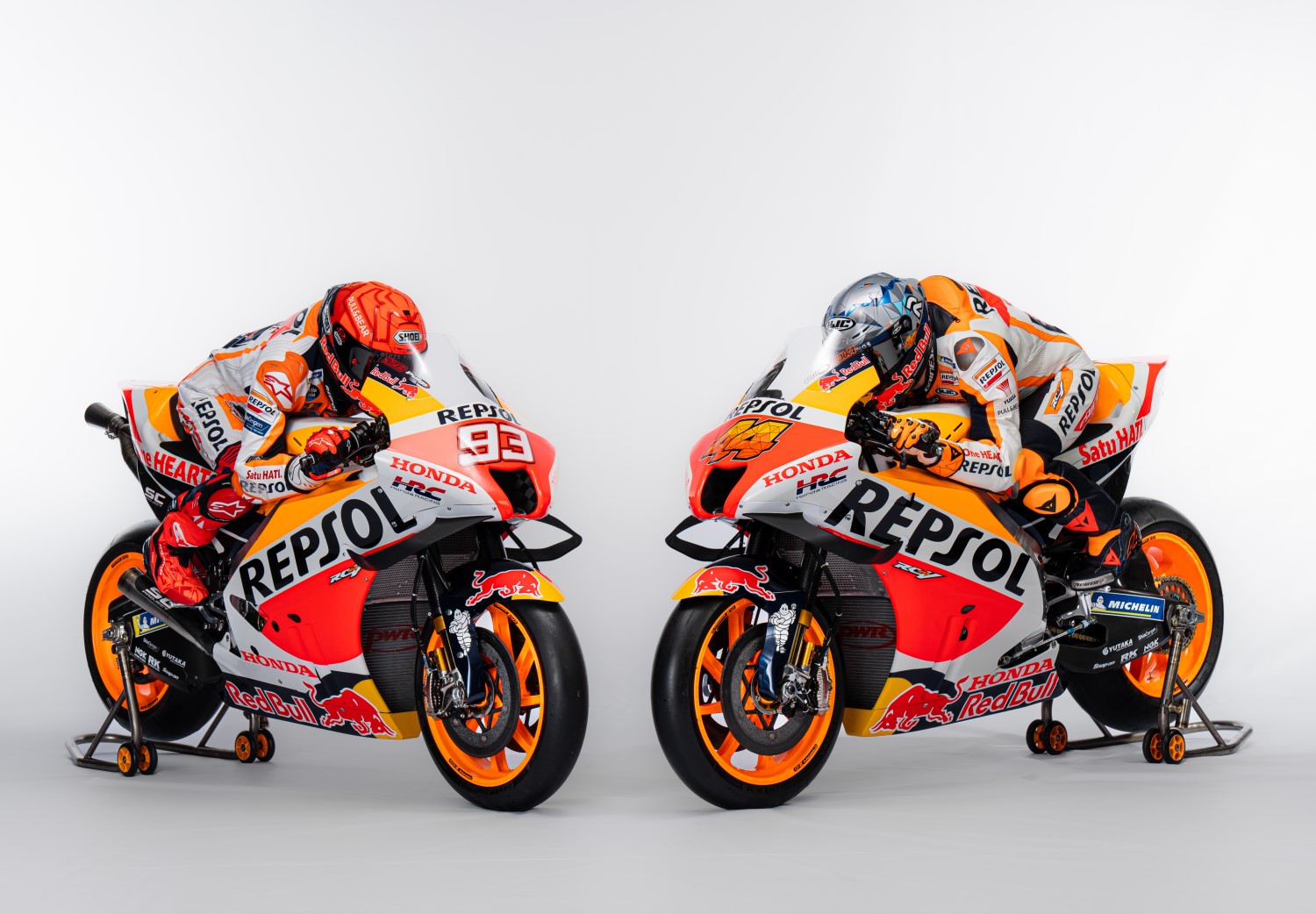 Marc Marquez and Pol Espargaro launch the 2022 Repsol Honda Team livery as the start of a new season rapidly approaches.

The 2022 season begins with renewed motivation for the Repsol Honda Team. Despite experiencing hardships both on and off the track during 2021, there have been incredible highs and moments of celebrations in the last 12 months including a pole position, three wins and five podiums in total. 2021 saw the triumphant return to competition for Marc Marquez, returning to winning ways 581 days after his last win and Pol Espargaro achieved his best MotoGP race result and earned his first pole position on board the RC213V.

Marc Marquez begins 2022 fully recovered from the diplopia which ended his 2021 campaign early. The last two injury-hit seasons have not quelled his hunger and the eight-time World Champion is as determined to fight for the title in his tenth season with the Repsol Honda Team as in his first season. Since stepping up to the premier class in 2013, Marquez has earned six MotoGP World Championship titles, won 59 races, finished on the podium 99 times, and earned pole position on 62 occasions – all with the iconic Repsol Honda Team. All of these are numbers which the #93 is aiming to increase in 2022.

Pol Espargaro enters his second year with the Repsol Honda Team after a learning year in 2021. A pole position at the British GP and achieving his best finish in the premier class to date with second place at the Emilia Romagna GP were undoubted highlights of a year full of steady and consistent progress and growth for the 2013 Moto2 World Champion. Continuing to improve and fight in and amongst the leading riders at each race remains the #44’s goal for this new season as he aims to bring further success to the Repsol Honda Team.

Honda HRC celebrate their 40th anniversary in 2022 and it is a year of change. Alongside a new logo, Honda’s four-wheeled competition efforts have been brought under the iconic HRC banner. A revised livery adorns a heavily updated 2022 Repsol Honda Team RC213V – the machine a new concept from Saitama as they aim to return to their position at the top of the motorcycle racing world. New aero dynamics have been designed to complement the revised chassis and upgraded engine for 2022.

2022 marks the 28th year of collaboration between Honda and Repsol, the iconic colors a consistent sight at the front of the MotoGP World Championship grid since 1995. With 15 World Championships, 452 premier class podiums and 183 race wins, the Repsol Honda Team remains the most decorated team in Grand Prix racing and the reference point in two-wheeled motorsport.

With a successful test in Sepang, Malaysia already under their belts, Marc Marquez and Pol Espargaro are now preparing for a new challenge at the Mandalika Circuit in Indonesia with the Repsol Honda Team. Both riders will have three more days of riding before the 2022 MotoGP World Championship begins at the Losail International Circuit, Qatar on Sunday, March 06.

“Ten seasons already in MotoGP and ten seasons in the Repsol Honda Team is a dream. I mean it’s something I couldn’t imagine in my best dreams, of course also during these ten years we have achieved very good results, so for sure this is something special and I want to enjoy it. I know we will try to win the title to celebrate it well! My goal this year is to try and fight for the championship. We have started the season well already in Malaysia and now we prepare to head forward to this test in Mandalika and continue our preparations.”

“I approach this season with more experience which at the end is one of the most important things in MotoGP. We have just five days of testing and knowing already how the team is, how the bike is, what I’m going to find there is already something very important, very big. You know through the year with a new bike we are going to improve it and make it even greater, but I think that the beginning point is great, and I think that from Qatar on we will feel ready to fight for something great which is our target. Let’s keep working now in Indonesia.”

“I think it is the biggest change we have seen during the current regulation period. The concept of the 2022 machine is ‘break out of our shell’ to improve the performance so the whole of the machine is completely different from the last two years. We changed the engine, chassis, and the electronics with this concept. We already applied this new concept from the last year, and we have already checked the performance of the new machine concept and we could confirm that it works to improve our weak points. So, this 2022 machine has further evolutions with the same direction.

“Our target is always the same: winning the championship. But with this championship we always try to get first and second, that is our target with Honda riders.”

“We are facing this season with great optimism and confidence, with all the human and technical capabilities to be one of the best teams of the championship. Fighting for excellence is part of Repsol’s DNA as a company, as it is for our partner HRC. Therefore, Repsol’s MotoGP sponsorship responds to a clear decision to use the most demanding competition as the best test bench to improve our products: our fuels and our lubricants.

“We are really excited with the season that begins and with what Marc can achieve. Even with everything new to him, Pol had excellent results such as pole position at the Silverstone GP or the fantastic podium at Misano, rounding out a Repsol Honda double victory with Marc Marquez. I would like to finish by wishing the Repsol Honda Team the very best for this season which is sure to be an exciting one where Repsol and HRC will continue to be two of its great protagonists.”