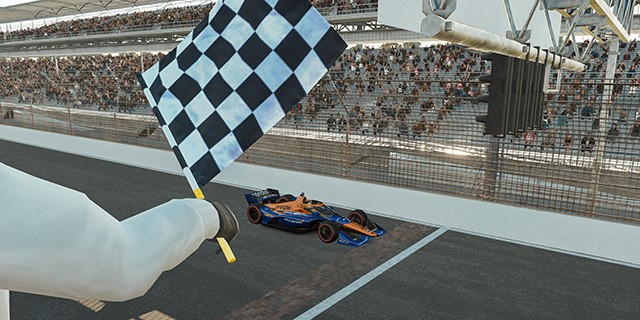 If the virtual world is a mirror of the real thing, Felix Rosenqvist may be poised for a big rebound in the 2022 NTT INDYCAR SERIES season.

The top three finishers received donations to a charity of their choice, with Rosenqvist winning $10,000 for Conquer Paralysis Now, Malukas $8,000 and Karam $5,000. Marcus Ericsson of Chip Ganassi Racing earned $2,500 for charity in an entrant lottery among the remaining finishers in the 20-car field.

“It’s always that vibe between the drivers when we have these (virtual races),” Rosenqvist said. “We all say that we don’t take it seriously, but I definitely did. Today I think I spent the last five or six hours in the simulator. You want to do well.

“It was fun. It’s always nice in this part of the season to get a little action going between the same names you’ll be fighting in the real season and take the rust away a little bit from the months of the offseason.”

The race was the first official esports event between Motorsport Games and INDYCAR, with racing taking place on the rFactor 2 PC platform. The event was streamed live on INDYCAR’s YouTube channel and Facebook page.

Rosenqvist started second in the feature after combined points scored in two 10-minute heats set the starting grid. Karam, who won the second heat, took the lead from the pole at the start and extended his lead to two seconds while Rosenqvist and Malukas had a fierce side-by-side duel for second with about 16 minutes remaining.

With 11 minutes left, Rosenqvist dove under Malukas in Turn 1 to take second place and set his sights on Karam, whose tires were losing grip due to his torrid early pace. Rosenqvist cut the gap to Karam to just three-tenths of a second with about nine minutes, 30 seconds to go, trimming huge swaths of time from Karam in every corner.

It didn’t take long for Rosenqvist to dispose of Karam and take the lead for good. He passed Karam on the outside of Turn 7 at the end of the back straightaway with nine minutes, 17 seconds to go.

The event was part of an exclusive agreement reached in July 2021 between INDYCAR and Motorsport Games, a leading racing game developer, publisher and esports ecosystem provider of official motorsport racing series throughout the world. The partnership will produce a virtual series and an INDYCAR video game expected to launch in 2023 on PlayStation, Xbox and PC.