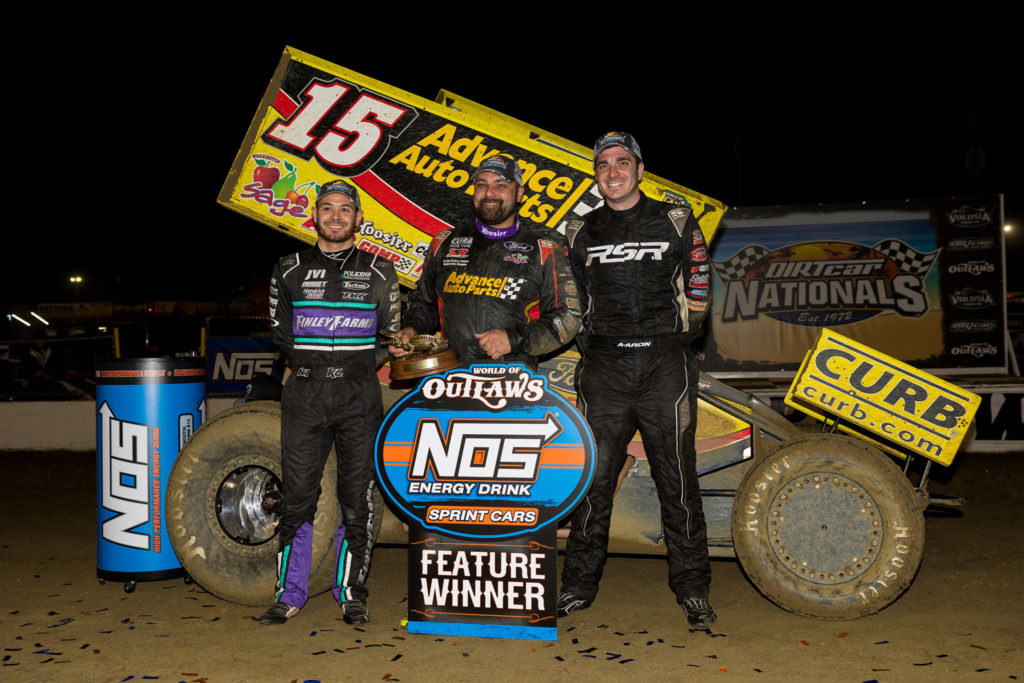 The box score will show Donny Schatz led all 25 laps of Thursday’s season-opening affair at Volusia Speedway Park, but it was anything but a snoozer as he methodically maneuvered the challenging 1/2-mile and had to fend off reigning NASCAR Cup Series champion Kyle Larson on the final restart.

Speaking on the surface, Schatz offered a one-liner to the roar of the crowd as he noted “I’d rather land on the other side of the fence than run second.” It almost felt like a rejuvenated Donny emerged from the cockpit, especially so with his personal favorite yellow scheme back on the #15.

In the end, Schatz’s symbolic win is like a light at the end of the tunnel when it comes to the tedious task of researching, developing, and mastering the Ford Performance Stewart 410 engine. After a rollercoaster process of getting this program off the ground, the FPS410 appears more reliable and more powerful than ever.

For the 44-year-old native of Fargo, ND, it was another night to pad the stats as he secured his 303rd career win with The Greatest Show on Dirt with 14 of those coming in World of Outlaws action and 24 in total under the DIRTcar Nationals banner.

“It all starts with night one and you really need to get that first win out of the way as soon as possible,” Schatz said after his fifth career season-opening victory. “Starting on the outside was a blessing for us with the way it rolled out. I didn’t want to run down in the rough stuff, but there at the end I knew I had to if I wanted to win.”

“It’s been a big change,” he detailed on the continued expansion at TSR. “These guys have never lost focus, though, and I think we’ve been showing how much better we are. One of the parts about this sport that still drives me is our partners, they’re always by our side win or lose. It makes it more special when we deliver the wins they deserve.”

There will be no waiting in 2022 as @DonnySchatz and @TonyStewart_Rcg win right out of the gate!

The @FordPerformance, @AdvanceAuto, @Carquest #15 leads all 25 laps of the season opener, but not without fending off @KyleLarsonRacin on the final restart. pic.twitter.com/uBvVOyjtxw

Chasing Schatz to the stripe on Thursday night was Kyle Larson of Elk Grove, CA aboard Paul Silva’s Finley Farms, HendrickCars.com #57. The Hendrick Motorsports superstar advanced from sixth to second and cleared Schatz with a Lap 26 slidejob, but didn’t have enough to hold off the #15 as they raced wheel-to-wheel down the backstretch.

Finishing 1.542-seconds behind, the 24-time World of Outlaws winner earned his 16th runner-up result with the Series. It was the seventh time that Larson fell short against Schatz – more than double any other driver – and also meant his winless record at Volusia Speedway Park will extend at least one more race.

“It was elbows up,” Larson said with a smile. “I think growing up in California really paid off for me tonight because I’m used to seeing choppy tracks with ruts and being forced to get up on the wheel against some aggressive character. I three what I had at Donny, but I think we needed lap traffic maybe. It was a fun race, hopefully we can be one spot better tomorrow.”

Closing out the podium was Aaron Reutzel of Clute, TX, who put together a stellar season-opening bid for the Ridge & Son Racing #8 team. With a new Mobil1 partnership and the Toyota Racing Development 410 engine under the hood, A-Aron started the night in perfect fashion.

“What a great start for this team,” Reutzel happily mentioned. “I knew Donny wasn’t going to duck in behind me, and that was my fear of losing the lead at the start. I thought I was coming at one point in lap traffic, but then I started fading as the fuel load fell off. Once Kyle got me it changed the race for us. We’ll take what we learned and hopefully get up there on top tomorrow.”