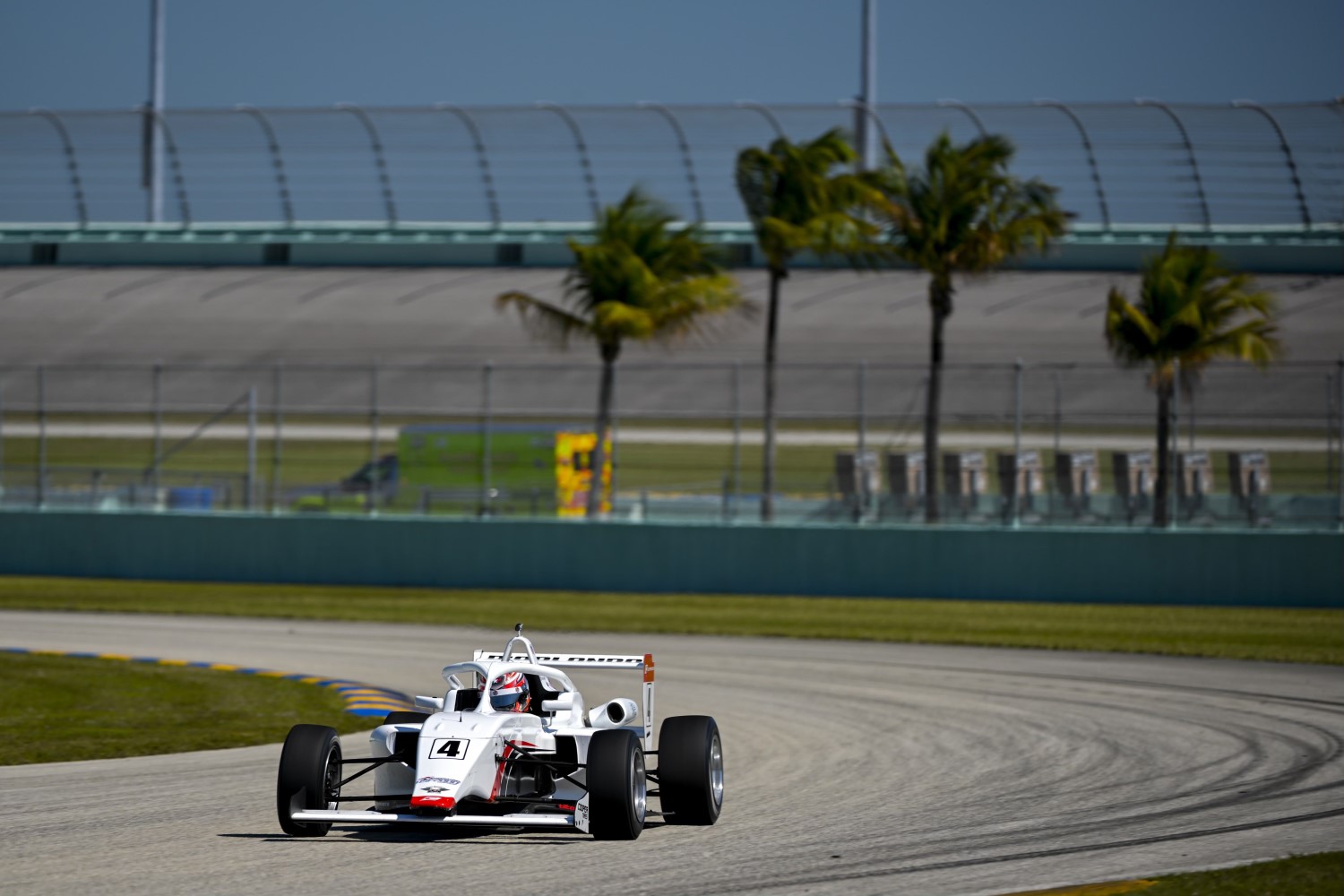 The first of two on-track days that will comprise the traditional Road to Indy Presented by Cooper Tires “Spring Training” pre-season test concluded this afternoon at Homestead-Miami Speedway. Teams and drivers competing on the initial step of the world renowned open-wheel driver training ladder, the Cooper Tires USF2000 Championship, took center stage on the 2.21-mile, 14-turn road course, with Michael d’Orlando, from Hartsdale, N.Y., posting the fastest lap of 1:23.893 for an average speed of 94.835 mph at the wheel of his Cape Motorsports Tatuus USF-22.

The USF2000 competitors took advantage of four 45-minute sessions in ideal weather conditions and will now commence final preparations for the opening two races of the season a couple of hundred miles to the north at the St. Petersburg Grand Prix on February 24-27.

Drivers on the next level of the three-step ladder, the Indy Pro 2000 Championship Presented by Cooper Tires, also completed two sessions during the first of what for them will be two days of testing. Wyatt Brichacek, from Johnstown, Colo., ended the day with the fastest lap, 1:20.250, an average speed of 99.140 mph, for last year’s championship-winning team, Jay Howard Driver Development, after a total of 90 minutes of running. Brichacek edged out teammate Braden Eves, from New Albany, Ohio, by 0.145 of a second during the morning session.

Today’s test provided the first public appearance of new Tatuus chassis’ featuring the very latest safety enhancements, including Halo-type devices that will be introduced into competition this year for each of the first two rungs on the Road to Indy.

Different drivers topped the timing charts in each USF2000 session, although slightly cooler conditions during the morning ultimately provided what were to remain as the fastest times for most of the 18 contenders. After finishing the 2021 season second in the championship standings, d’Orlando continued to display his strengths by turning the fastest time of the day, edging rookie Cape Motorsports teammate Jagger Jones, from Scottsdale, Ariz., by just 0.034 of a second. They were the only two drivers to dip below 1:24s.

“Today went quite well,” said d’Orlando. “It started off with a nice cool track in Practice One; everyone knew the track was going to be fast so we put on some new tires and just put a blistering lap down, a 23.8, which is almost the fastest time the Capes have ever recorded on this track, so I’m quite happy with it. We did a couple of longer race sims later in the day, which went well, so overall the day has been fantastic. I love the car, I love being back with the Capes and my new teammates Jagger (Jones), Jackson (Lee) – the two Jays – and Nicky Hays, so today’s been a fantastic start to the new race season and I can’t wait to take this energy to St. Petersburg.

“There is a lot of pressure there, but (this is) my third year in USF2000 and obviously I’m going to go for the championship. I was close last year – I was the only one that could have won it at the last race weekend and I’m going for gold, shooting for the stars.”

Thomas Nepveu, from Oka, Que, Canada, ended the day third fastest with a time of 1:24.224 for DEForce Racing, which guided Brazil’s Kiko Porto to the 2021 championship crown.

The fourth best time was turned by rookie Yeoroo Lee, from Paramus, N.J., who was fastest in the final session of the day at 1:24.341 for Jay Howard Driver Development.

Another rookie, Jacob Douglas, from Christchurch, New Zealand, completed the top five on the day at 1:24.364, mere fractions ahead of Exclusive Autosport teammate and fellow countryman Billy Frazer.