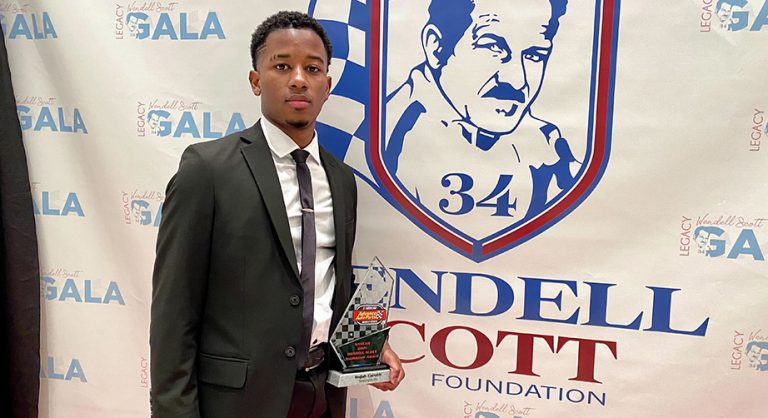 Rajah Caruth accepted the 2021 Wendell Scott Trailblazer Award at the Wendell Scott Legacy Gala on Saturday night at the NASCAR Hall of Fame.

Each year, the award honors a young minority or female driver in the NASCAR Advance Auto Parts Weekly Series who is breaking barriers and paving a unique way up the sport’s ladder.

“To have the support of the Scott family, it’s a lot of responsibility to receive it,” Caruth told NASCAR.com. “I mean, it’s only year four for me, so it means a lot. I’m excited to add to that legacy and do what I’m supposed to do on and off the race track.”

This year, the 19-year-old from Washington, D.C. will run the full ARCA Menards Series schedule. He will also compete in select NASCAR Xfinity Series races driving for Alpha Prime Racing, with the first scheduled for April 2 at Richmond Raceway.

Caruth’s goals are lofty in the ARCA Menards Series where he hopes to compete for the overall drivers’ championship. As for his first efforts in the Xfinity Series, he’ll look to conserve equipment, gain experience and earn top-15 runs in the process. The nerves of a massive season for his career haven’t set in yet, but Caruth knows they will be unavoidable.

“I mean, race day, obviously you get nerves,” Caruth said. “If you don’t get them, it means you don’t care. None right now, but once we start getting closer to Richmond, it’s less than two months away now that I think about it, the nerves will get crazy once it gets closer. Just going to do what I’m supposed to do and have a good run.”

“We couldn’t be more proud of the success that Rajah’s had in his development,” Brandon Thompson, NASCAR’s Vice President of Diversity and Inclusion, told NASCAR.com. “Him winning the Wendell Scott Trailblazer Award was really just the next natural progression in his development as a driver. What he was able to do over the past couple of years in the weekly series, to be able to notch four wins coming right out of a racing simulator, essentially, is huge.”

As Driver for Diversity alumnus Bubba Wallace continues to ascend in the NASCAR Cup Series following his first career victory at Talladega Superspeedway last season, Caruth is making a name for himself in his own right.

“We talk about Bubba Wallace and what he’s done, but for someone to be a direct reflection of Bubba and start to make their ascent in the sport at the same time as Bubba is on the course of reaching his prime is really important for us,” Thompson said. “It adds depth to the system.”

The Wendell Scott Foundation Legacy Gala focuses on raising public awareness and large corporate and individual donations to support students through the foundation. This year marked the fourth annual event, which was moved from Danville, Virginia to the NASCAR Hall of Fame for the first time.

Backed by a number of corporate sponsors, including NASCAR, the foundation raised money through a live auction, which included a number of NFTs featuring a digital edition of Scott’s Jacksonville 200 trophy commemorating his historic victory on Dec. 1, 1963 at Speedway Park in Jacksonville, Florida. The trophy was originally awarded to Scott’s family during pre-race ceremonies at the 2021 Coke Zero Sugar 400 at Daytona International Speedway.

“For NASCAR to be able to support the Wendall Scott Foundation and all they’re trying to do for the lives of youth in the community is exactly where NASCAR wants and needs to be,” Thompson said. “We couldn’t be more proud to support the Wendell Scott Foundation and their efforts and also honor the Hall of Famer, Wendell Scott, and all he did to move the sport forward.”