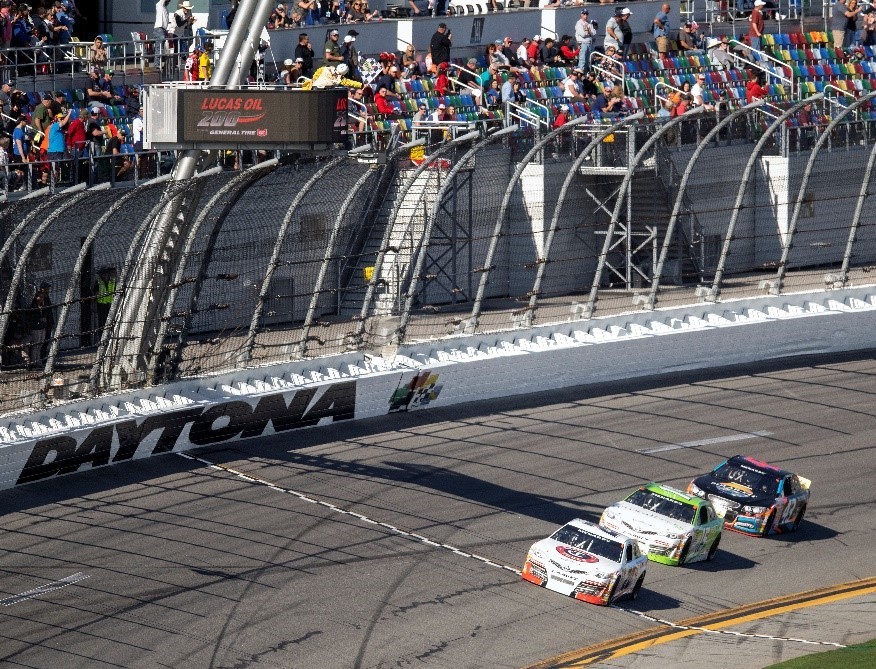 Last year, Heim and his team opened the season with a superspeedway victory when he won the race following an overtime restart. While it was not technically an overtime finish this time, the 2022 Lucas Oil 200 Driven By General Tire ended with a restart on the final lap. And once again, Heim wheeled his No. 20 Crescent Tools Toyota for Venturini Motorsports to the checkered flag.

“My team made it easy on me,” Heim said. “I had great teammates with me the whole way. Venturini Motorsports — the most organized team out here. Toyota Racing has helped me get here, Crescent Tools … It just all came together for this race, and it worked out.”

The teammate who spent the majority of Saturday’s race pushing Heim was Parker Chase, who finished second, a new career high in the ARCA Menards Series.

Chase was on Heim’s bumper as the two crossed the finish line.

“The objective here today was to have a Venturini car win, and we succeeded at that,” Chase said. “Five in a row for Venturini, which is incredible. That’s what we came here to do.”

A stalled car brought out the final caution of Saturday’s race with four laps to go, setting up the final-lap restart. Drew Dollar, who was driving the No. 18 Lynx Capital Toyota for Kyle Busch Motorsports, crashed hard on the backstretch during the final lap before the leaders drove on to take the checkered. Dollar was evaluated in and released from the Daytona infield care center.

“To finish third, with us points racing this year, I think there were 36 cars in this race — to be in the top five and finish third clean is a great start to our year,” Dye said. “I’m just proud to be here and part of this GMS team.”

Speedweeks Presented By AdventHealth culminates Sunday with the 64th running of the DAYTONA 500, which is sold completely out. The Great American Race is set for a 2:30 p.m. ET start (FOX, FOX Deportes, MRN Radio and SiriusXM NASCAR Radio).