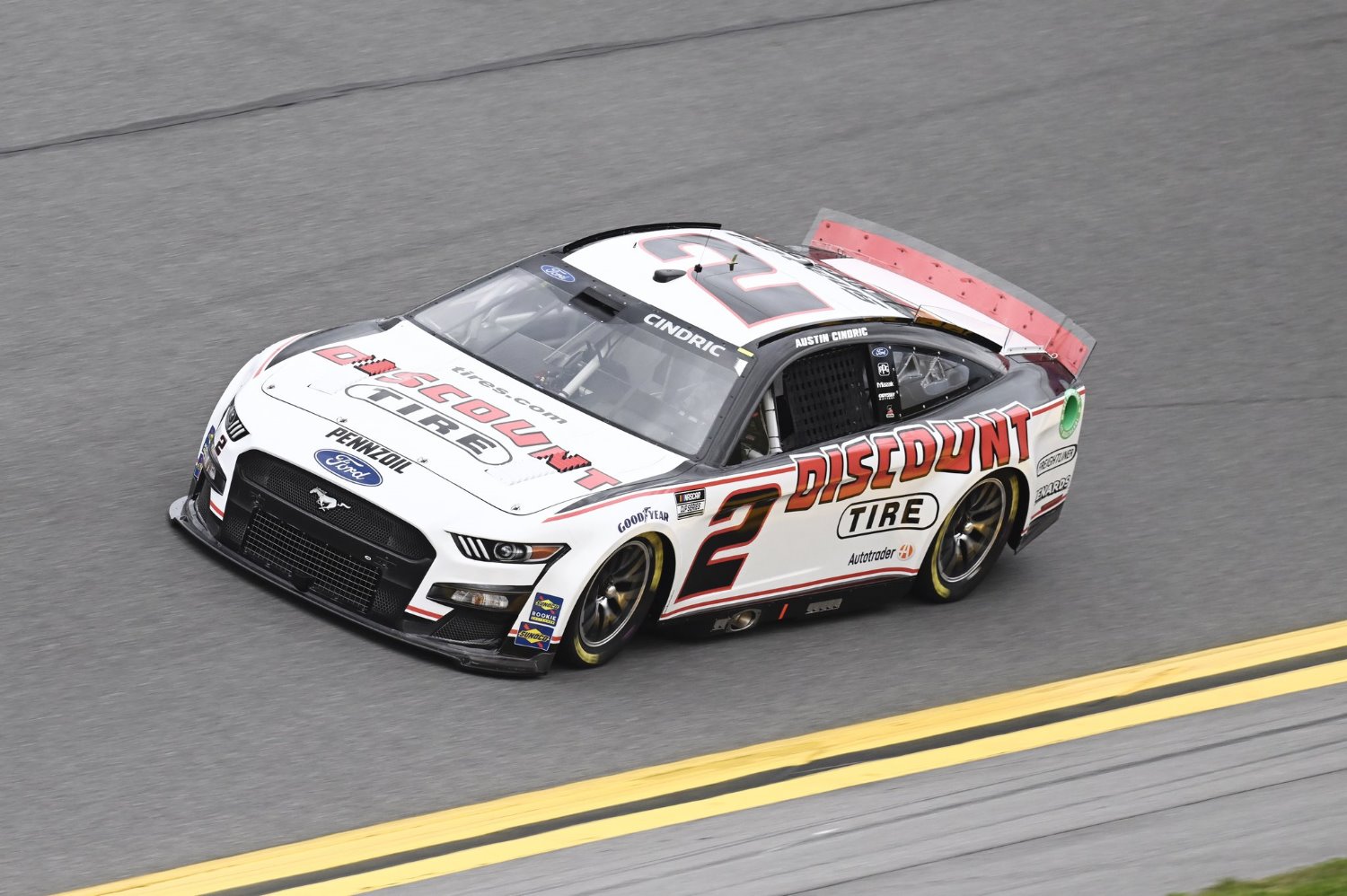 Kyle Busch wore a shirt earlier this week that read “The Most Expensive Day of the Year” referring to all the wrecked cars that go home after every NASCAR Daytona 500 and this year’s race held true to form. 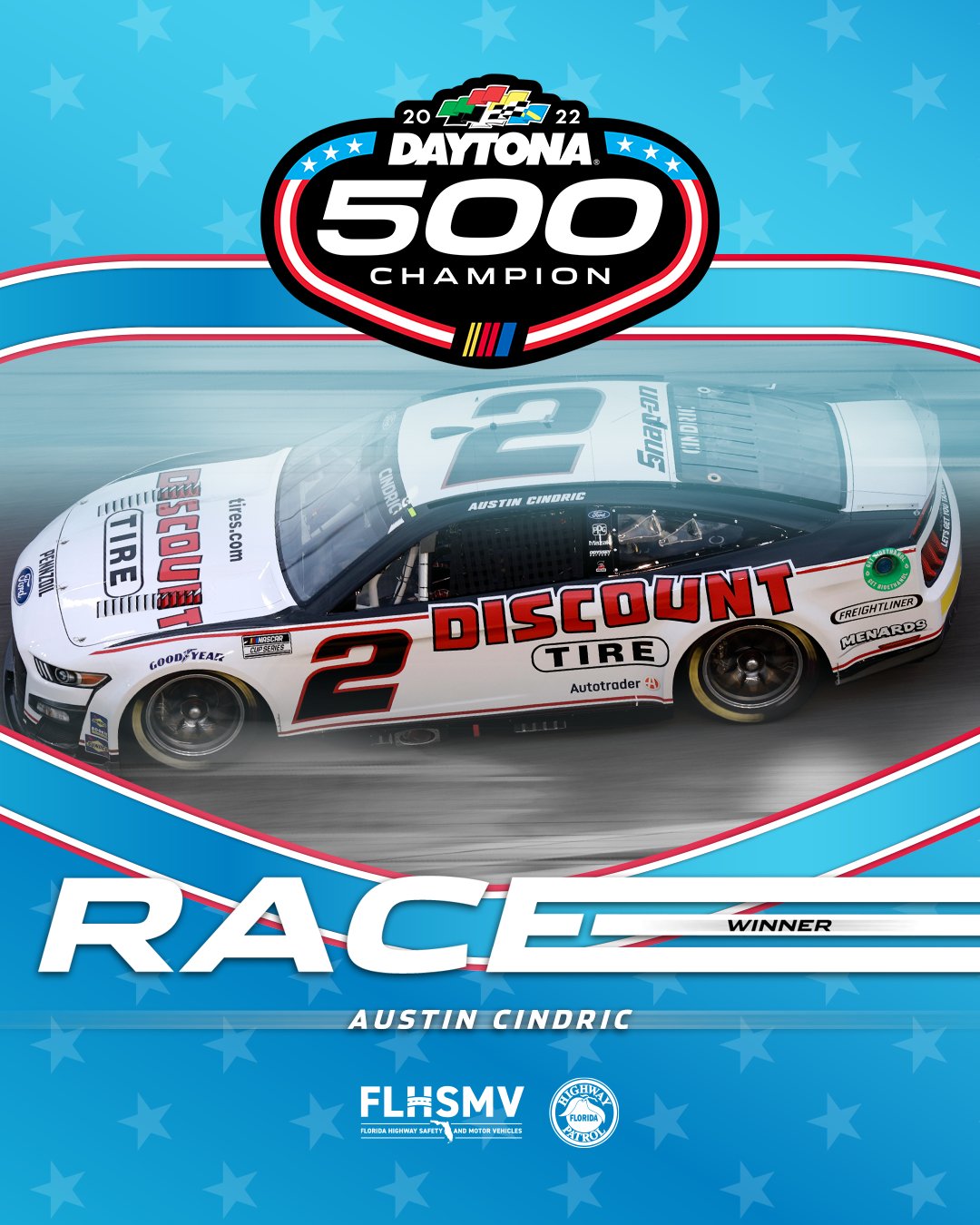 Cindric blocked teammate Ryan Blaney on the outside out of Turn 4 coming to the checkered flag. Blaney made contact with Cindric and hit the outside wall, sealing the No. 2 driver’s fate to claim his first career Cup Series victory in the Great American Race.

“Oh, my God—do you know what makes this even better? A packed house,” Cindric exulted after climbing from his car. “A packed house at the Daytona 500. “Oh, my God, I’ve got so many people to thank. First and foremost, Roger Penske. Happy Birthday!

“Everyone has worked so hard on this Next Gen car and through the whole process. I am so excited. This makes up for losing a championship in the last race I was in (2021 Xfinity Series season finale at Phoenix Raceway).

“I’m surrounded by great people, that’s all there is to it. I know there’s going to be highs and lows, being a rookie. I’m just grateful for the opportunity and excited to climb the mountain ahead of us on the No. 2 team. We’re in the Playoffs—that’s one box checked. My gosh, what an awesome group of fans; what an awesome race car. I’m just really thankful.”

“Yeah, first of all, that’s pretty damn cool to win the 500 in I think the first attempt, maybe not. But full season for him, so congrats to Austin.

“What could have been, right? Man, need to talk about some happy stuff here. Just dejected, but the thing that keeps me up is just the hard work that we put into our speedway stuff and the hard work from everybody at 23-11, proud of them, can’t thank them enough.

“I knew this was a big move last year for me to go out and be competitive, and we’re showing that.

“It’s always the first race of the season and you’re getting through everything, but when you come out of the gates like that, it’s empowering, it’s encouraging. So thanks, everybody, back at the shop, McDonald’s, almost got them another one, back-to-back superspeedway wins. That would have been awesome, especially with it being the 500. But just short.

“I thought our Toyota teammates did good work until they got picked off 1, 2, 3 throughout the race, so we just had to survive.

“Great Speedweeks, though. We’ll come home second. I’m going to be pissed off about this one for a while. I was happy on the first second place we got a couple years ago. This one sucks when you’re that close, but all-in-all, happy for our team, happy for our partners, and on to California.”

As predicted, Ford was going to win this race as they brought the most HP this year.  A disappointed Bubba Wallace came home a close 2nd in his #23 Toyota with the Fords of Chase Briscoe, Ryan Blaney and Aric Almirola rounding out the top-5.  It was the second time Bubba Wallace finished 2nd in the Daytona 500.

For Team owner Roger Penske it was his 5th Daytona 500 win with five different drivers.

For rookie Cindric it was his first Cup win, and it comes in his 8th Cup race start.

A PHOTO FINISH IN THE #DAYTONA500!

Kevin Harvick got caught between Landon Cassill in the No. 77 and Kyle Larson in the No. 5, causing Harvick and Larson to spin into multiple drivers on Lap 191 setting up the next to last caution.

“It’s disappointing,” said Larson who was saving his car for the end. “I had a run there on the No. 4 (Kevin Harvick). I didn’t realize how close he was to the No. 17 (Chris Buescher). I got to him right as he was getting to him and it got him out of shape. I hate that I did that. It’s so hard see in front of him, especially on the straightaway like that.”

“I didn’t realize how close he was to him and it just got him all jacked up. I hate that it ended our day, as well as a bunch of others. Our No. 5 HendrickCars.com Chevy was fast and hopefully, we can see a Chevy win here with Ricky (Stenhouse Jr.) out front.”

Ricky Stenhouse was leading when the green flew on lap 194 but he was the lone Chevy up front and the faster Ford of Brad Keslowski behind him ran right over Stenhouse into the wall and out of the race.

With fewer than five laps remaining in Stage 1 of Sunday’s Daytona 500, an eight-car crash broke out at the front of the pack coming out of Turn 2 at Daytona International Speedway.

Rookie Harrison Burton was leading the outside lane with fellow Ford driver Brad Keselowski behind him. Keselowski put a little more oomph into his pushing in order to gain ground on leader Martin Truex Jr. Instead of pulling out front, Burton was turned to the left and into the inside line, specifically William Byron. The two collected multiple cars in the aftermath.

“I don’t know if it was too much,” Burton said. “I just think it might have been in the wrong spot. It’s hard. These bumpers don’t line up as good as the old ones did. Through the testing, I always found that the center was the best. So, when I was pushing Joey (Logano) or whatever, you’ll want to push in the center of the bumper.

“I mean, I haven’t watched a good video of it yet, so don’t take what I say to the bank. Obviously I’m not questioning Brad’s ability. But I think he just got a little wide on my right side and kind of shot me on the inside there.”

Damage ended the days of Burton, Byron, Denny Hamlin and Ross Chastain. All were evaluated and released from the infield care center after exiting their cars on their own.

Keselowski stayed on track. Kyle Busch, Erik Jones and Alex Bowman were also involved in the incident and continued to finish the stage. Truex, who is winless in 67 superspeedway starts (most among active drivers), ultimately won Stage 1 on Lap 65, which ended still under caution.

“At that point, I mean, obviously, it’s over aggressive if it causes a wreck,” said Hamlin, a three-time Daytona 500 winner. “But I saw it coming. And that’s the tough part, like you could see the 21 (Burton) was kind of sideways and out of control and Brad just wouldn’t let him go. Like eventually, you got a let him go and get his reins back.”

Jones was the only wreck driver who managed to stay in the top 10 come stage end. He was eighth, getting three points. Byron, Burton, Busch and Hamlin were 11th through 14th in order. Chastain and Bowman were 16th and 17th, respectively.

“All the guys on the inside seemed to be able to take the push pretty well,” Byron said. “My car definitely accepted the push really well, so I thought we were gonna have a really good day. Sucks that it ends before we get any points.”

Byron’s car sustained severe damage, as it was sent nose-first into the interior retaining wall.

Though Burton didn’t feel a hard hit, he found himself upside down at one point during his tumble through the field.

“The roofline itself is lower, but they’ve got us lower in the car as well, so I’d say my head is about in the same spot as it was in my Xfinity car,” Burton said. “I didn’t notice like any intrusion or anything. I thought it maintained its shape pretty well. … I think it was so far a good testament to the car being safe.”

This is Next Gen’s regular-season debut.

“Stage points really matter, and as a rookie year, it’s big to get them,” Burton said. “I wanted to push for those but obviously I’d love to be out there racing still. I don’t know what I could have done different. It’s hard to be in a lead and say, ‘Oh, I don’t want to be up here.’ You feel like that’s the safest spot.”

With 50 laps to go, Tyler Reddick lost control of the No. 8 Richard Childress Racing Chevrolet due to a mechanical issue, collecting Martin Truex Jr., Kurt Busch and Joey Logano in the process. Reddick retired from the race while the other drivers involved were able to remain in the race. He wound up finishing 35th.

Truex Jr. won both stages. The first stage ended under caution, while the No. 19 Joe Gibbs Racing driver edged out Logano at the line for the Stage 2 victory, collecting a pair of playoff points to begin the 2022 season. Truex Jr. still managed to finish 13th.

Q. Austin Cindric has wanted to be a race car driver his entire life. He’s raced everything. You made it to the top level, a rookie in the Cup Series. Austin, you are a Daytona 500 champion.

Oh, my God. I’ve got so many people to thank. First and foremost Roger Penske, happy birthday. Oh, my gosh. Appreciate Ryan being a great teammate. Obviously he wants to win this one, but I’m so pumped for Discount Tire, Menards, Ford. Everybody works so hard with this Next-Gen car, through this whole process, and damn, I am so excited.

This makes up for losing a championship last race I did.

Q. You’re an Xfinity Series champion, but this is a whole new ballgame. I know you’ve spent a lot of time working just this week on drafting and doing things the right way. How did you adapt so quickly to get it done when it counted on the last lap?

AUSTIN CINDRIC: I’m surrounded by great people. That’s all there is to it. I know there’s going to be highs and lows, being a rookie in a field of drivers this strong. I’m just grateful for the opportunity, excited to climb the mountain we’ve got ahead of us on the 2 team.

# DENOTES ROOKIE
(i) NOT ELIGIBLE FOR POINTS