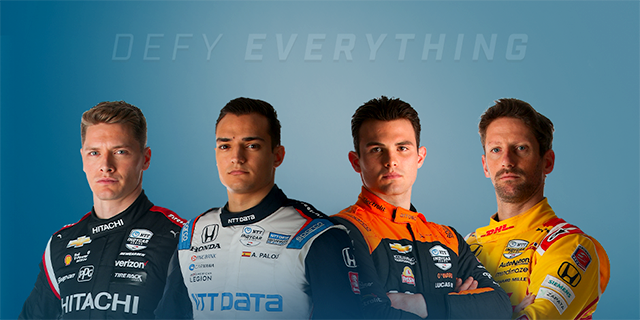 The NTT INDYCAR SERIES launched the newest version of its “DEFY EVERYTHING” brand campaign this morning, setting the stage for an action-packed, adrenaline-filled season featuring 17 races across North America.

DEFY EVERYTHING serves as a bold rallying cry for NTT INDYCAR SERIES athletes as they pursue their championship dreams while facing grueling and dynamic physical and mental challenges along the way.

The 2022 season sees a fresh take on the campaign and pivots to show what NTT INDYCAR SERIES athletes do to prepare for the unknown outcomes that await them on the track – the victories and defeats, close calls and saves, and everything else in between.

“Competing in the NTT INDYCAR SERIES is a bold act of defiance that demands a unique mindset and a fierce physicality that few people ever attain or even fully understand,” INDYCAR Vice President of Marketing SJ Luedtke said. “These characteristics reach extreme levels across our field, and this campaign provides a behind-the-scenes window into the process of attaining them and becoming a world-class competitor in a relentless and dangerous sport. We believe this exhilarating and honest narrative will impress and inspire fans around the globe, heightening focus on our NTT INDYCAR SERIES stars and our ultra-competitive racing.”

NTT INDYCAR SERIES athletes must be at the top of their game physically and emotionally to react as needed at speeds exceeding 200 mph, embracing 5Gs of force in corners while managing body temperature and hydration for hours at a time in the cockpit. The series races on the most demanding and diverse set of arenas across professional motorsports, featuring city street courses, road courses and high-speed ovals.

The music bed for DEFY EVERYTHING, “Run It” by DJ Snake (featuring Rick Ross and Rich Brian), continues to reflect the spirit and attitude of the NTT INDYCAR SERIES, along with its increasingly youthful appeal. The piece was developed entirely in house by INDYCAR’s marketing and digital team. The series partnered with PitFit Training, which specializes in preparing motorsports drivers and pit crews for the demands of professional racing, to film the workout scenes.