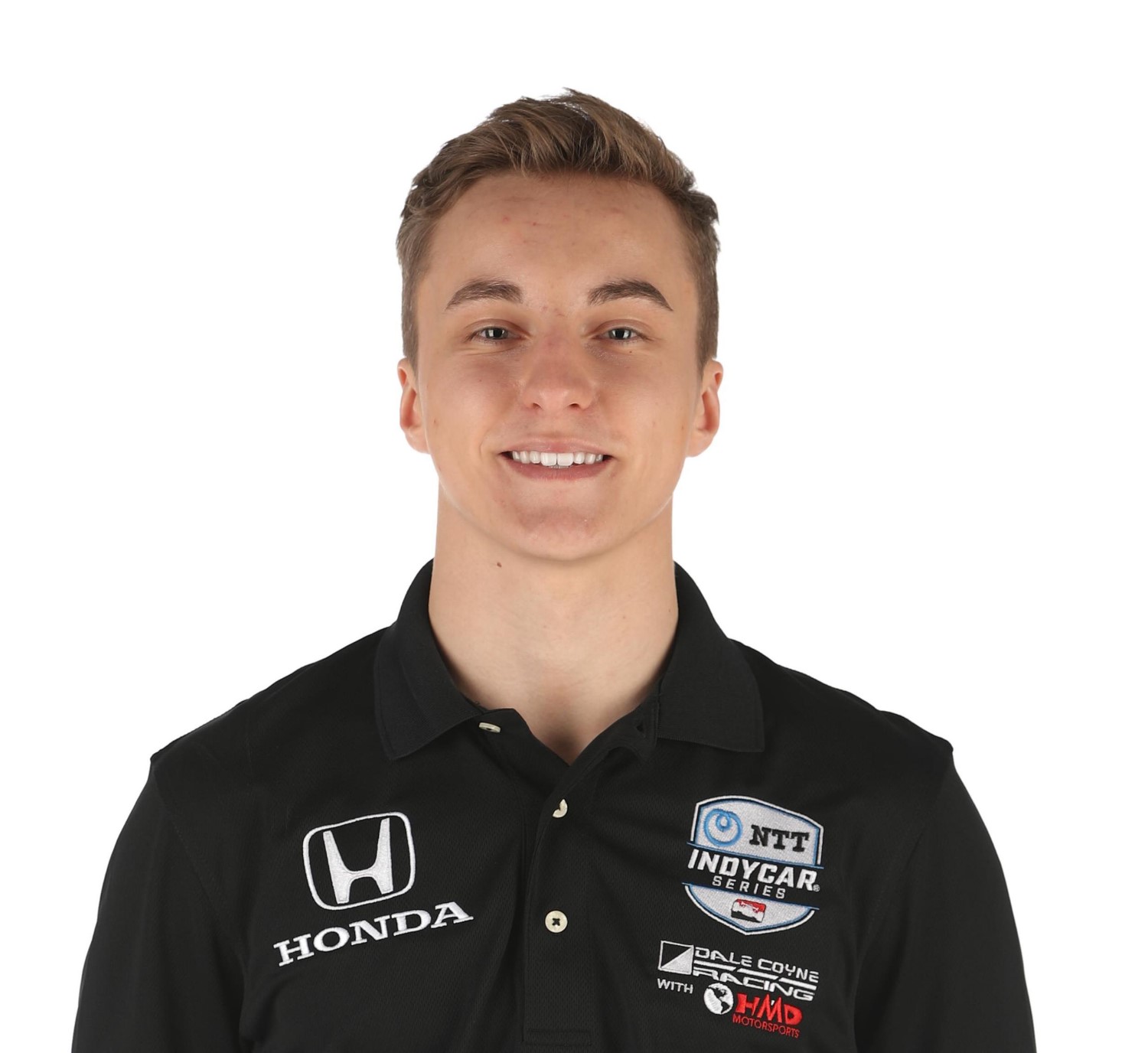 There are six rookies running the first IndyCar race.  As you can imagine, the anticipation is extremely high for these young drivers as they have only had one practice day before arriving in St. Pete.  And this morning was saturated with media events to keep them busy before the late afternoon practice session.  AR1 talked with three of the rookies and asked about their expectations for this season.

AR1 spoke with David Malukas, driver the of the number 18 entry for Dale Coyne Racing with HMD, was all smiles as he addressed our questions.  ‘I can’t believe I am in IndyCar right now.  I have to take it all in.  Enjoy the moment.  This has been my dream since I was a little kid, and I am happy to be living that.”

The 20-year-old Chicago native is a graduate of the Road to Indy series.  Malukas earned 2nd place in the  2021 Indy Lights championship.   His father, who is founder and owner of HMD Trucking, Inc., developed a relationship with Dale Coyne to enable the move up to IndyCars.

“We did all the research of the past year’s progress of Dale Coyne Racing.   Even lately, they were doing very well. I am real excited to be part of the big jump they are having.  I hope to give them a couple more up and running positions.”

“Since I have been with the team, they have made me feel like I was family.  I was all nervous with the new car, and I was freaking out.  No pressure, this is just another car.  It was a pretty short test, I am not used to a just one-day test.  The most important thing is the chemistry between the engineers and the mechanics.   The team is remarkable.”

When asked about his veteran teammate, Takuma Sato, Malukas replied, “What a character.  My first test day in Sebring, he put the radio on, and he was talking to me when I was in the car.   Giving me pointers and helping me out.  And really hyping me up.  I am really excited to be with him this season.”

Another driver who came up from Indy Lights is Kyle Kirkwood, will be  driving the number 14 entry for AJ Foyt racing.  The 23-year-old from Jupiter, Florida, won the 2021 Indy lights Championship and has the 1.25 million dollar scholarship to apply to this season in IndyCars.

When we asked Kirkwood how the deal with AJ Foyt Racing happened, he explained, “It all happened pretty quickly.  I felt that the  Foyt team just seemed like a great fit and with Sebastien Bourdais leaving  and going to Sportscars with Ganassi, that opened up the primary seat with the team.  And obviously there is a lot of focus that comes in with the famous number 14 car.”

‘It is a great start to my career.  A lot of people have said to me that it is going to be tough me being almost the leader on this car.  I am a rookie .  At the same time, I have had a lot of experience over the past.   I keep the car pretty clean in everything I have ever done.”

“And the testing that we had about a week ago, a lot of drivers were spinning off, going into the wall, driving straight.   That is all stuff you cannot do on a street course.  I did not  put a tire wrong the entire two day test.  We have the right mentality coming into our first race at a street course.”

Devlin Francesco is the rookie driver in the Andretti Autosport entry number 29 this season.  The  Canadian-Italian  driver  was born 15 weeks early and weighted less than a pound at birth.  His family had the priest give the baby last rites because they did not believe their premature boy  was going to make it.   And now he is getting ready to run his first IndyCar race this weekend.

AR1 spoke with the energetic 22 year old about his new team.  “I am excited.  A lot of talk about it and now we are actually finally going to do it.  I am really excited and we hit the ground running.   I spent a lot of time in Europe when I was younger so i always thought either IndyCar or Formula One.   ”

“We tend to have more specific goals for each race instead of a goal for the season.  And hitting those specific goals translate to the better results.   Talking about the expectations, I want to finish here and finish here.  You can get caught up in that.  I like to take it more one session at a time.  And lock out the rest of the noise.  That seems to work best.”

“Tomorrow if we take a step  forward on the reds and a step forward on a couple of corners that we see, the results are going to be there.  We could be in the fast 12.  The work you put in translates to what the lap time will going to be.  As long as we know our bits, I think the lap time will be there..  I have only had two and a half days in the car for testing.”

“The pace is very much  there.  I am excited to go out tomorrow.   Qualifying will be only 12 or 13 cars in each session.  That will be a little easier.  And this will be the first time for me on the reds.”

“Andretti works as a team.  We also have MSR.  We have their information to look at too.  We were actually very good in a couple of corners as well.  IndyCar racing is so tight. You don’t want to give up any free lap time up. ”