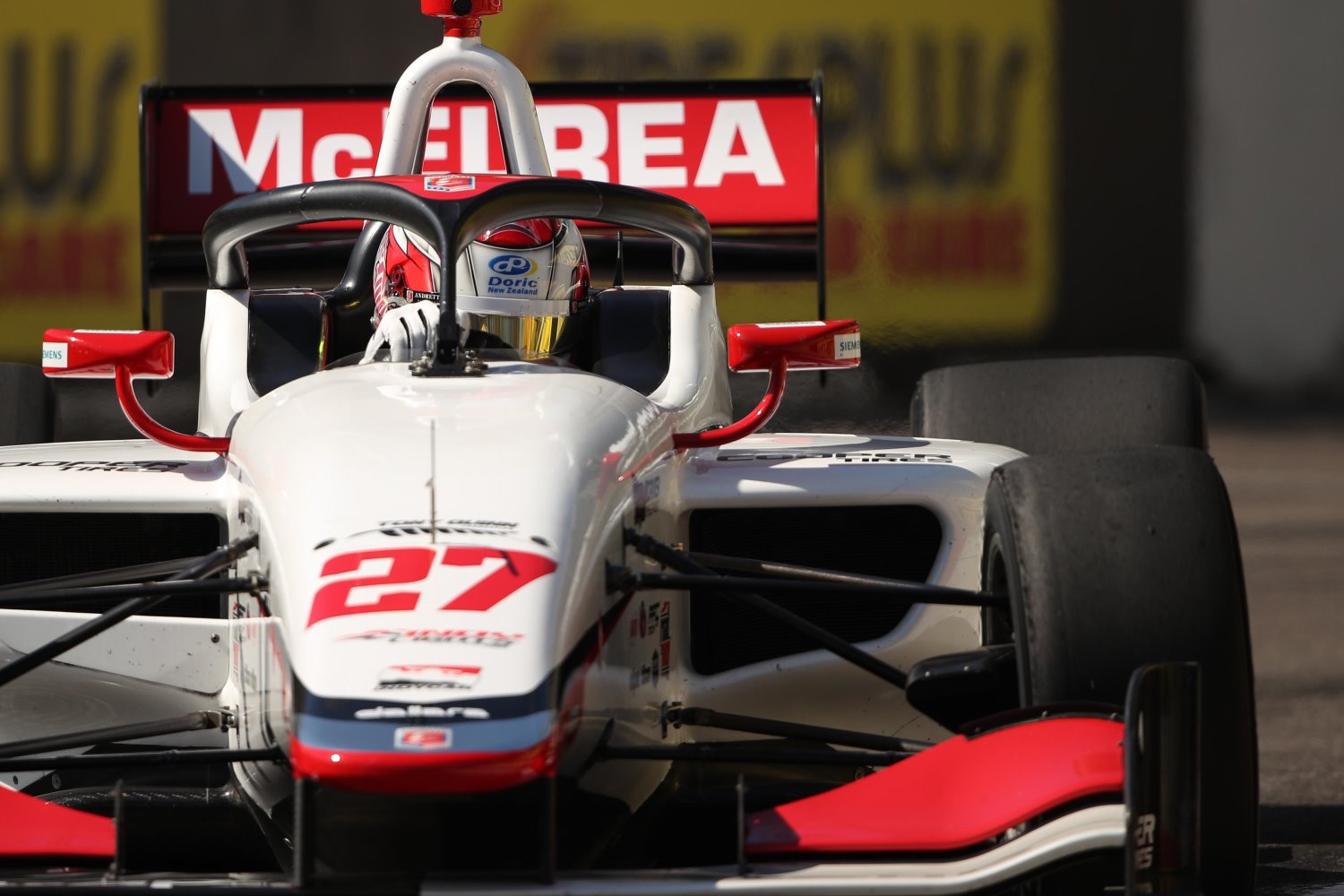 With the pressure maxed out at 10 in a dramatic qualifying session, Indy Lights Presented by Cooper Tires rookie Hunter McElrea posted a statement lap as time expired to score the pole for Sunday’s Indy Lights Grand Prix of St. Petersburg.

McElrea posted a best lap time of 1 minute, 5.2812 seconds in the No. 27 Andretti Autosport entry with no time left on the clock. His rise to first was the last of six changes at the top of the board in the final five minutes alone.

That monster lap put McElrea nearly three-tenths of a second ahead of second place Linus Lundqvist, who put down an impressive time of 1:05.5735 in the No. 26 HMD Motorsports with Dale Coyne Racing entry. Other drivers to hold P1 in the final five minutes of the 30-minute qualifying session were Christian Rasmussen and Benjamin Pedersen.

Even McElrea, who will start his first Indy Lights race at 9:30 a.m. (ET) Sunday (live on Peacock Premium and INDYCAR Radio Network), was caught off guard by the lap.

“I knew I had to do it on that last lap, and the tires were honestly a little bit past their peak,” he said. “I just did a lap. I didn’t expect to be on pole by three-tenths. I thought it was good enough for pole, probably, but when they said, ‘Pole by three tenths,’ I was shocked.”

In 26 Indy Lights Presented by Cooper Tires races in St. Petersburg, Florida, the pole winner has won the race 13 times. It happened in both races here last year with Kyle Kirkwood and David Malukas. McElrea, 22, from Los Angeles, figures he has a good chance to continue that streak.

“It just sums up how good the car is,” he said. “It’s probably one of the best cars, if not the best car, I’ve ever driven. We’ve been fast, and then we’ve had issues that made us third or fourth instead of fastest. It was nice just to have a representative session with everyone on the same tires.”

The session was red-flagged just once with roughly 16 minutes remaining when HMD Motorsports with Dale Coyne Racing’s Danial Frost locked the brakes entering Turn 10 and slid into the tire barriers. His car suffered damage to the front wing and was towed to pit lane. He will start 12th in Sunday’s race.

This came just moments after Rasmussen overshot Turn 10. He went into the runoff area and was able to continue.

Lundqvist opened the day by posting the top speed in the first practice session of the day at 1:05.7856, picking up right where he left off in 2021 when he scored three wins, including the season-finale at Mid-Ohio. Denmark’s Rasmussen rebounded from a mid-practice spin to place second with a best lap time of 1:05.8080. McElrea rounded out the top three with a best lap time of 1:05.9255.