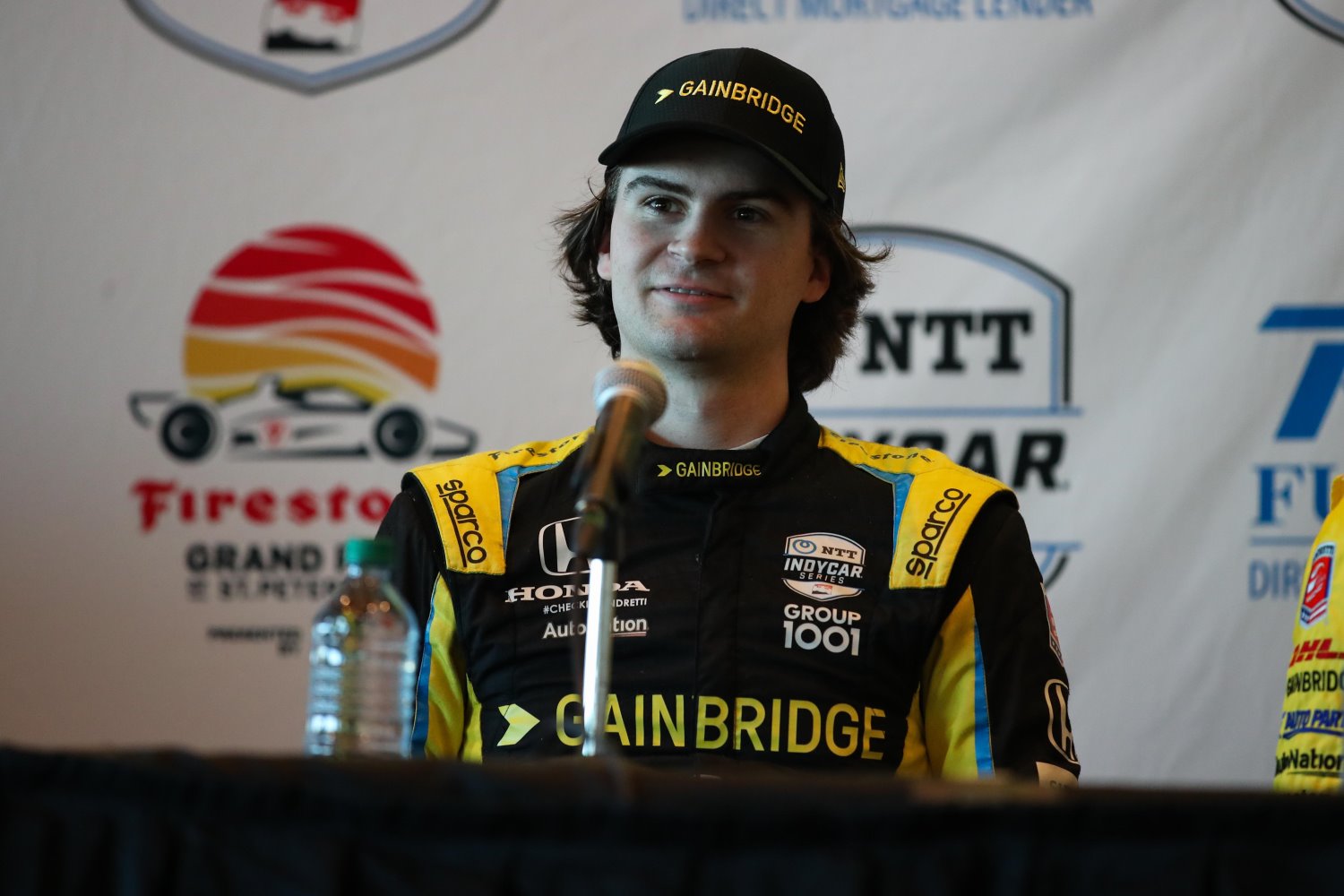 COLTON HERTA: It was good. Kind of for me, left off or brought it back where we left off from last year with the car. It felt really good in the first session. Surprising amount of grip. No, it was all good for me.

ROMAIN GROSJEAN: Yeah, same. Just felt good. The car was performing well as we could see. Obviously quite a bit of traffic out there, but nice to put in a lap, and we did a couple of test items to get a read. I think we’ve got a very, very strong baseline, but I think there’s a little bit more to come if we put it all together. Hopefully we can find that and have fun for the rest of the weekend.

Q. It’s just practice, but this has to be the (indiscernible) you could get out of the car?

I think it’s going to be fun. It’s going to be exciting to learn from the other guys and also give some of my knowledge, but yes, I joined the team, and you never know what you’re going to get. But first run in Sebring last week just brought me that feeling that we were going to go have a good baseline, and that’s the case again today.

We just need to keep working and make sure that every weekend we’re performing well.

Q. On the broadcast they mentioned that Turn 10 had been opened up a little bit. Did you notice that a lot or no?

COLTON HERTA: I didn’t notice that at all.

ROMAIN GROSJEAN: I almost thought it was too tight.

Q. Romain, you were voted No. 1 by the INDYCAR fans in the global INDYCAR fan survey. How does that feel? Give us some words for your fans.

ROMAIN GROSJEAN: I mean, yeah, it felt amazing. After only one year in INDYCAR being voted most popular or favorite driver has been quite incredible.

I’ve got a story; I come from 10 years in Formula 1 before. Came back to racing in INDYCAR, discovered a championship where I think it was a rebirth. I use the Phoenix as a nickname. It’s not only related to the fire thing, it’s related to a rebirth of myself through INDYCAR, to have fun racing, to enjoy myself.

The fans give me so much, and I tried to give back last year through all of my experiences, through the States, through driving the RV, eating far too many donuts, barbecue on the 1st of January and fro-yo. Yeah, it was amazing.

Yeah, I’m almost as American as Colton apart from my pronunciation, which is still a bit French, but I’m working on that. He’s working the same hairstyle as I was when I was his age. He will end up nice and steady.

Q. One of the rules tweaks that INDYCAR is making apparently for this year is they can disable Push-to-Pass for lap cars that are being overtaken. I know you guys have both experienced that, what it’s like on road and street courses. Just your thoughts on that?

ROMAIN GROSJEAN: Yeah, first time I heard about the rules I thought it was if you were going to lap down a car that he was going to have his Push-to-Pass disabled to fight the leader, but no, it’s if you are eligible for a command blue flag, which anywhere there’s a blue flag you have to let by.

So yeah, I wish they had pushed it a little bit further, but it is what it is.

COLTON HERTA: That too, it’s a command blue flag so it makes no difference. You should ask Will because he’ll have some stuff to say about this.

WILL POWER: Every single driver in that meeting except for maybe one or two said we should enforce the blue flag when you’re coming around to lap the back of the field. We should do something about it. So what does that mean when all the drivers say that? Nothing? Because clearly it doesn’t.

WILL POWER: Well, one probably does have a lot of say. He’s pretty credentialed.

Q. Will, you’d agree with Colton then? The series being able to disable Push-to-Pass for a lap car —

WILL POWER: Yes, that would be really great if they did that on the lap that — not when you have to be down a lap from the whole field. It’s kind of ridiculous. At that point it’s the end of the day for that guy and they usually let you go anyway. It’s more the guys at the back of the train trying to stay on the lead lap.

I think they’re trying to work it out. I think they want to do that. I just don’t know whether they have the ability yet with the system.

COLTON HERTA: Well, they’re doing it for if you’re a whole lap down.

WILL POWER: So they obviously have the — I don’t know what it is when you try to get something like this done. It’s very strange. It is what it is.

Q. I guess you guys had the debrief or whatever today. Is there anything else different for 2022, anything new about how they’re going to handle races or anything that you guys heard or want to see?

WILL POWER: My color changed. Yeah, you can recognize my car now when I come up behind. So the lap cars might actually see me a little better now. Like Pagenaud’s car when it was that bright, bright color, people got out of his way. They just like — this bright color just in your mirror, it just was like, man, I need to get out of the way.

COLTON HERTA: Made me slow down when you were in the run-off.

THE MODERATOR: That, ladies and gentlemen, is Will Power, driver of the No. 12 Verizon Team Penske Chevy.

Q. Colton, looking at the time sheet we’ve got teams that have cars up and down the field. Nobody is dominant. Some people are not doing great, but every team has a car that’s out front and every team has a car that’s in the back. Is that because you couldn’t get clean laps? Is this going to sort itself out and we’re going to see differentiation between teams or is it going to be that mixed up all year long?

COLTON HERTA: I think, yeah, it will probably be that mixed up. I think most of the teams are at the point where the rule has been stagnant for so long that there’s not so much to find, so everybody is pretty similar at this point. There are some outliers at some tracks, but I never feel like somebody has a car that’s more than maybe a tenth, tenth and a half better then the second place car. It’s always really close between teams.

Q. Will, do you think that makes it more of a drivers’ series right now? It’s not a car series, it’s a driver series.

WILL POWER: Yeah, the parity is so close. No one has an advantage. We’ve got the absolute everything out of this car you can possibly get out of it, so it’s come down to the smallest of details.

Yeah, it’ll be an interesting year. There’s so many good guys that can win now. You can not really predict even weekend who will be on pole or who will win and then also who really will be in the mix of the championship.

Q. Do you feel you’ll push yourself more this year?

Q. Will, when I talked to you a couple of weeks ago I asked you who was going to be fast and you named off the two drivers to your right so I’m sure you’re not surprised to see Romain and Colton sitting next to you right now.

WILL POWER: No, no, I expected them to be there and also a handful of other drivers, also. It will be very tight qualifying sessions, and it’ll come down to whether you get a clean lap and don’t get held up, if someone doesn’t back up or you don’t go through a yellow. Yeah, it’s going to be that sort of year, which is great. I think it’s very good, very fun.

Q. How does the course feel? Was there any slippery areas, any bumps that weren’t there the last time you raced here, anything different?

ROMAIN GROSJEAN: No, felt pretty much the same. It’s a cool track.

COLTON HERTA: I thought the grip level was pretty good. Yeah, I thought — at least for what I would imagine the balance would normally be for first run on a street course, it wasn’t like that. The front end was sharp and traction wasn’t terrible.

THE MODERATOR: Gentlemen, thank you for joining us and good luck tomorrow in qualifying.