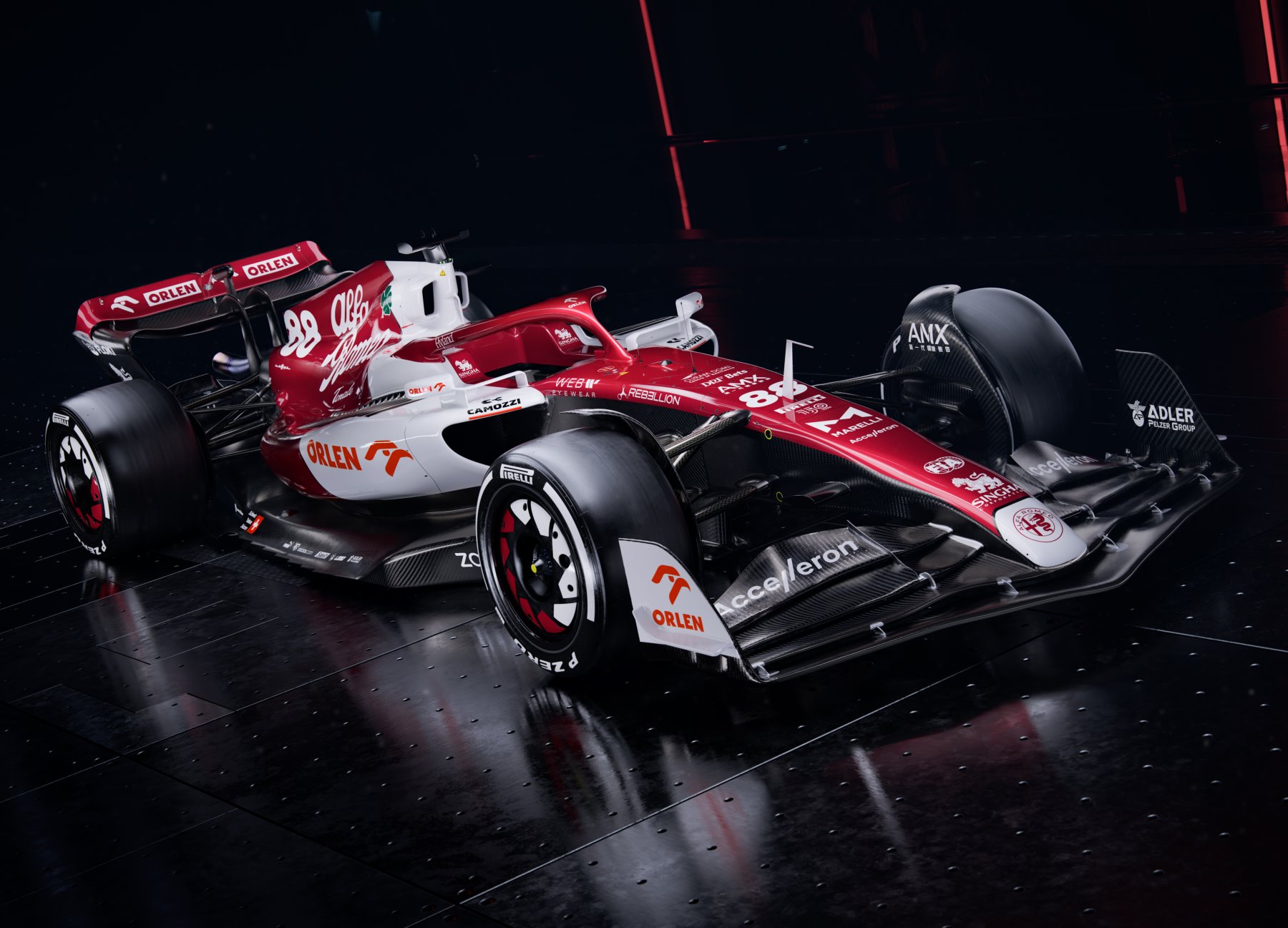 The latest Alfa Romeo F1 Team ORLEN contender, the C42, was finally unveiled, in an eye-catching livery of red and white, completing the grid for what promises to be an incredible season of Formula One racing.

On Sunday, they became the final squad to launch their season – showcasing a livery that they said is “a subtle nod to the past, recalling historical designs of years past and the heritage of Alfa Romeo and Sauber Motorsport” in what will be the Hinwil team’s 30th year in F1.

After a busy week of testing in Barcelona, the C42 – which had been running in a special camouflage livery in Spain – was unveiled via a series of CGI images and videos released simultaneously to media and fans all over the world. The C42 was also displayed in real time in the living rooms, classrooms and kitchens of millions of supporters worldwide through Augmented Reality, via the use of a special QR code promoted on merchandise and online.

The Alfa Romeo F1 Team ORLEN C42 is the first car produced in Hinwil under the budget cap regulations and for the new era of Formula One starting in 2022. Designed by a team led by Technical Director, Jan Monchaux, this car is a radical departure from the past as it embraces the possibilities dictated by the new ground-effect floor, updated aerodynamic package and 18-inch, low profile tires. The C42, powered by a new Ferrari engine, is a racing machine designed to battle, as the new regulations will allow closer racing and competitive fighting from the front to the rear of the grid.

The livery, a product designed and developed by Alfa Romeo’s famous Centro Stile, is a stunning yet subtle nod to the past, recalling historical designs of years past and the heritage of Alfa Romeo and Sauber Motorsport, in the Hinwil team’s 30th year in Formula One. Title partners, Alfa Romeo and ORLEN, feature prominently, and the car is adorned with the branding of the many partners, returning and new, joining the team – a clear display of the growing appeal the team has for companies.

In the hands of 10-times race winner, Valtteri Bottas, and Zhou Guanyu, the first F1 driver from China and the only rookie on the grid in 2022, the C42 is ready to impress.

Frédéric Vasseur, Team Principal of Alfa Romeo F1 Team ORLEN: “The start of the season is always an exciting time, one in which we see the fruit of the work of hundreds of people over a long period of time. The C42 is a car we look forward to seeing racing, not just because it is the first we built in this new regulations cycle, one in which racing should be closer and more thrilling, but because we have the utmost confidence in this car helping the team make a big step forward towards the front of the grid.”

Jan Monchaux, Technical Director of Alfa Romeo F1 Team ORLEN: “As we unveil the C42, it may feel like the start of a new season: we know, however, that this launch is just a milestone in a much longer journey in which our whole staff in Hinwil has invested so much time, resource and energies. Designing and building this car has been a huge undertaking and we can be proud of what we have achieved, but our work is not finished. As always in a new rules cycle, the development curve will be at its steepest this season and we need to continue extracting new performance out of the C42 to make the progress we have set as an objective for ourselves.”
Valtteri Bottas, Alfa Romeo F1 Team ORLEN driver: “I am impressed by our new car, the C42. I think the livery is really beautiful, the Alfa Romeo Centro Stile did a brilliant job. It’s my first car at Alfa Romeo F1 Team ORLEN, of course, which makes it special, and I am really looking forward to being on the grid in Bahrain with it. What is exciting is that we have no idea how that first race is going to pan out. Testing helped us confirm our expectations of where we stand, the progress we have made with the car, but now we are getting closer to the moment that really matters. Since I joined, I have seen so much motivation within this team: everyone is pushing a lot, trying to work harder than the others to be competitive, and that in turn gives me that extra boost when I am in the cockpit.”

Zhou Guanyu, Alfa Romeo F1 Team ORLEN driver: “I am fully pumped up for the season and seeing the C42 in the livery in which I will race it definitely makes it real. We are at the beginning of a new era, with new cars and new regulations, and this creates an opportunity for all teams to make progress since we are all starting from scratch. Everyone at Alfa Romeo F1 Team ORLEN has been incredibly helpful since I joined and seeing all the hard work, the commitment and motivation from everyone, in Hinwil and at the track, fills me with pride and excitement. I can’t wait to be on the grid with this car and work with my team to bring home the results we are targeting together.”

Robert Kubica, Alfa Romeo F1 Team ORLEN reserve driver: “The start of a new season is always a time where expectations, hopes and plans come together: this year, the stakes are even higher as we are taking a bit of a jump into the unknown with the new regulations. There has been an incredible amount of work that went into this car, the C42, and I am looking forward to seeing what the team can achieve with it. In my role, I am aiming to provide as much help as possible in the development of this car: we know how big the margins of improvement are at this stage in the lifetime of a car and we know that each upgrade can make a difference, so the work we do back at base is going to be crucial to deliver results trackside.”