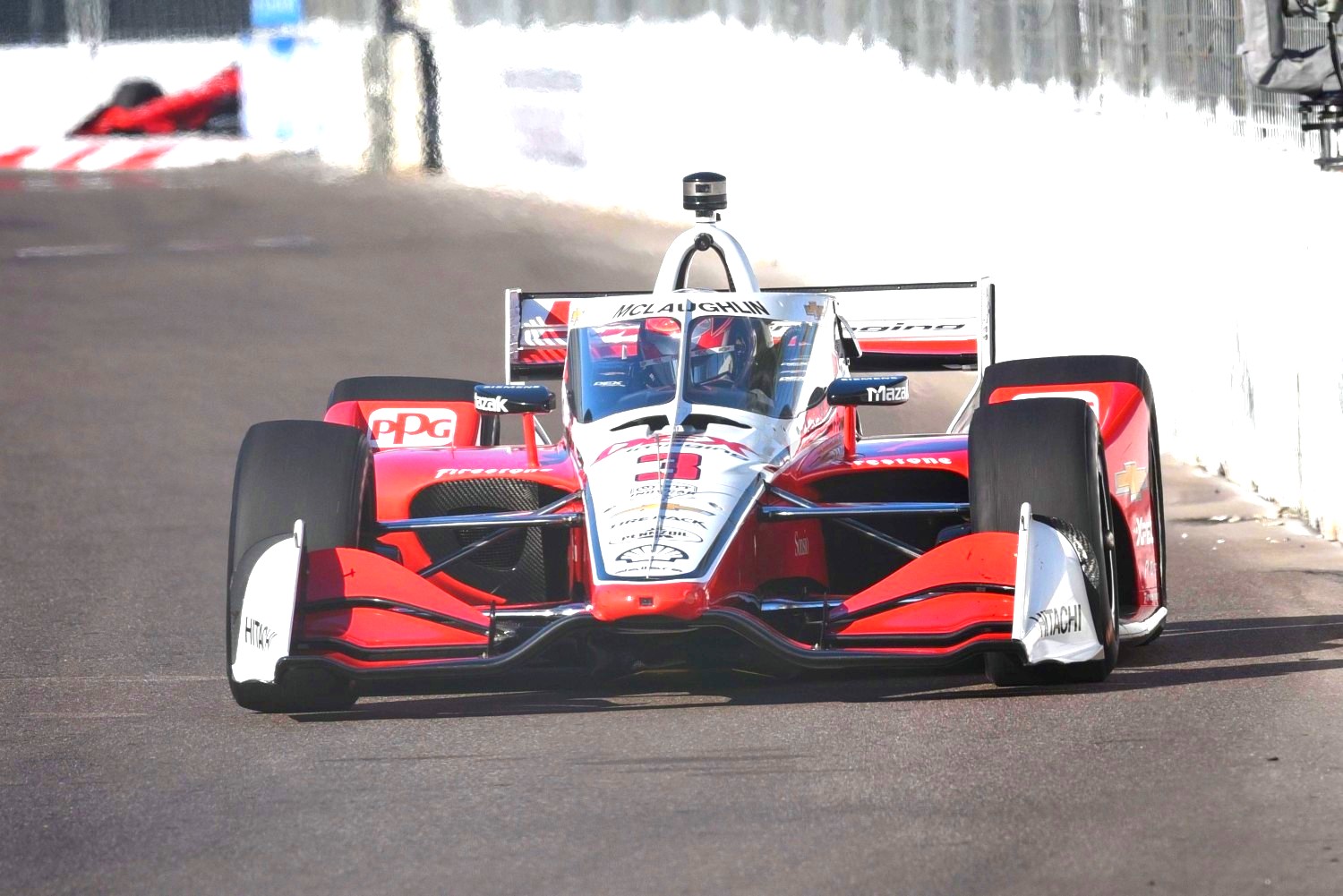 Polesitter Scott McLaughlin led early, kept his cool when he was stuck in traffic, then held off defending series champion Alex Palou (Ganassi Honda) under heavy pressure, to win his first IndyCar race – the Firestone Grand Prix of St. Petersburg.

McLaughlin from New Zealand came to the USA as a multi-year champion in the Supercars Series, learned a lot in his rookie IndyCar season last year, and then came out of the box this year and won straight out.

McLaughlin won by just 0.5 seconds over Palou. Palou pressured McLaughlin hard for many laps, but the Kiwi kept his composure and never put a wheel wrong all day.

“I’m exhausted,” McLaughlin told NBC Sports’ Marty Snider. “What a day. I’m out of breath here. It was crazy. I really struggled the last couple of laps to keep my head and save the fuel, but we did it. It’s unreal. Love you in Australia and New Zealand and miss you guys.”

McLaughlin’s Penske Chevy teammate Will Power took the final podium position in 3rd. It was the 11th time Team Penske has won this race.

“First of all, Scott [McLaughlin, race winner] did an amazing job. Congratulations to him on his first win,” said Palou.

“Super happy with the #10 NTT Data Honda car, it was really good today. If you look at how the result we got today, compared to how [poorly] we started the weekend, I think the entire Chip Ganassi team did an incredible job in coming back and scoring our first podium [finish] of the year. We came up a little short there at the end, but we were close, we were very close. If this is one of our worst races this year, I will be really, really pleased.”

Herta, the defending Grand Prix winner, spent much of his day in the top five but never challenged for the win. He had to pit earlier than some of the other contenders after the crew of his No. 26 Andretti Autosport Honda didn’t get his tank full during a stop. He finished fourth.

That caution, caused by rookie David Malukas hitting the wall in Turn 3, was a lucky break for McLaughlin. His Team Penske teammate, Will Power, had been charging toward the front. Power used the primary black tires — which are slower at first but more durable than the red alternate tires McLaughlin started with. That allowed Power to cut a second away from McLaughlin’s lead every lap until that yellow flag. Power finished third.

For the first half of the race, the only lead changes happened thanks to pit stops. Alexander Rossi only led because he did not stop, and had to give way to six-time series champion Scott Dixon and then Rinus VeeKay.

McLaughlin took the lead for good on lap 80, after Dixon pitted from the lead. He held off a late charge from Palou to earn the 11th Grand Prix victory for Team Penske.

McLaughlin led a race high 49 of 100 laps around the 1.8-mile, 14-turn street course in front of the largest crowd in the history of this event.

Alex Palou parlayed his first career win last year in the season opener at Barber Motorsports Park into his first Astor Challenge Cup for Chip Ganassi Racing. And the winner of the season opener in the last three NTT INDYCAR SERIES seasons has gone on to win the title in the same year.  Can McLaughlin keep the streak going?

McLaughlin finished 14th in the standings, with a best finish of second, and earned series Rookie of the Year honors in 2021 despite the strain of not seeing his family since 2020 due to pandemic-related global travel restrictions. McLaughlin sat in front of his winning car in Victory Lane, celebrating with his family via videoconference on his phone.

“Thank you to Roger Penske, everyone,” McLaughlin said. “Yeah, DEX Imaging jumping on board, trusting me, and then Roger Penske and Tim Cindric giving me the opportunity to come here.

“I miss my mom and dad dearly and my family. Wish you guys were here. What a day.”

Josef Newgarden started ninth and finished 16th in a frustrating INDYCAR SERIES season-opener on the Streets of St. Pete on Sunday afternoon.  Electing to go with a three-stop strategy, different than most of the field’s two-stop plans, Newgarden seemed to be fighting from behind all afternoon long, trying to make up time on a busy racetrack where much of the field was evenly matched.  Newgarden’s No. 2 Hitachi Dallara/Chevrolet had pace, but was constantly stuck in traffic, which cost him time to the leaders and the eventual race winner.  Eventually, the two-time series champion had to settle for a disappointing 16th place finish.

“It was a tough weekend on the No. 2 car. It just didn’t pan out our way. We tried a different strategy than most, and it didn’t seem like the racing gods were shining on us this weekend. There are a lot of positives. We have a lot of new people on the 2 car and I felt like everyone worked super-well together. We’ve learned some things to start this year off, so our goal is to continue to build on this first weekend of the year and get better throughout. I can’t wait for the next one at Texas.”

SCOTT MCLAUGHLIN, NO. 3 DEX IMAGING CHEVROLET, TEAM PENSKE – RACE WINNER: “This unbelievable. Thank you to Roger Penske and everyone who put their faith in me… DEX Energy for jumping on board and trusting me, and Roger Penske and Tim Cindric giving me the opportunity to come here. I miss my mom and dad dearly and my family… I wish you guys were here.

LATE-RACE FIGHT WITH ALEX PALOU: “It was crazy. I really struggled those last couple laps to keep my head to save fuel and all that stuff. We did it. Chevy gave us the fuel mileage. The drivability this weekend has been a big change. To win DEX Imaging’s home race is unreal. I love you Australia and New Zealand. I miss you guys and thinking of all you guys in the Queensland with all the floods at the moment. I just can’t believe this!”

MORE ON THE RACE: “These are great fans. We have great sponsors like DEX Imaging and Chevy to help us along the way. The trust of everyone in me really kept me going, including my wife. My wife has been the absolute backbone of everything and kept the belief in me. She’s a gem.”

YOUR PREVIOUS BEST RESULT ON A STREET COURSE WAS 11TTTH. WHAT’S THE DIFFERENCE FROM ONE YEAR TO THE NEXT? “I was worried about my average so I had to come out and win! I’m just very proud. We put a lot of hard work in – not just me but all these guys on pit stop practice, engineering from Ben (Bretzman) to make me good to give me a car that I like. I’m just pleased.”

WHAT HAS ROGER PENSKE’S SUPPORT MEAN? “He was the one who calmed me down last year. He’s the one who said that it’s a long story and not a short one. To pay back that faith and prove the trust he put in me is a very proud moment.”

YOU WON SO MUCH IN SUPERCARS BUT DIDN’T LAST YEAR. WAS THERE DOUBT? “There’s always a little bit of doubt. But you know you can do it deep down. Everyone was asking how I was going to go at the start today, and I was like, ‘I’ve led a few races from the start. I just didn’t do rolling starts.’ It’s all about going back to what I know. I knew I could do it. It’s all about belief. To anyone out there, you can do whatever you want. You just have to have belief in yourself and get it done.”