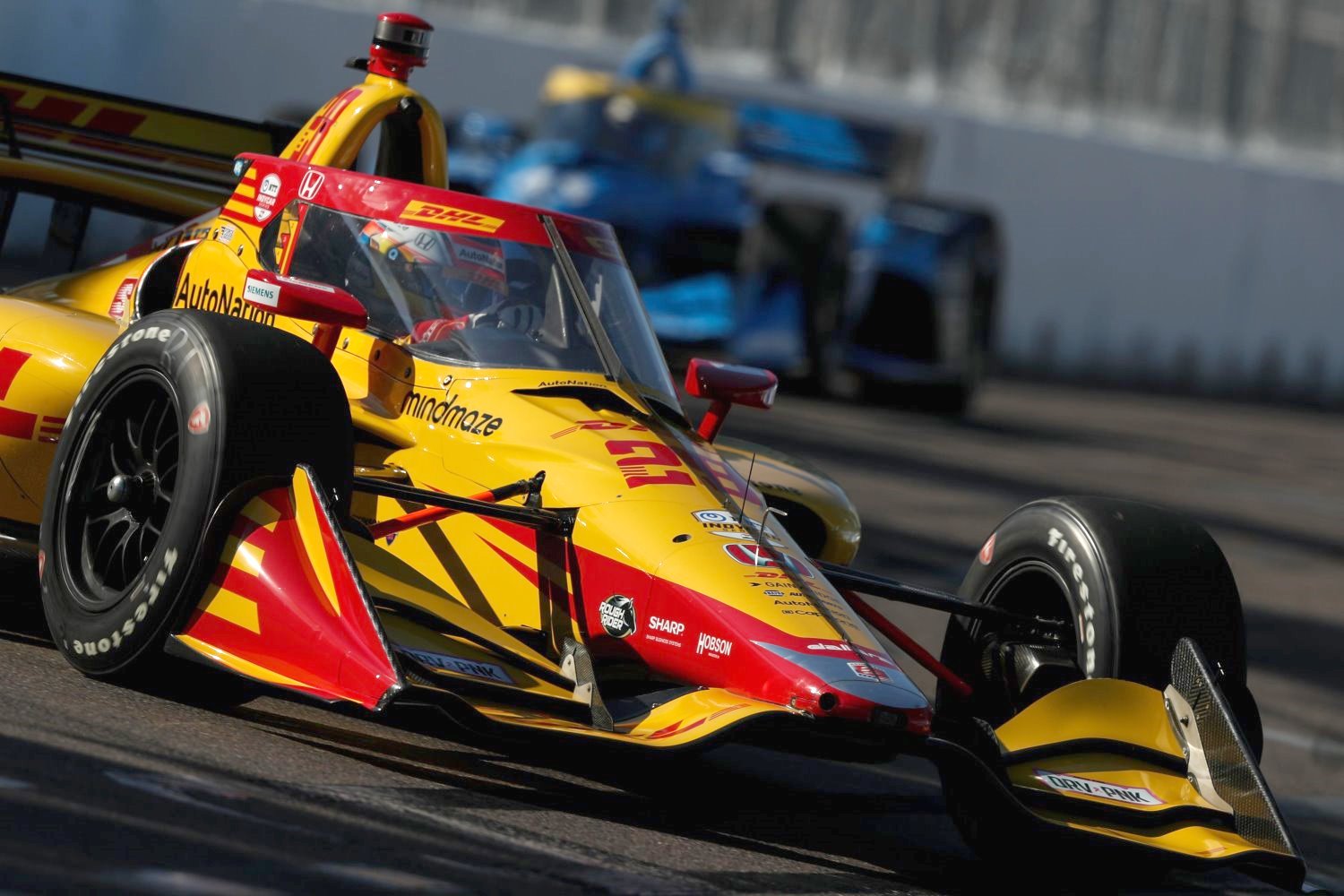 Seeing how great F1 racing is with DRS, IndyCar would indeed be wise to deep-six the hybrid engine idea and implement DRS instead.

Why not just implement the new 2.4L engines with DRS that can only be used offensively, and not defensively?  It will give the current overweight car the extra speed drivers are asking for, and passes per race will increase significantly.

Just a short opinion piece on IndyCar going through all the trouble of implementing a ‘spec’ hybrid battery and electric motor KERS system into their race cars, vs. another F1 technology, DRS, that would, in fact, improve the racing, save the teams and manufacturers a lot of money, and make the cars 200 pounds lighter.

What is the real purpose of implementing hybrid technology?  To attract more engine manufacturers? Well, that ship has already sailed.  Back in 2009 when F1 implemented KERS, hybrid passenger cars were all the rave.

Manufacturers are now focused on producing 100% electric cars for the future.  Hybrid cars will soon be obsolete.

The benefit of hybrid is to give more power to the driver, like IndyCars currently have with turbo push-to-pass…….to stop follow-the-leader parade racing.

OK, well enough, but KERS does not work on oval tracks where the driver hardly ever uses the brakes. There is talk of the drivers having a ‘wanker paddle on the wheel to drag the brakes and capture the energy back into the battery. Like riding your brakes on the highway.

OK, Ok.  Attempting to be funny,  and maybe it will be called something else, but only wankers brake on straights while racing, and pressing the wanker paddle is effectively dragging your brakes on the straight to capture energy and store it in the battery.

Without a ‘wanker’ paddle, IndyCar’s KERS hybrid technology is useless on their ovals – the car carrying 200 pounds of useless dead weight.   While a driver uses the wanker paddle to charge his battery, the car behind blows past, and he’s just lost a position, i.e. gone backward instead of forward.  Isn’t that what wankers do, go backward through the field?

But what good is push-to-pass, or electric motor power boost via KERS, if the driver in front can use it also as a defense mechanism to prevent the driver attempting to pass from doing so. It defeats the intended purpose.

All the cost to implement hybrid, and the weight penalty to the car that hampers driveability, and the fans in the grandstand never know it is being used. The fans, i.e. the paying customers….

DRS would have been a better technical solution

Implementing the F1 Drag Reduction System (DRS) on the cars would be far less costly, save 200 pounds of wasted weight, and improve the ability of a driver to pass.

These two videos explain the benefits of DRS quite well:

DRS is visible, KERS is not.  Fans can see DRS from the grandstands and on TV and humans are indeed visually excited.

DRS will save the teams and manufacturers huge amounts of money versus a hybrid implementation.

DRS will save 200 pounds of added weight that IndyCars really do not need.  Hampers the handling of the cars (and hence the racing) and makes the cars less safe for the drivers in accidents. It’s also a negative impact on tire wear.

DRS can only be used as an offensive tool, which will produce more passing and repassing.  Don’t tell us DRS ruins the racing by making it artificial.  The racing in F1 is super exciting and DRS is a major contributor to that.

DRS works on ovals and road courses.  KERS only effectively works on road courses, unless you add a ‘wanker’ paddle for the ovals.

IndyCar already has P2P with turboboost. KERS electric power boost is really the same as adding more turboboost. So keep P2P and add DRS (instead of hybrid KERS) and IndyCar will have some really remarkable racing at far less cost than adding KERS/hybrid.

It’s time for the power brokers in IndyCar to think about what they are really endeavoring to achieve with the sport, and the cost and effort to do so.