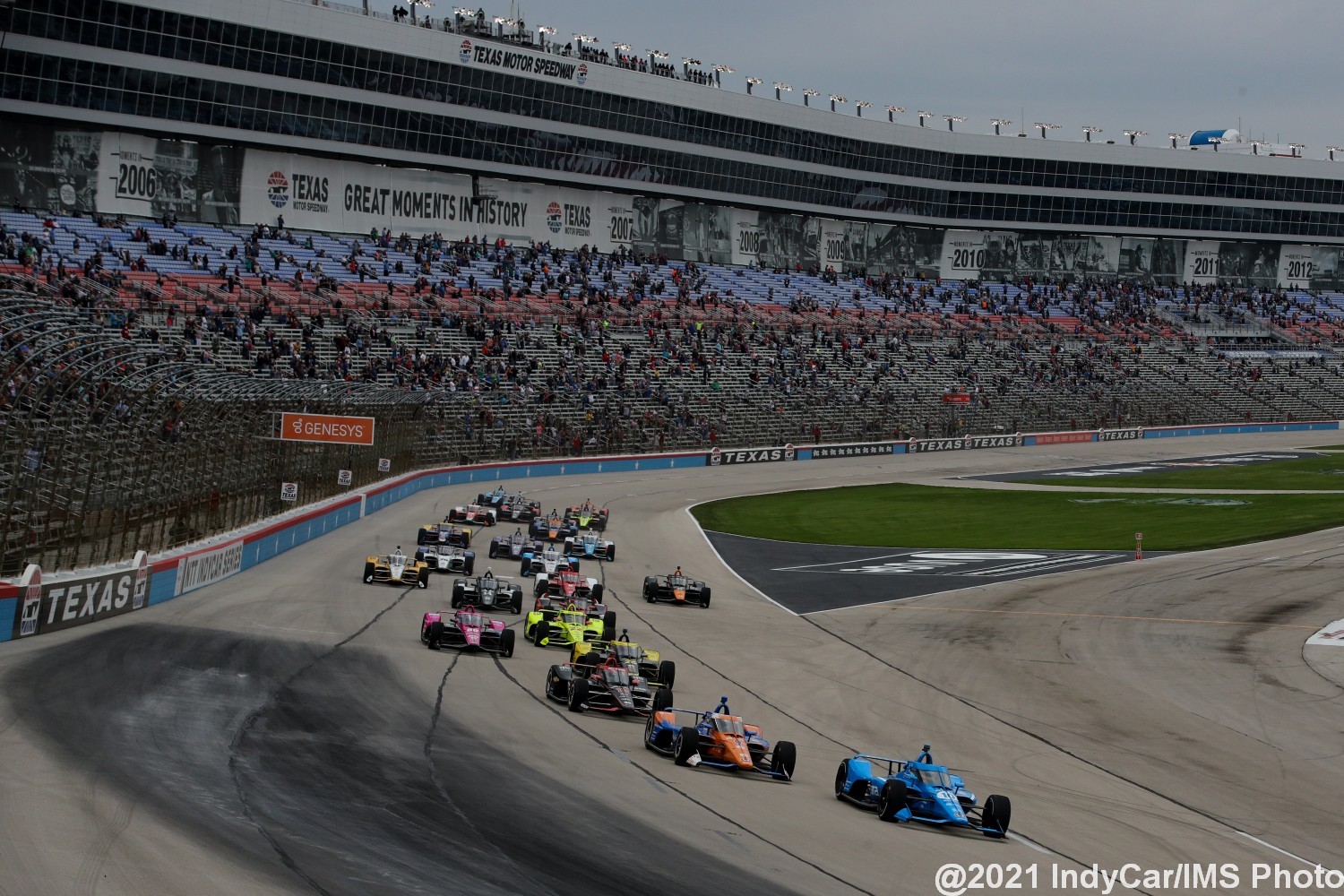 Good morning from Fort Worth, Texas, as the NTT INDYCAR SERIES gets ready to run the XPEL. 375 at Texas Motor Speedway this weekend, the first oval race of the 2022 season.  The race is being held a few months earlier than the regular June date, which might pose several issues.

The weather has been cooler than I imagined when I saw the 70 and 80 degree days predicted last week.  This morning’s temperature only reached 41 degrees.  Not the ideal situation for the Firestone tires to perform at their best.  So we will see how the first hour-long practice session goes, scheduled for 10 am CDT.

The next issue is the unique surface finish on the second lane of the 1.5-mile track that was put down to give the NASCAR Cup Series an extra amount of grip on their Goodyear rubber.  The material is called PJ1 TrackBite and is sprayed on the surface.  It is black in color so you can easily see it.  But with the Indy cars, which are lighter than a stock car, the surface creates less grip with the harder Firestone tires.

Rob Buckner, Chevrolet Program Manager for the NTT INDYCAR SERIES, added his thoughts on this issue.   “The racing surface at Texas is always hard to predict with the different treatments to the tarmac and its impact on the degradation of the tires.  Throw in the unknown of temperature ranges and this could be a completely different TMS than what we’ve experienced in the past. It definitely puts a premium on qualifying and track position. ”

This will be the first oval race in the IndyCar series for the seven-time NASCAR champion, Jimmie Johnson.  In his second season with Chip Ganassi Racing, Johnson is no stranger to the winner’s circle at this track.  With seven wins here, the no 48 Carvana Chip Ganassi Racing entry driver was disappointed when a test session planned for last week was canceled due to unfavorable track conditions (track and air temps were below minimum).  Johnson did run a test in an Indy car here last October to determine if he would run the ovals this season.

Johnson spoke to the media earlier this week.  “I did find that the line is a little different in the INDYCAR. Just the potential of the car’s cornering ability allows you to run a little narrower entry and exit. With that, you don’t have to flirt with the transitions of the corners in and off as much. Speed was up tremendously. Also a slight adjustment in my line. But as the test session went on, I was really excited to see how many similarities there were from my NASCAR driving experience and car setup to what we had going on with the INDYCAR.”

“I really believe all tracks have their own rhythm to them. Ovals are a little easier to find in some respects, maybe come quicker just because the lap is shorter. It’s easier to pick up the rhythm of a track with four corners versus one with 17 or something like that.”

“There is a rhythm to Texas. It is much different than what I have felt in the Cup car. But where it is similar is just how aggressive you can be in turns three and four, then really
how cautious you need to be turn one, kind of getting the car pointed and heading off the back straightaway for turn two.”

Qualifying is scheduled for 1 pm CDT today, starting in reverse order by entrant points.  Each driver will get two warm-up laps and two green laps.  A second practice session is scheduled for 4 pm CDT when temperatures are predicted to be in the 70s.

Check back for updates today.